The Dude Abides No Oppressive Regimes 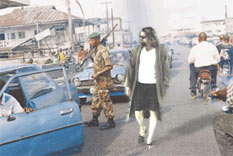 Sergeant Hercules oversees his troops in the Ivory Coast.When you picture rebel leaders certain names and faces come to mind. Che Guevara, Lenin, Luke Skywalker, those who battled for a cause against a government they believed to be evil. Then there's Sergeant Hercules. You may not have heard of the good Sergeant, but people in the war torn Ivory Coast certainly have. In revolutions it can be pretty hard to judge the good from the bad, especially in Africa where regimes tend to last about as long as milk, but I can honestly say Sergeant Hercules is my favorite rebel commander ever.

Wearing combat trousers and worn blue plastic flip-flops, Hercules swills his beer and chats to fellow rebels at a fuel station on the north side of Ivory Coast's second city Bouake, which they have held since an uprising on September 19.

A soldier at a roadblock starts shouting angrily and waves his gun at a white pick-up truck carrying more rebels.

Hercules walks over, lays his hand on his comrade's shoulder and the shouting subsides.

Essentially Hercules is Jeff Bridges' character from "The Big Lebowski", only with an Ak-47 and several hundred gun-toting soldiers. Being basically the polar opposite of Thunderdome and desperately needing a new hero to idolize I decided to find out everything I could about the good Sergeant Hercules. While he has yet to install himself as the undisputed "relaxed warlord" of the Ivory Coast, he certainly has plans to do just that. From a server in the Ivory Coast region I turned up not only an itinerary for Sergeant Hercules, but also his plans for a reformed Ivory Coast government. 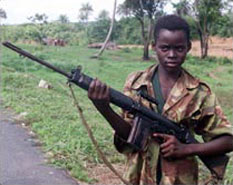 When 13 year old boys are carring automatic rifles, I think I can agree that a region needs to "chill out".

October 1st, 2002 - Possibly talk to a soldier in one of my platoons. Maybe not, depending on what time I get up. If I get up before three PM I should walk over to the soldiers standing around and tell them that maybe they should shoot at a building nearby. I would get up and tell them that right now but I'm too tired from asking Mudengy to go loot clean socks for me. After I do my duties I will go to the bowling alley and have some of our prisoners bowl with me. I think they let me win.

October 2nd, 2002 - Drive around for a couple hours and hope my Phish CDs come from Amazon.com. Get drunk around one in the afternoon and then accidentally shoot one of my soldiers in the arm while trying to twirl an assault rifle. Man, I hope I just hit his arm anyway, it is such a big bummer when one of them gets hurt bad. What a hassle!

October 3rd, 2002 - Storm presidential palace and shoot president, like around dawn is what I said in the meeting last week, but I'm guessing closer to noon. If it is noon we should probably bring grenades. After we storm the presidential palace I am totally just going to lay on the couch, eat Cheez Its, and play Madden against Mudengy. He cannot handle my Rams offense, I am like 50 and 2 against him. He always picks the Seahawks.

October 4th, 2002 to January 1st, 2003 - Just relax man, take a load off now that the revolution is over and let things happen however they want to. Let Mudengy handle rounding up and murdering all of the opposition, that's so totally not my thing.

January 1st, 2003 - Rename "Ivory Coast" to "Awesome". Take a nap and eat tacos, possibly not in this order. Start Mudengy on sending spam e-mails to United States using the forged name of the President's widow in an effort to raise GNP of Awesome.

Obviously Sergeant Hercules is a revolutionary who has his priorities straight from a very new age standpoint of "love yourself first". In fact his lackadaisical attitude to military planning continues in his three year plan for rebuilding the Ivory Coast as his utopian nation of Awesome. Remember, as with the itinerary, these are in his words. 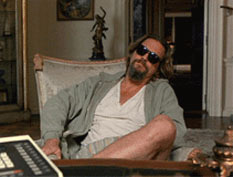 Future President Hercules relaxes in his office just before falling asleep while watching "The Family Feud".The first thing we need to do is just chill out a little bit. All of the shooting and rioting can wait for another time, just calm down, okay? Then once everyone is nice and calm maybe we could talk about some stuff. Mudengy has some good ideas but sometimes I don't know what the fuck he is talking about. He said something about "controlling the media by seizing the radio stations" but I just listen to the reggae station all day anyway and maybe if they played a little less Marley to give some air time to some newer people that would be cool but I don't think we need to go in and shoot the place up. If I'm president we could probably just call them and ask for them to play some new stuff.

For government I like the idea of keeping things relaxed. Maybe a meeting with congress or whatever once a week outside by the Presidential pool and then we could get some pizza and play ping pong or something. Smoke a J and just cool our heels after a lot of serious talk. I think I want to make a law that there can't be any yelling inside the presidential mansion either, that kind of stuff is just garbage and kills my buzz in a hurry. I don't know, maybe Mudengy could shoot people who yell or strangle their families with piano wire or something. That's a whole other problem though because piano wire is hard to find. I don't want to even think about it right now so I'll just move on to the economy.

The economy is pretty crappy right now and I think that's because everyone is too stressed out by all this trouble man. Why not just chill out, maybe have a burger and a shake or something, watch some TV or play some video games and get over it. There was this great book I read that was about "willing away your troubles" man, and it works, you just need to put them out of your thoughts and they will go away. If you're kids are starving to death, forget about them, they'll go away. If you have AIDS, forget about it, it will go away. You just need to visualize a place where you can, you know, really be calm. Like an island in the ocean or a rainbow or something.

The following people are also really messing with my vibe, for serious:

Mudengy promised he would totally take care of it so don't worry about it, things will all work out in the end. The national anthem for Awesome is going to be really cool. I was thinking something by the Dead, but I think something classier from like Floyd would be cool. What do you guys think?

Sergeant Hercules is truly a god among men. Were he running for election here in the United States he would most assuredly receive my vote. Nothing shouts "well-run government" like flip flops and a morning beer. I'm not kidding, if the president is so laid back about things he can walk around in a bathrobe and sandals and drink a beer before he even takes a shower then I would worry a lot less about the state of affairs here. Here's to hoping Hercules flies to the United States and somehow becomes a lifelong US citizen in the not too distant future.

Spraying Faygo All Over the Internet

Totally crazy 2 the max white boy rappers "Insane Clown Posse" have been given the old review treatment courtesy of our TruthMedia section. In case you don't already know, the purpose of this section is to inflame idiotic Internet fanboys by writing factually incorrect negative reviews of various forms of entertainment. Inevitably the fans take the bait, despite the fact that all of this is revealed very openly on our site at the top of the TruthMedia section. I think the ICP fans might be the most idiotic of the bunch to date, but only time will tell!

The Insane Clown Posse was able to generate a bit of buzz with their next two releases, "The Jackal Brothers" (a concept album of sorts, detailing their bond as brothers) and "The Great Milinko." However, they shadowed Eminem each step of the way, hoping to be the first from Detroit with a major record deal. That hope was crushed when Dr. Dre discovered Eminem at a sold-out show at Detroit's State Theater and immediately signed him to a massive contract. The ICP was once again one step behind... and now very angry. They had been opening up for Eminem for years and they believed that they deserved a break, never realizing that all along it was their utter lack of originality and willingness to copy every other popular white rapper that was precluding them from ever being a top draw.

Feel free to share this link to our review with friends on IM, IRC, and on other forums. Please do not spam the review all over the place, as the only thing more idiotic than Internet fanboys is spam. So get informed about your favorite clown-themed rappers and rustle up your podners for this TruthMedia Review!