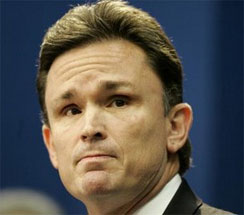 Feed Weis raw meat or he'll die!Children are being shot and killed nearly every day on Chicago's south and west sides. Over the summer three Chicago police have also been murdered for things like their car, their motorcycle, and for walking somewhere while being coppy. It's so bad in some neighborhoods that cops can be swarming the scene of a shooting and within sight of the huge mass of cops another shooting will take place.

Early this week Chicago Police Superintendent Jody Weis, who looks like he escaped from a super soldier program, called together the leaders of some of Chicago's street gangs and threatened them with federal RICO prosecutions and confiscations if the murders continue. This was a controversial move that inflamed the incognescenti of talk radio and their slack-brained legions of mouth-shitters. Some likened what Weis did to negotiating with terrorists. Others questioned whether Weis might be violating the civil rights of the gang leaders. On Thursday the controversy took a turn for the surreal. 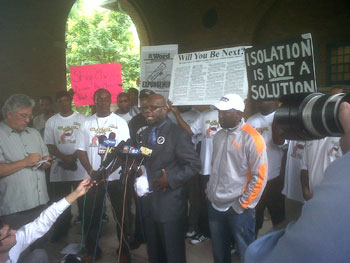 At a news conference organized by self-identified gang members Thursday morning, several speakers complained that police and city officials do not respect them, and that the only way to curb violence is to provide jobs and improve their community.

Dupree El, 34, identified himself as a member of the Conservative Vice Lords, and said he has pride in his affiliation.

"It wasn't to tear down our community. It was to uplift the fallen stages of humanity," he said. 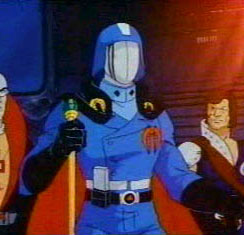 Sssitizens of the world, GI Joe hassss violated our consssstitutional rights!The bad guys usually only do this sort of thing in Batman or GI Joe cartoons. The Vice Lords spent most of their time complaining about not being respected by city officials at a scheduled press conference where the media was invited and allowed to ask questions. Just complaints. They didn't even have a rocket that's loaded with a gas that will turn all the money in the world into Vice Lord bucks.

You could suggest that perhaps the Vice Lords are cynically (and brazenly) trying to fight a PR war against the city as they continue to engage in the drug trade and gang murders, but the Vice Lords disagree. These are the good guys with a long history of violence. Some of the speakers at the event claimed that all the violence has to do with drug dealers and is completely unrelated to all these community-minded civics gangs that have formed in Chicago. Gangs to help the community. And the fallen stages of humanity, like some sort of anti-mutant gang in Fallout. Oddly, the gang members tend to be the ones getting shot when the bullets don't miss and hit some babies, but maybe that's because the drug dealers don't respect the gangs either.

To be fair to the Vice Lords, and believe me that is topping my agenda at all times, some of the things they pointed to as problems in their rambling press conference really are underlying problems of the violence. Addressing poverty and helping people find jobs would lower violence. Everybody knows it. No one is disagreeing with them.

Corruption and nepotism in the city government were also cited by representatives of the Vice Lords as possible reasons for why children were being shot every day. As much as I hate literal giant baby Todd Stroger and his campaign to give all his 10,000 cousins jobs designing underwater wheelchair ramps in dog parks for 200k a year, I don't really think he is out there encouraging drug dealers to open fire on all these completely innocent, non-criminal, non-drug related gangs like the Vice Lords, the Coke Wizards, and the Freebasing Heroin Angels. 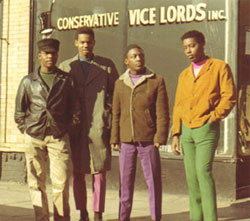 Hmmm, the font needs to be bigger on VICE and LORDS. There was also a lot of dubious bragging from the Vice Lords about giving people an alternative to drug dealing.

"The problem with them is that they're giving us an ultimatum - quit - instead of an alternative. But we're offering these young men an alternative, saying, 'Get off the corner selling these bags, and come to this construction site and pick up this brick," Berry said.

The Vice Lords are a super gang and over the decades they have taken over smaller gangs like a big corporation buying out rivals. In the 1970s they made an apparent attempt to go legit, but by the 1980s most of the leadership from the 1970s was either dead or arrested for murder. Despite their claims, offering construction jobs has always taken a distant second place to offering assaulting, stealing, drug dealing, and scamming jobs.

Chicago mayor-for-life Richard Daley offered a bemused counterpoint to the Vice Lords and their press conference: 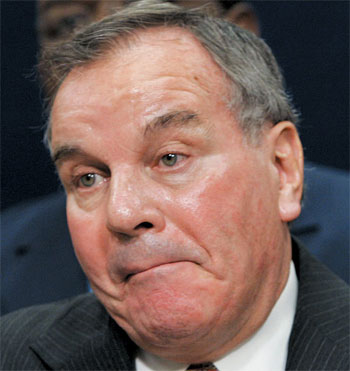 "Everybody complains about the police. But again, it's America. You can complain about anything."

Ha ha! What a card! Everyone is allowed to complain about the cops as long as you aren't being tortured for a confession.