What the Toilet Ghoulie From Ghoulies Can Teach Us About Tolerance 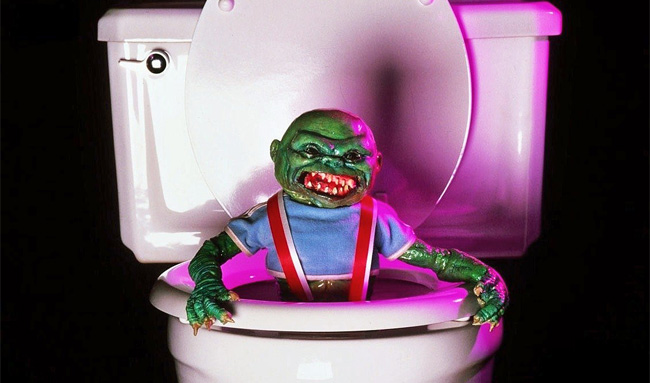 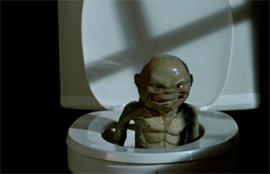 The year is 1985. The President is Ronald W. Reagan. Pabst is still being consumed without three layers of meta-irony. The problem is Ghoulies. Are Ghoulies? Is one ghoulie specifically.
The toilet ghoulie is a disgusting, green, slime-covered doll man with needle teeth rising up from a toilet. He looks like he's got no problem with chowing down on ass, balls, whatever business gets in his way. Nobody wants this little John goblin around. He's so unpopular that he isn't even in the movie Ghoulies.
Until he is.
You see, the film Ghoulies was in the can, so to speak, when Full Moon Entertainment's Charles Band had to come up with something for the cover. He dreamed up this ghoulie rising from a toilet and wearing suspenders. The one problem: none of that was in the movie. Sure, there were some little beasties in the movie, but nothing popping out of a toilet. But Full Moon loved the cover so much, they ordered re-shoots to include the toilet ghoulie. 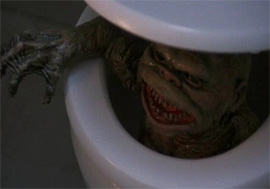 The immediate reaction to the toilet ghoulie on posters and box covers in the real world was revulsion. But that little guy stuck with us. We knew he could gnaw our gonads off and rake his little claw hands over our a-holes. That didn't matter. We couldn't stop thinking of him.
We got over our fears and misconceptions of toilet ghoulie. We chuckled when we saw him at the video store. Maybe we even picked up and rented a copy of Ghoulies to watch the scene where that dang toilet ghoulie popped up and ripped up an ass and balls.
It's called tolerance, people. Learn to tolerate what you fear. Like, say, a Muslim or, as another example, a slimy green ghoulie man rising out of a toilet to chomp on your goo bag. Tolerate him and you will come to see his truth. Behind the stereotypes and misconceptions is a character so endearing he went on to pop out of two more toilets on two more Ghoulies covers. 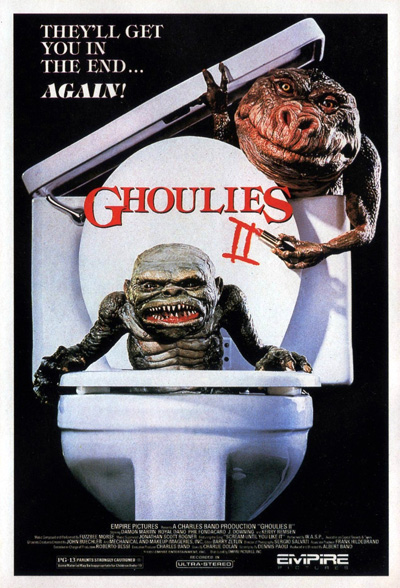 In the second cover he is joined by some sort of Dinosaurs-quality alligator beast living in a toilet tank. In the third cover he actually appears to be graduating from a toilet. 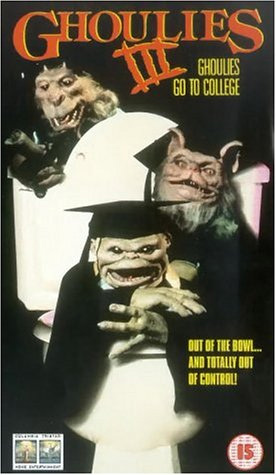 What is toilet ghoulie graduating to become? That's the great thing! He's in America now, he can be whatever he wants. A doctor, a lawyer, your child's teacher; we are no longer able to inflict our prejudices on him.
And if we manage to keep the bigotry at bay, ignore the fear that fuels it, everyone in America can be whatever they want. Even if they just want to shred ass and balls in peace.