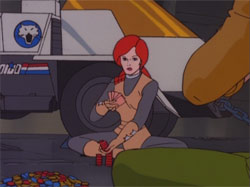 It's not like they have anything better to do.GI Joe is en route to Alaska in a gigantic and rarely-seen transport aircraft packed to the gills with half-tracked Snowcat vehicles and nameless GI Joe greenshirts. Gung-Ho, Scarlett, Duke, and Roadblock are hanging out playing poker and casually discussing the upcoming mission. You know, the mission where they fly in a transport aircraft with no armed escort into enemy territory with the intention of driving around looking for a cup in the frozen wastes of Alaska. It's not like the fate of three-quarters of a million people are hanging in the balance or anything.

Duke thinks Red October might be in league with Cobra, but Gung-Ho is holding four aces and he just wants everyone to hurry up and bet. The Special Ed Poker Tour is brought to a sudden stop by a laser blast punching through the skin of the transport aircraft. The Baroness, complete with dorky crash helmet, is leading a squadron of Rattlers in the attack on the undefended transport plane. Nah, don't bother those pilots at Elmendorf, they need to move their F-15s out of the state in accordance with the commands of Georgi Potemkin.

The Rattlers make quick work of the transport, despite the Joes improbably smashing the windows out of the plane with their rifle-butts and downing a few Cobra aircraft with small arms fire. The transport is hit badly and is forced into a crash landing in the snow. Ever the gentlewoman, the Baroness allows the Joes their miracle landing rather than strafing the crashed aircraft and finishing off the Joes once and for all. That's what we call opportunity cost in the business. The retarded business.

No one in GI Joe or Cobra ever finishes what they start. One guy with the spine to pull the trigger and kill people could gut both organizations in a day. 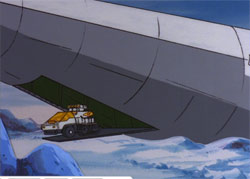 It's a good thing they crashed so pleasantly.Tomax and Xamot head out to deal with Red October, leaving the Baroness to cope with finding the real cup. It would be easier to simply destroy GI Joe and Red October and then quickly sell Alaskan resources to the highest bidder, but Cobra likes to do things the hard way. They love races and what could be more fun than a race to find a cup that may not exist in 500,000 square miles of frozen wilderness? Everything. Everything could be more fun than that.

Meanwhile, the Joes move out overland to track down the cup, heading in the direction of the last known location of the steam ship Romanov. This involves the strategically unsound move of driving their Snowcats single-file through a mountain pass. 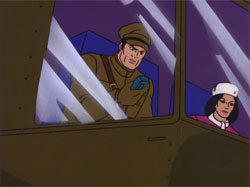 Sorry, ve had to kill your men to take over your country, ve are not evil.Red October, shadowing the Joes in helicopters, exploits the American stupidity and launches missiles into the valley to trigger an avalanche. Once the surviving Joes have extricated themselves from their ruined Snowcats, the leader of Red October offers his apology. "Red October is deeply sorry for inconvenience," explains the Red October leader, "but we cannot let you find Great Seal."

Yes, sorry about that inconvenience of fifty greenshirts getting smashed into paste under a million tons of rock and snow. Whoopsies, we're just doing our duty!

Without their Snowcats, the Joes are forced to hoof it on foot across some sort of bizarre Alaskan volcano hellscape that I am pretty sure never existed. Maybe it's just a metaphor for the hellish test the Joes have been subjected to in this episode.

What happens next? You will have to tune in Monday to find out, but you won't believe the twists and turns this battle is about to take. Oh, wait, I did mention the lost tribe of Russians in their ice city. Well, on Monday the truth will be revealed in The Great Alaskan Land Grab.