Time is the death knell for most Internet celebrities. More minutes means more opportunities for your "fans" to find reasons to hate you. I once posted on The Escapist forums that Yahtzee should review Eve Online next, hoping to paint him as a sell-out as huge Eve Online advertisements blanketed the whole goddamn web site.

Much to my chagrin, he ended up reviewing Eve Online, giving it a much deserved thrashing, which shut me right the fuck up. So much for my master plan for the downfall of some guy I've never met and has never wronged me personally and is actually contributing something funny and interesting to society. Still, I hate people like that.

The fact is, Yahtzee is a rare genius, an Internet celebrity that didn't get famous for baring his breasts or creating mind-numbing drama. Ben Croshaw is a talented, witty, and delightful fellow from down under, and that's what's so goddamn infuriating about him. You can't really find any valid reason to hate this guy no matter how hard you try. At least if he were female we could accuse her of being an attention whore or something. 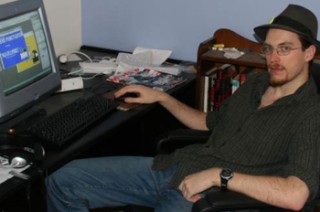 This is where Ben Croshaw jerks off.Yahtzee inspires those without employment or purpose in life to write essay-length diatribes about their favorite game that he just trashed. His lack of response only infuriates them more, prompting his haters to write even longer manifestos which usually include phrases such as, "Not as good as your past videos".

Instead of wasting his time posting on Internet forums and arguing with these people all day, he appears in person on panels with other almost-important video game people at conventions, which only increases his celebrity and credibility amongst his fans.

All this means is money in the bank for Yahtzee and his employers, who nobody has ever heard of before they signed him. Seriously, did anyone even know the Escapist existed before this guy started putting his videos on their web site? I still haven't read a single goddamn thing on there and I believe I would have a hard time finding anyone who has. I'm pretty sure Yahtzee has never read an article on The Escapist either.

I hope he got a good deal from those guys. Anything less than 95% of the profits would mean he got screwed. If they renamed the web site to "Yahtzee's Fuck All Videos" I don't think anyone would notice.

Something Awful attempted to court Yahtzee to get him to put his videos on our site, but $8 a video and two popsicles from the freezer wasn't quite what he was looking for. When he attempted to get us to sweeten the deal by asking for three popsicles and a fudgesicle, we knew we couldn't afford this monster talent. Fuck 'em. He's apparently not funny anymore anyway.

Not that it really matters at this point, because the people who declare their hatred for Yahtzee are just as, if not more important, than the people who love him. It's the Shock Jock Principle. In the movie Private Parts, the WNBC program director asks the ratings guy about Howard Stern's numbers. Turns out that the average Stern fan listened for an hour and twenty minutes a day.

The average Stern hater, on the other hand, listened for two and a half hours a day. Why? In both cases, the most common answer was, "I want to see what he'll say next." Yahtzee viewers want to see what game he'll trash next, though it wouldn't hurt if he put some whores in his videos.

Yahtzee haters contribute to Zero Punctuation's success in two ways. First, visiting their site to post why you hate Yahtzee and how the videos have gotten worse only provide The Escapist with more ad revenue nobody on that site but Yahtzee deserves. Second, declaring your hatred for the guy on any web site only makes his fans such as myself rush stupidly to his defense, cementing their devotion to their idol. By striking down the Internet celebrity, he becomes more powerful than you could ever imagine.

If you hate Yahtzee or any Internet celebrity because you're jealous, or stupid, or both, the best course of action to take is to simply ignore him. Don't click his links. Don't watch his videos. Don't buy his juice.

I, on the other hand, will continue to suppress my rage at the thought of Yahtzee's unbridled success and continue to enjoy his videos even if the new intro is awful and those things he puts in after the review is over are retarded.

Go ahead and archive that for your 20th, Google.