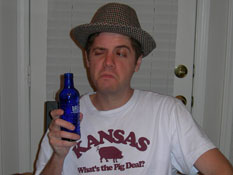 Once again, I've got a handful of Bawls HURRRRRRRR.THE DESCRIPTION: Bawls embraced popularity by catering to the slovenly, lonely individuals haunting LAN parties and professional gaming leagues, under the genius marketing idea that if you give a gamer something for free, they will unwittingly virally advertise your product to hundreds of other slovenly, lonely individuals in chatrooms across the universe. Nothing sells a product quite like a ringing endorsement from somebody with a name that references a character from "South Park," only with numbers instead of vowels. All you advertising companies should note this fact; if you really want to get word of your product out, go to QuakeCon and give away free black t-shirts with your item's name on it. Gamers will wear this shirt every day for the next 17 years, until their armpit stains have overrun every inch of remaining fabric and transformed the shirt into an evil sentient mass like the alien Spiderman suit from space.

Apparently Bawls has successfully conquered the lucrative gaming market, and has now decided to move into the mainstream, competing against hundreds of other identical energy drinks with significantly less stupid names. The secret weapon Bawls employs to deal with its enemies lies in their incredible bottle design, which resembles a blue glass marital aid for obese trailer park wives with chunks of dried makeup hanging off their haggard, sagging faces like cracked ceiling tiles. There are tiny little glass balls (get it? BAWLS - balls?!?) all over the base, perhaps to ensure better handling when you're all hyped up on caffeine and smashing your face into a CRT monitor while screaming, "OH MY GOD LAAAAAAAAG!!!"

THE TASTE: You know those terrible bottled malt beverages Bacardi and various companies are pumping out to capitalize on the trendy stupid asshole demographic Zima previously dominated? BAWLS GUARANA tastes exactly like one of those, Bacardi Silver I think, only without the alcohol. In case you've never tried Bacardi Silver before, it's essentially Sprite with alcohol, and BAWLS GUARANA is Bacardi Silver without alcohol. I guess I could've just written "it's Sprite," but that would've failed to convey its slightly bitter, rancid aftertaste which resembles sucking on a nickel that Kathy Bates squeezed out of her vagina. I'm not exactly sure how much GUARANA Mrs. Bates contains inside her vagina, but I'm guessing it's not significant. If you're really curious, I cordially invite you to strap on a mining helmet and cram your head into her to retrieve samples. Just make sure not to travel in too far west; initial reports indicate a hostile yeti with a garden hose dwelling in the area. He'll try to annoy you by flipping the light switch on and off and asking if you've seen his cellphone anywhere.

NOTABLE INGREDIENTS: Well there's the fabled GUARANA, in the form of "natural guarana flavor," which is basically saying a watermelon Ring Pop contains "natural watermelon flavor" because some kid trapped in charred wicker cage for 17 years was given one by a scientist and claimed, by golly, that propylene glycol tasted JUST LIKE what he remembers natural watermelon to resemble, at least before his eyesight was stolen from him by the Dark One. On a slightly more shocking note, the bottle reveals "this product contains high levels of Caffeine." No kidding?!? What a surprising development! In other related news: water supposedly contains high levels of water.

PROS: Taste is bland and inoffensive enough for general public consumption. Bottle did not explode in a shower of glass and deadly nippled shards when I stared at it for 30 minutes and adopted the facial expressions all Scanners seemed to use.
CONS: I wanted to drink a Sierra Mist after it, because it reminded me of Bacardi Silver, which reminded me of Sprite, which reminded me of how much better Sierra Mist is than all previous items. Also, "BAWLS GUARANA" sounds like the name of a secret prison the US Government operates in some remote area of Iraq, only with significantly less LAN parties.
RATING: 8 / 10 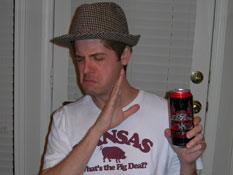 Sobe No Fear more like Dopple My Fingle.THE DESCRIPTION: The can itself is some black and red and silver mess of shitty futuristic fonts and clipart, as if somebody figured a way to perfectly translate a Flash website from 2001 into can-form. The high tech and awesome Sobe logo resembles two twitching lizards smelling each other's ass, which I must admit slightly distracts from the serious devil flames and hundreds of ellipses flying all over the bottle like a drunken short order cook throwing pancakes at a corrupt policeman. "Sobe No Fear" sounds like the name of a Japanese anime where the main character disembowels enemy demons with an enchanted tooth full of harpoons and fireballs.

The back of the can advises "THIS PRODUCT IS NOT INTENDED TO DIAGNOSE, TREAT, CURE OR PREVENT ANY DISEASE," which explains why I received no answer after I popped open the can and shouted into it, "MY TOE HURTS REALLY BAD, DO YOU THINK I HAVE CANCER, MAGIC CAN?" So if you have cancer, don't expect Sobe No Fear to help you out, because it's apparently too busy preventing an invasion of Earth by the phallus-handed creatures from Dimension Kill.

THE TASTE: Drinking the juice from a can of mandarin oranges which had six AA-batteries sitting in it for a month.

NOTABLE INGREDIENTS: Well there's taurine, creatine, and arginine. Those words are plastered across the top of the can in "COOLFONT 2000," so I guess they're a major selling point to somebody somewhere. Drinking one can of Sobe No Fear will give you 200% of your daily recommended dose of Folic Acid, which is apparently very useful to pregnant women. However, as mentioned before, don't expect the can to actually physically inform you if you're pregnant, as it's not intended to diagnose such a thing. I'm no scientist, but I think taurine protects your blood cells from transforming you into a bull, creatine is the crap powder GNC sells to people who want to "bulk up" and "die," and arginine helps remove ammonia from your body, which is very helpful if somebody hits you in the skull with a rock and suddenly you can't remember who you are or what happened.

PROS: The can looks like it was designed by a team of Californian street racers who spend all their time, money, and energy in the noble attempt to tell the world exactly how fast their Eclipse GS-T is through the lost art form of rear window decals. If drink cans were able to suddenly get up and start hauling ass around grocery stores, this would probably be the first one to build a neon purple spoiler from graham crackers and toothpicks
CONS: If you buy a can of this crap, you'll have to start wearing white tank tops and get a tribal tattoo, in addition to some white lettering on your rear car window which says something like "CASTAWAY" or "RENEGADE" or "LACTOSE TOLERANT" in that generic gangsta' font which resembles ye olde tyme lettering.
RATING: 3 / 10