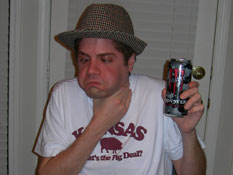 FUCK THE RIAA / MPAA / FDA / NCAA!THE DESCRIPTION: Oh man, MONSTER ENERGY ASSAULT will totally ROCK YOUR WORLD. You gonna get yo' dick blasted off by ginseng mortars, decimated by taurine tanks, and buried by B vitamins! L-Carnitine is gonna send you to straight hell where you'll burn for all eternity and wonder why you dared tangle with the obliterating firepower of MONSTER ENERGY ASSAULT! There is no god, there is only MONSTER ENERGY ASSAULT ROCKING YOUR ASS LIKE TWO HOOKERS AND AN EIGHTBALL, BITCH! The festive grey camouflage design makes it feel like, at any moment drinking this, a soldier will burst through your wall and garrote you. It's that kind of excitement and danger I live with every day as a webmaster and qualified person who drinks liquids and then writes about them on his computer.

THE TASTE: Orange Sweet-Tarts in a cup of mouthwash.

NOTABLE INGREDIENTS: Monster Energy said "FUCK YOU" to the face of the oppressive corn syrup establishment and went with the underdog, sucrose and glucose, for its alternative energy concoction. The "supplement facts" section lists various other healthy and energetic items such as sodium ascorbic acid (photograph developer solution), inositol (used to cut cocaine and crystal meth), and pyridoxine hydrochloride (helps balance hormones in women). If you're a real bitchy drug dealing woman who likes taking pictures, then this is the drink for you. It's a fairly niche market, I'd imagine.

PROS: The grey camouflage design might help the can blend in with its surroundings, thereby decreasing the probability somebody might accidentally purchase it. Also the coloring suggests the can is engaging in some sort of combat, so perhaps there are enemy energy drinks ready to open fire on them with a hail of glucuronolactone.
CONS: Tastes like dishwashing fluid. The loss of reputation and brain cells inherent to purchasing a soft drink that proclaims "VIVA LA REVOLUTION" on it, a phrase 50% Spanish, 50% English, and 100% bullshit, will ensure you'll never be able to obtain a job demanding more respect than the guy who unclogs the used condoms from septic tanks.
RATING: 2 / 10

Barf. If you'll excuse me, I now have to run my body through detox and consume 50 gallons of water to wash this crap out and rid my brain of the disgusting hazy headache energy drinks blanket on me. VIVA LA REVOLUTION DE WATER!!!