Rich "Lowtax" Kyanka always tells me "when all else fails, write about your pets." Well, all else has failed, despite the promise that my "creative side will shine forth with exceptional ideas." Thanks for nothing, fortune cookie jerk! I'm also aware that by writing about dogs today, I've not only hastened the site's inexorable transition into Something Dogful, but also placed my story in unflattering proximity with the latest masterpiece from a man who uses rawhide bones engraved with the slogan "I'm an artist, and dogs are my canvas" in lieu of business cards. 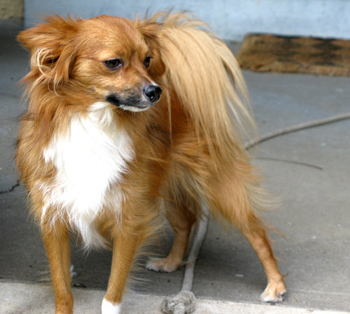 This is Griffey. Faithful Front Page News readers might recall that I already paid him homage in epic poem form. Unfortunately, this noble gesture failed to dissuade its subject from gnawing through my PlayStation cords like a common rodent, or from barking shrilly at some phantom intruder every day at 5 a.m., or from finding a way to delete this article by treading on the keyboard as soon as I take a bathroom break. He remains the subject of high-brow literary tribute, though, as I've last-named him Grendel, after a monster who was the bane of humanity.

I know people are wary about asshole-dog stories, given that they went to Marley & Me expecting emotional uplift and Beethoven-caliber slapstick and left sobbing uncontrollably because how, how could God be so cruel? Spoiler alert: Griffey doesn't die at the end of this update. He's only two years old, though that's of course 14 in people years, and probably like 28 in chihuahua-mix years. Like human midgets, small dogs have a shorter lifespan.

Griffey looks like a miniature fox, with the exception of the googly fish eyes that betray his chihuahua heritage. His doofy-looking adorability and natural charm make it (barely) possible to tolerate his neediness, constant fuck-ups and clueless retardation. I imagine this is what it must be like to have children, or to be someone dating me.

Not that I'll ever actually have children, because Griffey's antics make it physically impossible. Yes, my dog has sabotaged my love life, which didn't need or appreciate the push toward complete obsolescence. His tactics include using himself as a furry buffer zone between myself and my girlfriend whenever we lie down, and treating any display of affection as a cue to slather everyone in sight with sloppy licks until any trace of romance drowns in dog saliva.

Griffey clearly aims to destroy the very family that took him in, like that House That Rocks The Cradle babysitter. I'm sure he spends his days emptying my inhalers, so I'll find them empty at my direst moment of asthmatic need and suffer an indignant nerdy death. And I'm starting to fear for the safety of my recently hired gardener Ernie Hudson.

Anyway, while Griffey disapproves of any human amorousness, he has no objection to mounting his housemate Bam. But Bam is much larger, so his efforts consist of placing his paws on Bam's back and wavering unsteadily. He looks like a stilt-walker trying to wash an elephant's ass. Ineffectual as this is, Bam seems to get the point, because he's usually inspired to start humping my leg, thus making me a non-consenting participant in a big gay dog conga. 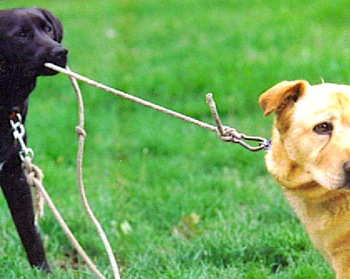 Bam (left) tugs the leash of Yogi, who died -- many years later, of old age, not a leash-tugging incident.

Other than Bam, Griffey doesn't acknowledge other dogs, mostly because he doesn't seem to realize that he is one. This isn't a cute "he thinks he's people" situation, like when dogs lie on a pillow, or play the piano, or set a lethal trap. It's more like he thinks he's a rabbit, or a squirrel, or a squeaky toy, or other canine prey. Griffey is not only terrified of other dogs, but also people, and paper sacks, and plastic sacks, and his food bowl, and his reflection in the mirror. On the other hand, he'd blithely walk in front of any fast-moving vehicle if he weren't tethered by a leash. Basically, he makes a huge fucking deal about harmless shit, and remains oblivious to real threats. My dog is television news.

Despite being skittish, destructive, obnoxious and rude, Griffey unwittingly does a lot of good things. For example, when he's not actively ruining my relationship, Griffey helps salvage it. On those days after a few years of coupledom when it feels like there's nothing left to say, colorful anecdotes such as "The dog ate his own puke today" really help break the silence. Also, he makes an amusing jester, thanks to tricks such as "the tongue button" (tapping his nose lightly prompts his tongue to unfurl, making him look like an exotic bubble-tape dispenser) and his inexplicable ability to respond to the command "relax" by striking a casual pose, his front legs bent and resting like elbows on a dinner table. Most importantly, Griffey makes for good writing fodder on those nights when the other ideas (GooglePants! Black Metal Wedding! Take a bunch of Ambien and write down what happens!) just aren't working.