How Will Children Understand WWII Without America's Hitler Statues? 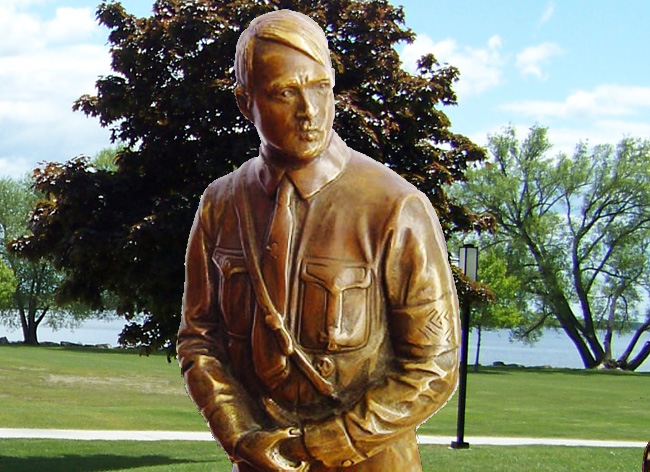 Without America's many statues honoring Hitler, the next generation will have little understanding of the history of the Second World War. Many voices, including my own, warned about this possibility earlier in the year, but we were shouted down by Americans who said it was time we tear down the giant Hitler statues placed in our parks, town squares, and outside various government buildings. They demanded we stop "celebrating" history's greatest tyrant. That we rename Hitler Park, Hitler High School, and Hitler Memorial Hospital to "less offensive" things.

The most offensive thing to me is the erasure of history. While people were cheering and hitting Hitlers with their shoes, I was holding my face in my hands and shaking my head at the same time. Toppling those bronze Führers is no different than the Taliban smashing up a Buddha or ISIS using dynamite to blow up something. I can't remember what it was they blew up because the statues no longer exist. Soon, I won't be able to remember Hitler. Even the image of the toppled statues will begin to fade, unless we make a statue of that, leaving behind my knowledge of American history, mathematics, and science gleaned from statues in parks.

Even the cemetery Hitlers are coming down. 400,000 Americans gave their lives in the Second World War and it is important that we honor their sacrifice by remembering Hitler.

I have heard some people suggesting that once we finish tearing down the Hitlers, this madness of revisionism will stop. That we will no longer be tearing up our history books and people will be satisfied with the lack of Hitlers. But I ask, if we didn't stop with Hitler, why would we leave the statues of Emperor Hirohito and Benito Mussolini standing? It's just a matter of time until we begin to tear them down as well and the entirety of the Axis involvement in World War II begins to fade from our collective memory like reverse Polaroid photographs. Those are a thing few people remember because there are no statues to Polaroid photographs.

If we tear down all monuments to the Axis, then what have we done? We will only remember Allied involvement in World War II and our confused children will believe that the Allies were fighting each other. Patton vs. Montgomery doesn't seem so fun when you realize it won't be the premise of a nine volume series of novels, but instead what our kids will believe when they graduate High School.

And what about purely American history? Tyrannicus the Cannibal statues used to dot our cities. I went to Tyrannicus High School! But in the 1990s there was a movement to tear down all the statues honoring the so-called "Unholy Blood Eater" who wore a pelt of "womanflesh" and terrorized America for much of the late 19th century. Some people thought it was weird that we had statues devoted to a killer who once turned babies into boots. They thought it was "messed up" that libraries and post offices were named after him.

So the statues came down and history was erased. Now who remembers Tyrannicus? Nobody. It makes you wonder what other statues have been removed from our cities. What did our old parks and military bases used to be called?

You can find out in my new ebook Statue of Limitations: The Statues THEY Don't Want You to Know About, in which I blow the bronze lid off all the statues the globalists have torn down over the years. I have a whole chapter where I list the names of people that used to have statues in America and now don't. Remember Joe Paterno? No, of course you don't. Scott Peterson? No more bronze to that guy. Lee Harvey Oswald? You might be surprised to learn the President JFK did not shoot himself.

Someday, hopefully soon, the fever of destroying our proud history will break and we can restore some of these powerful reminders to our cities and towns.