When you lie a path looms ahead. On that path is the lie and to either side are the brambles of the truth. To continue forward you must never stray from the path or you will fall into the brambles and tear open your tender flesh. 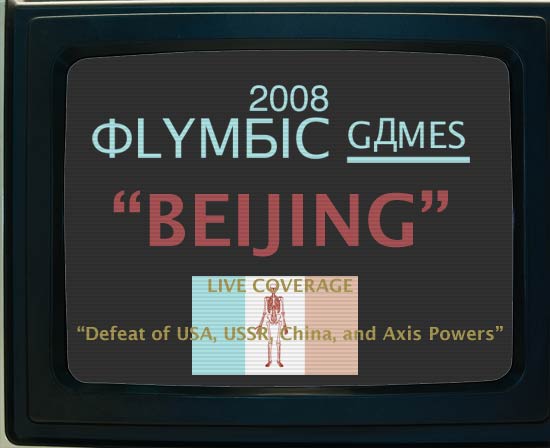 The Citizen's Sport & Health Broadcast Channel. The Second Channel. They beam their signal to us over the teleopticon. The action is about to begin. At the sound of the Hero's Carillon our athletes will arrive in Beijing on the Silver Condor float plane. Imperial Island is sending 29 athletes to the Olymbics. This is the most of any nation. We are expected to win the most medals against our rivals USA and USSR and Axis Power.

The float plane is now pulling into Beijing Harbor. It is beautiful. I want to cry. The water is sparkling on its polished silver hull. The scarlet skeleton flag flies as the Beijing army lines up to greet our athletes. They wear broad-brimmed hats and wraparound sunglasses. They look like USA peasants compared to our glorious athletes. 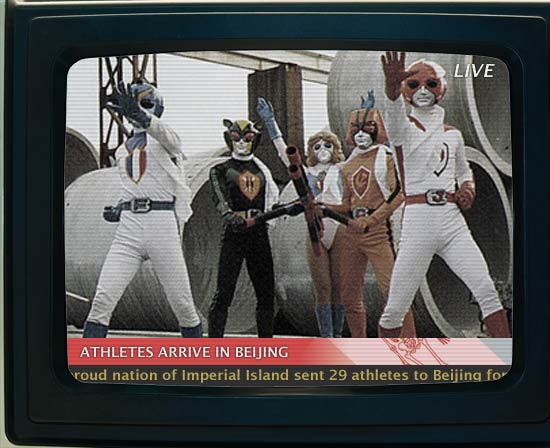 Fireworks are going off. The Chinese honor us. Judges declare it is the best arrival. A perfect 10. One judge weeps, another bites his palm to keep from fainting.

Gold medal: Imperial Island for glorious silver float plane.
Silver medal: USSR for a regular plane that can changes colors.
Bronze medal: Chinese for an elevator made out of glass.

Congratulations to vanquished rivals for placing in the match. The Second Chanel activates its camera in the Olymbic Village. In the Roosting Area of Olymbic Castle Imperial Island Snake Falcons are nesting and preparing for 250 meter snake catch. The Trial of the Snake was invented by Imperial Island thousands of years ago to tell whether or not a bad trader is lying about his wheat. Today we will unveil the lies of bad trader USA. 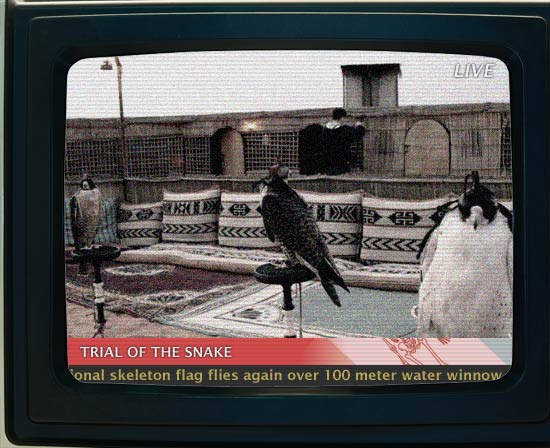 Victory is sure to belong to us on this day. Our falcons are in top condition in the world and the snakes are unusually liarous wretches.