The Mysteries of Indiana

Welcome to part one in our exciting one part series detailing famous Mid-Western States of America. I consider myself to be a State enthusiast, and while I am not licensed as such, the volume of amateur in-the-field experience I have logged qualifies me as a State expert. During my frequent travels between Illinois and Ohio, both excellent and exciting Mid-Western States, I encountered a mysterious and perilous State whose name is whispered in the darkest tales of American folklore. That State is known to most as "Indiana".

Based on my adventures in Indiana's forbidden lands I have pieced together what I hope is an accurate snapshot of this great Mid-Western State.

Indiana: A Land of Enchanted Excitement

This rough map depicts Indiana and bordering States Illinois and Ohio.Population: Over 50,000 white people. This is a rough head count based on a mathematical formula I developed. Basically every square mile of Indiana contains an Applebee's and the average Applebee's contains 20 white people including customers and staff. From there I just wrote down the number 50,000 and then drew a cool spiral.

Geographic Area: Indiana is the widest State in the Union, extending for what seems like thousands of miles between the borders of Illinois and Ohio. Without any genuine surveying equipment I just made what we in the industry like to call a "guesstimistake".

Economy: Indiana's economy is primarily based on the retail of fireworks, with secondary economic sectors encompassing the State's massive discount cigarette and motor sport's memorabilia industries. Based on some rough calculations I made while shopping in a plaza that contained two fireworks outlets, a NASCAR memorabilia store, and a discount cigarette shop that sold NASCAR fireworks, Indiana is essentially one giant firework. A stray spark will cause the entire State to fly about 500 feet into the air and explode into a brilliant cascade of sparks that also might cause an extinction level event. 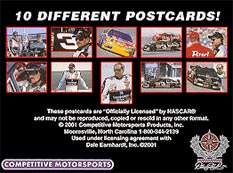 Holy shit! 10 DIFFERENT MOTHERFUCKING POSTCARDS!Major Cities: Indianapolis is the mysterious capitol of Indiana. Its streets are said to be paved with gold #3 Dale Earnhardt license plate brackets and its rivers run solid with a tumbling torrent of discounted and off-brand cigarette butts. Lured by this supposed over-abundance of riches, many explorers have ventured into Indianapolis never to be heard from again. Indiana's main stop for travelers is the thriving metropolis of Fort Wayne. In addition to offering several rest stops and computerized candy vending robots for the weary journeyman, Fort Wayne is the world's leading manufacturer of right wing radio show hosts and anti-abortion billboards.

Political System: Indiana is a constitutional monarchy, ruled over by the Earnhardt family who in turn leave the majority of the State's government in the capable hands of the two houses of parliament. The House of Commons is elected to office by the citizenry while the House of Legends consists entirely of NASCAR drivers who have achieved 2:1 win ratios in 30 or more races.

Popular Culture: The majority of Indiana's popular culture can find its roots in the State's two biggest industries of racing and fireworks retail. Natives of Indiana are huge fans of cars driving at high speeds and explosions and also cars that drive at high speeds and then explode. Indiana is not immune to trends that sweep the whole of the United States. However, the Indiana government's long-standing policy of isolationism insulates the State from those trends. This means that Indiana is roughly 20 years behind the cultural curve. You can expect to see parachute pants, impromptu break dancing, and white kids in red leather jackets with 500 pockets and a single sequin-encrusted glove.

Regional Celebrities: The phrase "the spotlight starts in Indiana" is often spoken in this State, but rarely outside of it, since other than a few NASCAR luminaries nothing particularly famous has come out of Indiana since the Polio outbreak of 1905. Within the State though, names such as Mudhuck and Bolt Helmetface are spoken nearly as much, if not more, than definite articles. Mudhuck is a four-hundred pound blind and dumb 12 year-old who communicates by throwing sacks full of rocks off of a hill and onto passerby. He is currently working on a novel entitled "DDDFGEWSXSS" by throwing sacks of rocks that his mother has painted letters on and his award-winning first novel "FDFGGGGG!FD" was composed in a similar manner. Bolt Helmetface is an Indianapolis native famed for his ability to sprint face-first into various objects. In 1996 he ran into 170 brick walls in a single day, securing the world record for number of objects collided face-first into during a 24 hour period. Other celebrities of less importance include "that guy who dug a lot of holes", "the woman who drank a lot of milk on public access and then threw up like in Jackass", and "that little kid who can make his eyes bug out". Rumor is that some Internet jerk named "Livestock" also lives there, but he doesn't count because he's on the Internet.

Visitors to Indiana are greeted with a gentle pitch by a handful of retailers to "stop on by" and check out their fireworks selection.Landmarks: Admittedly I did not explore the entire vast expanse of Indiana, but I put an effort into taking in as many of the historic sights as possible so as to inform you, our reading public. Unfortunately, all of the landmarks I could find dealt with either cheap cigarettes or fireworks. Did you know that there is a store along Route 30 in Indiana that sells bottle rockets that look exactly like Marlboro Reds? They're reasonably priced as well!

Fine Dining: Indiana was first colonized by prospectors from the Southern United States, giving the cuisine a distinctive southern feel. The State is heavily saturated with steak houses and "Texas grills" of all description, but as of late Applebee's is apparently giving these local establishments a run for their money. As mentioned previously there is approximately one Applebee's restaurant for every 20 inhabitants of Indiana. Roadside produce stands might at first seem a big business to the unwary traveler, but don't be lured out of your automobile! You will be swarmed with people selling fireworks and packages of "Smokes-a-lot Save-R" brand cigarettes out of the back of a pickup.