Why you love it now: Score another one for the "indie game developers can do no wrong" crowd, though I never imagined in a million years that a couple of guys would be able to finance a series of games off a damn web comic. If I weren't so full of irrational hatred I'd be pretty damn impressed. 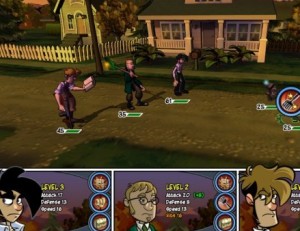 Penny Arcade is making a game? Well that sounds kind of dum- YOU MEAN IT'S AN RPG?! Count me the hell in!Expecting a backlash against the gruesome twosome's video game debut I was shocked to find that Penny Arcade's game was, gasp, well-received by goons.

And then I realized it has RPG elements. Well there you go.

What you forgot to hate: The fact that these guys achieved an incredible amount of success and your comic about dudes with 'tudes who play video games and are occasionally reprimanded by a stereotypical female character who is always complaining about her period and the hands are never in proportion to the rest of the characters' bodies never got off the ground.

Can you imagine what the Internet would be like without petty feuds? It'd be a place to communicate with people who are different than you. It'd be a place to learn new things, enrich your life and the lives of others, and help make the world a better place. An Internet without drama and the web sites devoted to cataloging that drama? I can't imagine such an Internet.

So when a couple of otherwise okay guys attempt to make a couple of bucks through a collaborative vision, hard work and determination, just say no. We don't tolerate that sort of bullshit around here.

Why you love it now: DocEvil and Lowtax signed up for Twitter.

What you forgot to hate: Just because you submit yourself to the glorious Something Awful hive mind doesn't mean you have to do everything we do. Jesus.

Anyway, Twitter continues to become more popular than anything in the free world as days go by. The site allows users to send and receive text messages from friends and family about any old thing. It isn't exactly new technology but it's the ease at which messages can be sent and recieved.

Well what do you know, access to a seemingly endless supply of images of breasts does get boring.From your profile you can type in a short message about what you're currently up to. Those who "follow" you receive the message on their phone. Conversely, you may receive a message like, "Just got out of the shower, soaking wet, looking to get fucked tonight -Mom".

With the ability to send and receive messages to and from your friends about every little thing you are doing, it only leads me to one question, WHAT THE FUCK DO YOU ACTUALLY TALK ABOUT WHEN YOU MEET UP WITH THOSE PEOPLE?

"Oh hey! I was just at the store and you won't believe who I saw!"

One of the benefits of leaving the house to go do something is being able to come back and tell someone everything you did. Usually that person doesn't care, so why would they want to sign up to receive real-time status reports about you? And yet they do.

It appears that communication is an activity that's best avoided unless it can be done in bite-sized nuggets and as inane as possible. Twitter makes it easy to transmit any superfluous thought you may have such as "Do you think John Ritter is boring God in heaven right now?", otherwise these thoughts would just stay in your head. And who would want that?

So no, having a Twitter account is not okay. Unless you're being ironic. Then by all means join in!

Are you back with us now? We thought we lost you there for a few months. Now that you're sufficiently retrained in the art of hating everything we hate (well, the three examples I could think of anyway), the healing process can begin.