Johnston Emergency Check In: MY SIDE OF THE STOLEN VIRGINITY FIAMSCO 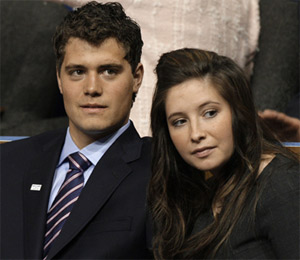 Yeah here I am pictured rape-gazing her into marrying me with the rape guilt and not like caught up in a BS storm of stupid shit from this whole goddamn family like wolverine is trapped in the danger room and the power level keeps going up and up and beast was tinkering with the safety limits and accidentally turned them off. Also this was back before Bristol's face looked like somebody tried to install hydraulics and flatscreens in it.So while she was getting herself woozy charmed or whatever I was devil scheming to make my moves on her back in the tent and take her virginity and ruin her morals and future and everything else it's all my fault. Yeah, right, okay. Maybe I was thinking about nailing it, but that's not what happened. But let's get her side first.

Bristol awakens in her tent, with no recollection of the night before. She looks over and sees Levi's empty sleeping bag right beside hers, and hears Levi and his friends "outside the tent laughing." (Pg. 3) Bristol quickly texts her friend to get over to the tent, and she immediately pops over and tells her, "You definitely had sex with Levi." (Pg. 4) Despite being brought up in a Christian household determined to save herself until marriage, Bristol laments the fact that her virginity had been "stolen," and as she surveys the evidence in the tent, soon realizes that "all of my plans, my promises, and my moral standards had disappeared in one awful night in a series of bad decisions." Bristol also regrets that Levi wasn't even there to comfort her, and instead of waking up in his arms-like they do in the movies-she came to "in a cold tent alone as he talked with his friends on the other side of the canvas." (Pg. 5) Bristol soon reaches the inevitable conclusion: "I was going to marry Levi. I had to now."

Huh, she was forced to marry me because I date raped her in a tent and then was laughing with Bodie about how we taped Wolf 60 feet up a pine tree with a keystone box on his head. I seem to remember we were forced to marry each other by Mrs. Palin threatening to have the highway patrol burn down by mom's house and shoot bristol's horse Liberty which is a fucking retard horse anyway and can't run for shit but whatever she loves that stupid thing and combs the shit out of its hair. So we got married because her mom was like "you put fucking crazy babies in my girl and now I am gonna be president you make her an honest woman levi!" 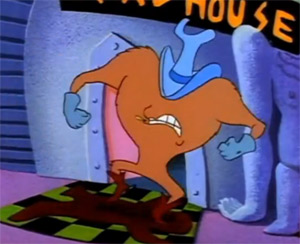 I swear to fuck this is what Doris looked like only her cowboy hat was purple and instead of gloves she had like these sausage mitts.On the subject of the actual act of doing things with bristol I want to see a DNA kit or something if Bristol can fucking afford to pay for it herself because I barely hit a grounder on her drunk ass that night let alone round the bases. She was puking on a raccoon and threw my phone off a cliff and tried to fight Bodie's girlfriend Doris who has got to weigh like 400 pounds and looks like she works out nothing but this huge mound between her shoulders. You remember that guy with the horns in the beetlejuice cartoon? I might have been high but I remember some super pissed hairy thing that was like a mouth and a cowboy hat and two fists. That's what she looked like and Bristol said she was coming onto me and tried to hit her with her car keys.

I ended up sleeping by the fire because bristol was covered in wine coolers and combos looking like somebody played a ten hour game of paintball in the tent. Some animals went in and out, I think a brown bear might have spent an hour in there licking her face, but even they don't deserve no accusations of untowardness.

Truth is if she busted any membranes or what have you I'm pretty sure it might have happened when she called Doris Shrek 4D and then kept calling her 4D all night and finally Doris snapped and got a running start and punted Bristol right in the clamato. You want to talk to me about busting nuts I will fess up to 9 out of 10 of those and the 1 I ain't stenciling on the side of the unit is because of pending involvements with possible dudes who own shotguns. Honestly, I ain't even above date rapes, seeing as how the definitition is so broad I'm pretty sure I've done like a triple apocalypse of date rapes on the 2009 graduating class of wasilla high.

And you can get the whole story and counterpoints and the story about the time I got into a fight with David Bowie at the BAFTAs and I didn't even know what either of those fucking things is but I'm pretty sure I might have ended up being date raped myself. WHICH IS NO LAUGHING MATTER, BRISTOL.

I hope this settles the issue. Thank you for your time you fuckers.