This was a world that never quite fit me. I was unnaturally hungry and never found something that could satisfy that hunger. No job kept me. From desks to barns to the muffling din of factories, the concept of a profession was foreign. No drug quieted me for more than a few hours. No friend or lover ever lasted for more than a few days. My family had long since receded into the gray haze of memories.

The job at the all night tailor's had seemed to be another mile marker on my aimless journey. I was wandering the quiet slum of a city of little importance when I happened upon the sign - Help Wanted - leaned behind the yellowing window beside a faceless mannequin in a pin-striped suit. The all night tailor's was one of a number of businesses in this forlorn district that seemed almost shuttered. Sun worn wares long-forgotten behind smoke-tinted glass. Prices kept the same for decades. 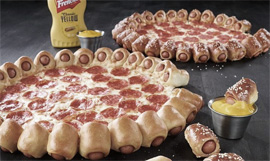 The old man hired me with very few questions. He showed me how to mend and modify and disappeared through the door to the upstairs where he slept as much as possible. I could have taken everything in the shop of value that first night. It was as if he sensed that I had nowhere to go with it and no reason left to steal. I dutifully manned the counter, because I could not answer the simple question of "why not?"

There were no customers that first night, nor the second, but on the third I became acquainted with one of our few regulars. He was an immensely fat man with a face swallowed up by rolls and wrinkles. He spoke in simple, clear phrases. "Take in," he said to me.

Despite his bulk, he wore an over-sized burgundy suit and vest. I imagined it growing ever larger on him like hair until it required a trim. His body gave off an unpleasant yeast smell. He giggled when I took measurements. I made the alterations with him still wearing the suit. When I was finished, I held up a mirror for him. The wrinkles moved on his face as he regarded his reflection.

He told me in a high, almost baby like voice, "Thank you."

Though there were a few other customers, was the baby man who visited me the most. He always came in a dark sedan that shut off the lights before it had stopped moving. There was a driver to the car who never got out and remained anonymous behind tinted windows. Despite his gentle manner, I did not like the baby man. His size was a menace. 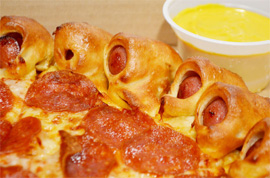 It was on the fifth visit that he handed me the glossy card. An address was printed. A price. And an advertisement for something that I could not quite believe. A wheel of meat and bread and cheese studded with teeth of more meat.

"You come try," he said to me and walked out of the all night tailor's.

The buses did not travel to that part of town. I borrowed a bicycle from the old man and rode it through the city. Past parks and ice cream shops and families that lived in willful ignorance of the sort of ghostly slum where I made my home. Their happiness was unnerving. Their shiny new automobiles served as reminders that the world moved on without me. I was glad to escape them and make my way into a windowless industrial area of the city.

Sodium lights blazed from iron pipes big enough for men to stand within them. Storage cylinders and chugging stacks and high fences topped with barbed wire hemmed in the the streets. There were no sidewalks and no trucks or cars at that late hour. Moths twirled beneath streetlights, their shadows flickered over my face.

Down in the musk of a refinery, where even on a dry night the gutters sang with effluent, I found what I had come to find. Among the rust, the Pizza Hut. It seemed all windows and its light spilled across a desolate blacktop. A single figure stood with his back turned to the counter and his face to a kitchen no more or less dirty than a spoon found in an alleyway. He did not turn to face me. There was a certain pubescent bristle to his cheeks, a redness as though a ring of acne surrounded his face, but he would not turn to show me the extent of his disfigurement.

He did not respond, save to emit a certain wheezing inhalation and exhalation. I noticed a blurry reflection of his features in the surface of a counter top. His face was red and bubbled. Or was it? His visor dripped with gore. Or did it?

The more my unease grew, the more I became convinced that this was the place and this was the pizza I needed to finally satisfy my hunger. All along, I had needed this pizza. I trembled and blurted out, "The manager!"

The teenage employee slowly lifted an arm and pointed a finger at an unmarked door behind the counter. There was a loud click and something rumbled deep within the Pizza Hut, as though a tomb had been unsealed. The door swung open and I knew I was meant to go through it. I had to go through it. I felt closer than ever to some ill-defined truth.