GSElevator's How to Trap, Kill, and Eat a Goldman Sachs Banker

Hungry people not working in finance have written me to ask how they can lure Goldman Sachs bankers out of their buildings in Manhattan and kill and eat them for food. I confess, I haven't given much thought to what people other than fund managers and investment bankers were doing other than blowing me in Bentleys. If you're hungry, get the government to buy you a radish or something. What is less than 15% of my income doing if it's not buying you radishes?

Then I ran out of things to write around the time I wrote those Goldman Sachs fashion tips for Business Insider, so why not? 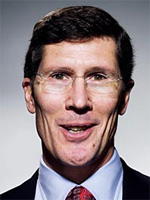 Killing and eating humans has a rich history, not just among lost mountain expeditions, but also among financial managers.

They say that when BOA bought Merrill Lynch in 2008 they gutted the company, but Kenneth Lewis at BOA took that literally, slicing open Merrill CEO John Thain and having a bite of his heart. It wasn't much to look at, just a little black thumb that twitched. There's a picture of that in the BOA Christmas card from 2009.

Oh, don't worry, Thain is still alive. There's a whole town in China that provides replacement hearts for Wall Street. Not to mention, there are laws to prevent CEOs from dying. For about half a day Thain was walking around Lewis's yacht, Mischievous Mammon, cut open from tie to taint. Scared the hell out of Lloyd Blankfein's Brazilian bikini models doing limbo by the outdoor fireplace. Thain is fine now, or as fine as anyone can be slumming it over at CIT group. He doesn't even have his own elevator anymore.

Executives are rarely on the receiving end of cannibalism. It is usually the other way around. Ever wondered what happened to all the homeless people in Manhattan during the Giuliani and then Bloomberg administrations? There's a back room at JP Morgan where the sausage is made. It's served in the cafeteria as gumbo. Not bad if you have the stomach for anything other than Kobe steaks and cocaine. Which I don't.

But maybe you want to eat an executive from Goldman Sachs. Before you can sink your teeth into the rarest meat the 1% has to offer, you're going to have to trap and kill one. 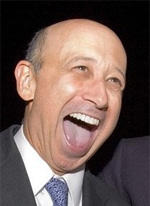 If you want to trap a Goldman Sachs executive you need to know what they like. Hermes ties, pink cocaine, laughing at their investment clients, offering Hollywood c-listers enough money to turn them into prostitutes for a night. It would make you sick to know what Lance Henriksen will do for $650,000. Everyone has a taste for something.

When Ben Bernanke was CEO at Goldman he liked "pizza Kiev" which was hiring an Eastern European prostitute, having her eat a full room service spread at the Four Seasons, and then jacking off under a glass coffee table while she pukes it all up onto the top. Blankfein is comparatively low maintenance. On a good day he just likes a big butt. On a bad day he buys a kid and throws them off a roof.

Free box seats at the Garden will usually do the trick of luring out someone from Goldman. Throw in somebody interesting like Rand Paul or Stoya and you're sure to get them to show up.

If that doesn't work, send them a couriered envelope that contains an invitation to a secret society. Give it a really good name like The Omnipotent Brotherhood of the Green, Lords of Building 7, or Bone Bros. Maybe include a symbol of a shield with a skull and a key on it or something. If you don't belong to at least two secret societies at Goldman you are a triple C junk scrub. The more you belong to, and the more obscure, the better.

Alternately, you can just go to where they live. Look for the most expensive, ugly, bullshit Park Avenue penthouses you can find on Zillow and dress as the special white-glove UPS guy that delivers rich people's packages.

There might be a whole scene with the wife and kids, hiding in the panic room, screaming while you tape up dad or drag him out by a meat hook, but don't worry. Guaranteed those kids are going to grow up to be stone-faced psychopaths whether or not you murder their father in front of them. They're ultra rich. They're like the aliens in Contact that turned into Jodie Foster's dad to even be able to talk to her. Everybody outside of their class is just an ant waiting for a magnifying glass.