The SA Vs Fark Photoshop Battle

It simply is not possible to go through life without making both friends and enemies, unless you were say some sort of emotionless robot or possibly a wooden block, but even then I think you might rub someone the wrong way. The Internet, being sort of like the retarded cousin of life, is very similar. You cannot run a "major" and "successful" web site like Something Awful without finding amazing pals and dark and timeless villains in the other web masters in your particular genre. This brings me to FARK. Those filthy curs at FARK and their worthless brain-dead readership DARE to question Something Awful's rightful position as the ULTIMATE PHOTOSHOP POWER HOUSE. 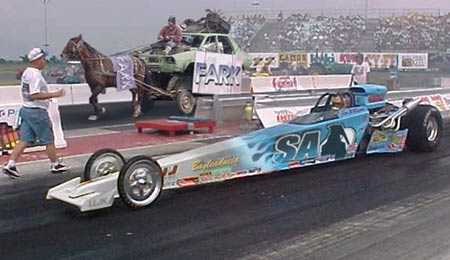 "Oh, but Zack," you no doubt say, "don't make such mean comments about FARK because their readers will see this and be hurt inside."

First of all their readers are all morons and couldn't Photoshop a big red circle onto a picture of the president if they had ten men working in shifts. Assuming they even possess the ability to read anything but the icons for porn sites, this article does not have a BOOBIES tag from FARK attached to it, so they won't even bother. We can take that assumption even further and say that they could emerge from their febrile jackoff parties in their mom's basement long enough to find a friend who can read and get them to recite this article out loud. Even then, they wouldn't care, because they would be too busy laughing at a picture of a fish that someone Photoshopped an ass onto.

Despite my obvious disdain for their ilk, I am throwing down the gauntlet and announcing the First Annual/Monthly/Bicentennial SA Vs FARK Photoshop Battle. FARK might as well give up now, might as well just surrender by not participating, because I know our readers and Forum users are going to obliterate them like a cup of noodles at Hiroshima ground zero. Here's how it's going to work Something Awful fans and probation officers of FARK readers who just happen to wander past this screen during a child pornography bust on their basement apartments.

You read the topic, I know it will be hard for the FARK readers but I didn't say that Something Awful wouldn't have an inherent edge, and submit an entry based on the topic to either FARK, a related thread in the SA Forums, or to me via e-mail.

Your image cannot exceed 800 X 600 in resolution and cannot be larger than 100k in file size. You can only submit original work. You may submit as many entries as you wish but please do not repeatedly submit refinements on a single entry.

No pornography. No racism. No pictures of my mom naked, even if they're tasteful nudes. Please, just, no.

Entries will be accepted from January 21st through January 25th (entries must be submitted before midnight on Friday the 25th).

The weekend of the 26th, Something Awful and FARK will each select the ten best user-submitted pieces from our respective readers. We will compile these twenty selections into an archive and submit them to AMAZING CELEBRITY WIL WHEATON. No, your eyes aren't going crazy with joy, THE Wil Wheaton will be judging the final entries, so set phasers to "talented Photoshopping".

If the judging proceeds as planned then the Winner (FARK or Something Awful) and the scores assigned to the finalists will be posted here on February 4th.

For FARK readers: SEND PICTURE IT MAKE WINS AND YOU CAN HAVE PRIZE.

The Prize is a month of banner ad space on BOTH Something Awful and FARK. Wow, nearly worthless Internet advertising FOR FREE.

The Amazing Topic: TV Shows That Would Never Be Made

Which reminds me, I would like to thank special celebrity judge Wil Wheaton for taking the time from his busy schedule of crying in the corner of his apartment about how people in Vulcan ears don't even want him to sign stuff at Star Trek conventions. It really means a lot to me that the kid who got a leech on his balls in "Stand By Me" like thirty years ago still has the youthful enthusiasm to play the sidelines on upcoming trends. Thanks Wil, you're the best! How are those Hollywood hand jobs working out for you? At least you can still act when you pretend to enjoy fellating a 50 year old gaffer from "Who's the Boss?" 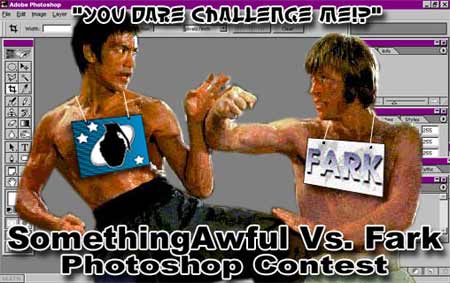 So come one, come all, and submit your entries to win prizes so fabulous you may literally crap your pants, especially if you're a FARK reader, but wallowing in your own filth is nothing new then. Thanks "The Yellow Yell" and "None More Negative" from the SA Forums for showing off just how doomed Fark really is.