we're off, off, off, off, off broadway with this shit nigga. I'm talkin lampsoke, I'm talkin inmate theatrics. It's showtime with your number one reviewin nigga from the big sweat danglin down south, where the bikinis get wore out by the real things and houses made out of cocaine. It's moneymaker don johnson yall!

So to begin this niggas have been hyping this shit for like 100 rotations and I was about sick of this shit before it even took up on the stage. So my expectorations was low at a minimium. It should only go up from here is all I'm sayin.

Seems to me from all evidence there was some sort of fundamental type of misunderstanin what constitutes a Christmas Pageant. You got that bald ass white boy Randy Curdo in charge of the ninjaturtles up in X Block come down to H Block like a talent scout and hook it up with Jesus Beast. Now normally I aint got no time standin on superstition and prayin and shit, you gotta make your own miracles is all I mean, but Jesus Beast come around you better say your prayers nigga. Let the Lord hear you testify, because Jesus Beast got hands like bear paws and he gonna teach you to get christ in you real fast, especially if he come up behind you in the shower.

Ain't nobody like a brutalizer, especially one convert your religion, but Jesus Beast got to have some respect for flyin solo. Until he gone turn coat and hook up with Randy Curdo. Get himself more library cart passes and shit for helpin his white boy write up some religious shit for the pageant. You can take one look at the cover and tell you that maybe randy and the beast need to look up in some bibles and pray on that shit more. 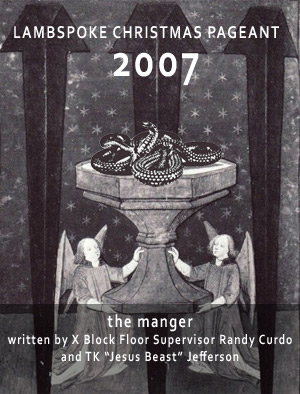 Damn, to begin with you got snakes and shit. I don't even know what a manger is but I think it's like a bucket you put a baby in. Ain't no evil clavo snake crawling up on a freaky ass birdbath. Little angel niggas liftin it up like it weigh eight grams. Detroit Ladyfingers said it look like a dice table but that nigga think everythin is a dice table. He just looks for some excuse to roll out and lose his cigarettes and titty pictures. Dan Hitler give me some unrequested input sayin it look like odin shit or whatever retarded church white power come from.

That ain't all that is fucked up about the program though. On top of that weird ass cover you got the contents, which was a list of some people I ain't ever heard of from X Block, like Pig Pipe and CC Jelly Jacks, you got this big fold out map which I think is a map of lambtown.

Tormentin niggas tryin to hatch some escape plans or some shit. Aint no way out nigga, put down that map right now. You in here for triple life on account of bodily rapes you did on some lynxes, dont go tryin to get out the house youll just get yourself shot or zapped by some robot. Backwards shit and hebrew stars? Please.

You think you gonna open up a door and Rabbi Zig Zag is gonna roll up some kush and wrap yall around trees until you open the secret israel hatch and fly away home on a hebrew cloud? No, ain't no clavo jew door waitin somewhere. Ain't no backwards niggas gettin out. You down here for good, bitch. Get drag out by DOBS send your bitch choker to some needy white boys in connecticut aint got enough inches. You leave when its stew time, nigga. Not before.