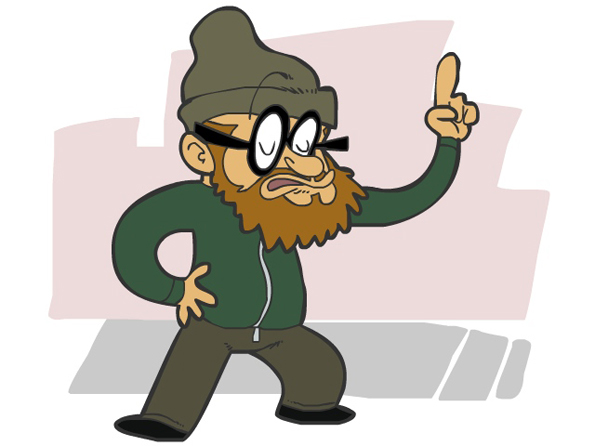 Look, if I want to give and receive presents to celebrate the birthday of a man who was nailed to two pieces of wood, please don't debate my logic with me. According to legend, Jesus (a.k.a. Young Hova) was miraculously birthed by the Virgin Mary, a woman who had never fornicated with a man in her life. Maury Povich's television show was not yet nationally syndicated, but I am frightened by the thought that the past 2,000 years would have been dramatically different if Maury had the chance to have the Virgin Mary as a guest.

Joseph, in tears, speaking to Mary, with Maury quietly observing: "What do you mean our neighbor Terrell Watkins is Jesus' father? I thought God immaculately planted the baby into your womb? You didn't even let me hit it!"

Mary's retort: "Joseph, you've neglected our marriage for years now. Don't you get it? Terrell understands me. He doesn't criticize my weight. He loves me for me. Not the way my burka accentuates my body's curves."

Unfortunately Terrell and Mary's affair was never exposed, and we were left to plow through 2,000 years of genocide, war, and televangelist prostitution scandals. All because a guy could turn water into wine and fish into goats, not to mention that he had the ability to walk on frozen lakes. I also heard he rode a Hoverboard, and that he used a Gray's Sports Almanac he acquired in the future to gamble on football games in the 1950s.

Truthfully, I only celebrate Christmas because presents are fucking awesome. I will play along with any tall tale my family acknowledges, regardless of how far-fetched it is, if it means I skate away from my grandma's house with a new sweater, 5 new DVDs and a check for $25. Wouldn't anybody?

Some people want to pass up the opportunity to receive awesome presents and enjoy a free turkey dinner, instead opting to spoil everybody's fun by suggesting Christmas has been grossly misinterpreted by Americans.

"December 25 is actually the day Romans and other Pagans used to celebrate Saturn, the god of agriculture. It is highly speculated that Jesus was born in May. Also, it's so idiotic how Americans celebrate and worship Jesus Christ. That wasn't even his name. It was Yeshua Ben Yosef!"

Look motherfuckers. Ol' Dirty Bastard's real name was Russell Jones. But did we call him Russell Jones? No, we called him Ol' Dirty Bastard. When I was 5 years old, I requested that my mother no longer call me by Mac Lethal (my legal birth name), and instead call me Zortex. She obliged, because she was a good mother. Christmas Conspiracy Theorists need to focus on being good mothers. If Yeshua Ben Yosef wants to be called Jesus Christ, or Lemony Snicket, or Agent Michael Forbes, we should oblige. People should be able to choose their own noms de plume.

Also, you mean to tell me that if a universal holiday were created to celebrate the birth and death of Ol' Dirty Bastard, and everyone opened amazing presents after a delicious swordfish dinner, that you would refuse to acknowledge it? Instead you'd focus on his chronic gonorrhea and illegitimate children? Shame on you. Holidays with presents involved are awesome, and should never be questioned.

However, I am baffled as to why the owners of Chinese buffets don't celebrate Christmas. The only guess that seems valid enough is that to them, Jesus is the guy they smuggled in and hired as a dishwasher. They should still let people take the day off and celebrate his birthday, no?

People affiliated with the Humane Society

I can just see it now. A 79-year-old man, who has been homeless since 1983, spends all day begging people for pocket change. He finally acquires enough to buy himself a chicken salad sandwich at the gas station, and he does so, which leaves him with about 17 cents. As he is walking out of the gas station, he is approached by a 31-year-old bell-ringing woman, who is shaped like she is made out of Legos with pieces of pork gristle glued to them. She stands in his path and says to him,"Care to donate change to the Human Society effort of America?" Hopefully he says, "Bitch, I am saving up for a bottle of gin now. Fuck puppies." But you never know. The way Humane Society representatives speak to human beings is surreal at times. Especially during the holidays.

Dogs know what Christmas is, people. Hello? That's why the Humane Society pushes extra hard during Christmas season, so they can buy dogs and cats Xbox 360s and Nike sweatsuits.

You have to wonder if at least one time, seriously... ONCE, in the history of animal shelters, if some socially awkward female volunteer stayed an hour or two past normal operation hours, and out of delusional Christmas sympathy, fellated a Labrador/collie mix named Bosco in his kennel. He probably sat there with a drooling, literally shit-eating grin the whole time. Unaware he was being blown. Unaware it was X-mas. Sitting there thinking... "I LIKE FRISBEES." Because dogs are dumber than a man with a brain injury who just huffed 14 cans of spray paint aerosol, he just sat there and blasted off in her mouth. Then he took a nap.