A few days ago I realized I've misspent much of my time here at Indiana University. As a journalism major I am spending more a year here than I will ever make out in the real world. I'm sure you'll agree that's a real shame. You know how IU is. You know how life can be on campus. Every day I walk past dozens of hemp-necklaced testosterone emitters and braying, horse-faced Chicago girls, and in the end it will all be for naught. I'm in a rut, and I need your help to get by.

You see, Mark, we share several common bonds. You attended Indiana University. I'm a student there now. I'm a basketball fan; you bought an entire NBA franchise. You worked at a Dairy Queen and I spent three years of my life working at a McDonald's. Hell, Mark, if I was a billionaire Hoosier-turned-Texan we'd basically be the same person. But I'm not. This is where I need your help. 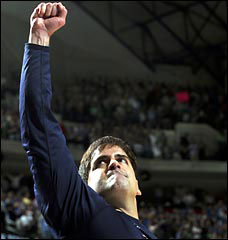 I will make a similar fist-pumping motion when you send me a check for a million dollars.

I'm sure you're very busy so I'm going to get to the point here, Mark: I need money. Your money, to be specific. Sure, I thought about other famous IU alumni. At first I was going to hit Jane Pauley up, but the thought of asking a Kappa Kappa Gamma girl for anything besides a spare penicillin tablet conflicted with my beliefs. I was close to sending Kevin Kline some loan paperwork before I realized I hadn't seen a single movie of his. I'm familiar with you and your body of work, Mark. You and me, we're kindred spirits. Two peas in a pod. A pod called “Indiana” on a branch named “brotherhood”.

I'm no business student but I'm trying my hardest to carve a path to success. You pulled yourself up by your bootstraps. I can't afford boots. I bought my last pair of shoes over a year ago. If I pulled their strings they'd disintegrate, and then I wouldn't have anything to eat in between paychecks.

It's hard, living here in Bloomington with no cash. I've tried everything to get by. I worked at the Little Caesar's at the K-Mart on Third Street for almost six months. I did some time at the IU TeleFund and I almost took a gig at Steak and Shake before the hiring manager told me “there's a meth problem among the employees” in a tone most people use to discuss cleaning their gutters. Even now, as I write this, I am technically working. This very well may change when Lowtax comes back from vacation and reads this front page, but that's nothing to worry about. How do I know that? You're my boy, Mark. You got my back and I got yours.

I'm sure you've experienced this song and dance before, and I want you to know I'm no beggar. Unlike most people, who would probably take the money you give them and spend it on tinfoil and household cleaners, I got plans. You're the final piece in my puzzle to the path of success 2.0. As you can see, I have already been working on my use of buzzwords. But with your money, Mark, I could do so much more. Imagine what I could do with even the smallest of contributions: 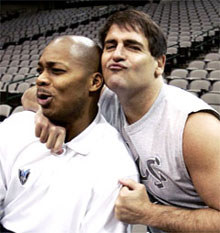 Please don't sexually harass Dave Chappelle Mark Cuban :(
I understand my plans (especially the first two) might seem a bit self-serving. I would submit, however, that even those would go on to better Bloomington and by proxy the rest of the world. If my credit cards were paid I could immediately use them to buy more electronics. Sales associates across the state would get huge commission bonuses, and since I don't have any curtains passersby could watch movies on my brand new 100” high definition television. If I had a new car I'd be more calm on the road, and wouldn't feel such a, say, malicious urge to speed up when people pulled out in front of me. A new car for me means less intentional wrecks for Bloomington, and I assure you this is a good thing.

That said, please don't think I'm looking for a handout! I'm an Indiana boy and I was raised better than that. I come from a line of hard-working, honest, stable mole people Southern Indiana residents, and I would be more than happy to lend you my services in return for a generous gift. Give a man a fish and he'll eat for a day. Give a man some of your billions of dollars, Mark, and he'll buy a fishing yacht with with a gold-plated toilet. Tell me you wouldn't like Monroe Reservoir more if every sink in your floating home sprayed Cristal instead of water and had its own swimming pool in case the pond's water was too cold.

Listen, Mark, I got talent. Buttloads of it. In case you didn't notice while reading this letter I'm an excellent writer. I even used a semicolon in the second paragraph! I'm a smooth talker and, as of the last time I checked, I hold the single-day record for donations from previous non-donors at the IU TeleFund. Have you ever talked a fortysomething woman who said she was “flat broke” and “having trouble feeding her kids” into donating $50 to the alma mater that put her in debt in the first place? I did. You know how? I have no soul. As I understand this is an important part of the professional sports business, especially when you're dealing with David Stern.

But a gifted mind and a silver tongue aren't the only two things I bring to the table. For instance: I am fully capable for playing World of Warcraft seven hours a day and totally justifying it. Most people would feel guilty for spending half their waking day as an Online Computer Gnome, but not me! I'll sell that account for huge money one day, right? I am also a strong multitasker, as made evident by my body going into what I call “wacky resistance mode” every time I speak on a cellular phone. What am I going to do while my brain's occupied with a phone call? Turn the thermostat in the house up to ninety degrees? Let the dog out the front door instead of the back and only realize he's in danger when I hear a look out the window and see him pooping on the highway in front of our house? Take the batteries out of the TV remote and throw them in the trash can? I've done all these, Mark, and I'd be glad to do even more under your generous employ.

I'm not trying to play a pity card here, either. The outside of my place may look like a tree ate several tons of aluminum siding and moss and vomited up a house, and I might know which grocery towns in store drop the freshest food in their dumpsters, but it's cool. I've survived over 23 years and I'm sure I can keep kicking without your help. Please note that I almost deleted that sentence for fear you'd read it and decide not to help me, but it's true. I believe in being honest. So what if I'm writing this update from the public library's basement, and that's only because they haven't found me and kicked me out for stealing their toilet paper to use at home? I am poor but happy. I can only hope you will make me rich but happy.

As you can see, Mark, I have a lot to offer both you and your organization. If you would kindly email me and tell me that yes, you would be more than happy to send me an ungodly sum of money (and possibly Dirk Nowitzki, since I'm too short to paint the trim in the living room and can't afford a stepladder), I would be thrilled. Ecstatic.

Thank you in advance for your generosity, Mark Cuban. You are a man among men and an exemplary model of what an Indiana University alumnus should be. I'm never good at ending these things, and I firmly believe pictures are worth more than words, so let me show you what our future could be like together if you decide to make one IU student's life a little better. Thank you, Mark, for everything you do. 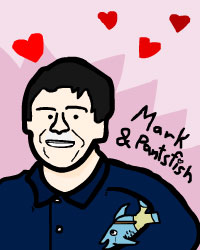