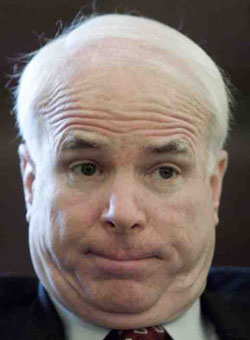 "That whore," John McCain intoned aloud, savoring the word. He rarely spoke to himself, unless it was to call his beloved wife, Cindy, one of a well-stocked repertoire of names. "That incorrigible hooker."

She had played another of her little tricks: the box of Keebler Town House crackers, the buttery treat that McCain enjoyed during his rare off hours, was perched on top of the six-foot refrigerator. Whether the placement was conscious or not, she knew very well that McCain would be unable to reach it. He made a series of vain attempts, angling his body and extending his arms like a child playing airplane, but quickly realized the pursuit was futile. "That cunt."

Standing on his tiptoes, McCain narrowly managed to brace his chin on top of the fridge. First he gnashed at the box, hoping to catch it on one of his gleaming, finely-groomed teeth. He had begun the second phase of this attempt, extending his tongue toward the box and coming tantalizingly close, when a husky, accented voice shocked him from his hungry reverie.

"John McCain. I help you with this."

McCain wheeled around, instinctively reaching to his shoe for a sidearm he hadn't worn in forty years. "Who the hell are you? Get out of my house before I make my whore wife beat your Russian head in."

"I do not think you will do this, John McCain. I have word for you: Baltimora."

"I don't speak Russian, you prick." John McCain opened the refrigerator, looking for an object solid enough to use as a weapon.

"Is not Russian. I repeat this word. Baltimora." The man reached into his pocket and produced a red rubber ball, which he held aloft in front of him. "Baltimora."

McCain, finding no luck in the refrigerator, was raising his arms in an awkward gull-wing pose in an attempt to open the freezer. "Get your goddamn ball away from me, Russkie."

"John McCain, observe." The Russian tossed the rubber ball in a high arc over McCain's head. McCain swiftly shot his arm up and caught the ball in midair.

McCain wagged the ball at the intruder. "Listen here, Boris: I'm too old to play catch with some..." he trailed off as his eyes focused on the ball in his hand. "Wait a minute. Wait a god-damned minute." McCain extended his arms, slowly raising them high above his head until his fingertips nearly touched the ceiling. He stared at them, seeming reluctant to bring them down for fear that he'd never raise them again.

"Impossible it seems to you, John McCain. But is true. You will begin to remember now. Baltimora."

"Huh?" McCain was still staring at his raised arms in childlike wonder. "Remember what?" Suddenly, he dropped his arms and froze, staring into the space ahead of him with unfocused eyes. A moment later, he put his arms to his temples and rubbed them hard, shaking his head in horror and disbelief at half a lifetime of surging memories. With an audible snap, his body straightened, rigid and military. A soldier; a killing machine.

McCain stared at the Russian with the cold eyes that never leave a certain type of man, even long after his jowls have softened with age and comfort. "Project Blackstar." He issued the words like a command. "God help us. Project Blackstar, those maniacs. The false president. The new revolution."