His luminescent smile was the only trait Khan shared with Barack Obama, the strange cartoon alter-ego with whom America had fallen in love, and now he was beaming it at full wattage. "John McCain? Yes, I see why we can't kill him, but by what insane standard do you call him the most dangerous man in the nation? Surely you're joking with me, Mark Ramses, but I warn you that my sense of humor is limited."

"John McCain is not what he seems. He may look like a kooky old vet, a doddering, grandfatherly old coot, but you must believe me, he's an inhuman monster bred for killing and educated in the most effective school for murderers South America has ever produced. He was one of ours, an SCIA man, until he botched an op with that maverick streak of his and we had to deprogram him. The man spent decades thinking he was a charming old 'Nam vet, but we have reason to believe that the hypnotism may have been broken." Ramses had hoped that his speech would have some impact, but Khan remained unflapped.

"That has no effect on this election, Mark Ramses. I will still defeat McCain, your futile little Project Blackstar will be complete."

"You don't understand," said Ramses with a voice approaching desperation. "We can't kill him because it's tactically destructive to our aims, but he can kill us. He can kill every goddamn one of us, Khan, because he's a monster. When he looks at you, all he sees is a diagram of bleed points. If he really likes you, maybe he'll size you up for how long he could survive on your meat in an extended combat scenario."

"What do you suggest, Mark Ramses? That we run and hide?" Khan toyed with the knife.

"Mr. Khan, with all due respect, you've served the Secret Central Intelligence Agency with admirable dedication, but perhaps our initiation of Project Blackstar was premature. If we bow out of this one, we can do this thing right in 2012, when McCain will be long dead." Ramses was sweating profusely now, eyeing the knife that twirled beneath Khan's fingertip. 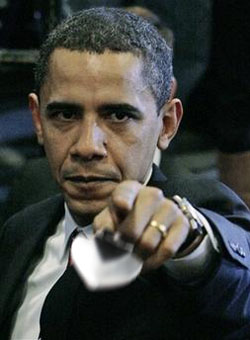 "Project Blackstar is not my operation, Mark Ramses. Your operation is the election of a false president, the instigation of a little revolution. Martial law, a mere power-grab for your agency and a little paycheck for me. My operation is the seizure of America by a righteous prince of Iran. My operation is a tide of fire washing over this wicked land, and I am now in a position to win this election without you, and the American people will buckle like blades of grass under the crushing foot of Allah. No man can stop me." Khan picked up the knife.

Even as he began to make his final case, Mark Ramses knew that his pleas would crash against the unbending will of a fanatic. This was supposed to be about the power and the paycheck, he said. You can still be rich; you can still reclaim the Iranian throne with all the might of the United States military at your back, he said. But he knew Khan had grown into bigger ideas; maybe all the messianic praise heaped upon his alter-ego by the American public had gone to his head, and god damn it, he should have seen it coming. He had difficulty pinpointing the exact moment when his words became soundless, when his vision faded to black.

In Coronado, John McCain kissed his sleeping wife on the forehead. "Goodnight, you musked-up tramp." Following the Russian stranger, McCain walked slowly out of the favorite among his dozen or so homes, past the pictures of the family he had grown to love so well, the ghosts of his hypnotized life.

The faces of a thousand men from his past flashed in his mind's eye: SCIA spooks, Venezuelan combat trainers, petty Washington bureaucrats, Vietnam whores, foreign dictators and American presidents. "I'm going to kill them all," he announced, not speaking to the Russian or to anyone else in particular. "I'm going to kill every last one of those sons of bitches."