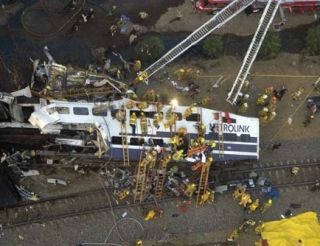 Rush hour on Metrolink.These days it's not too uncommon for those of us in Southern California to turn on the TV and see a couple of cars from our regional rail network toppled over on their sides and on fire.

In 2002 a freight train collided with a Metrolink commuter train in Placentia, killing two. The crash was caused by two BNSF engineers who were too busy chatting to notice a yellow signal. By the time they saw the red it was too late to avoid a collision. Judging by railroad hiring standards these days, that must have been some stimulating conversation.

Then in 2005 a man placed his SUV on the tracks in Glendale. The SUV was struck by a southbound Metrolink train which caused it to jackknife and hit a parked freight train on one side and a northbound Metrolink train on the other. 11 died. First responders from the nearby Costco were praised for their quick work in delivering first aid supplies to the victims of the crash, but drew criticism when they asked to see membership cards before administering help.

And now we have Chatsworth. Engineer runs a red and hits a freight train head on. 26 people are dead. Guinness arrives at the scene a short while later and declares a new winner.

When you see such a tragedy unfold live on television the first thing that usually comes to mind is how you can use this unfortunate event to further your own agenda and point fingers at high-ranking government officials. Before the bodies were cold the soulless vultures who follow mass transit in Southern California and elsewhere descended on the Internet with their "I told you so's" and armchair investigations. Suddenly everybody became an expert. 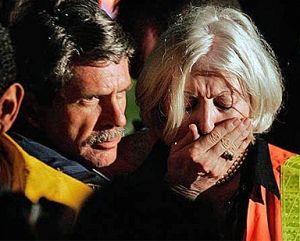 LA County supervisor Zev Yaroslavsky may still be a jerkoff but Denise Tyrrell is all class.Metrolink spokesperson Denise Tyrrell was criticized early on for stating the facts, that one of their engineers ran a red signal. She didn't say anything else. She simply told the truth, which was that the guy ran a red and who the hell knows why. She was accused of shifting the blame from the agency to a dead man. I say this woman is a goddamn hero. She's the first spokesperson for a public agency to not lie to our faces!

And you know how I know she was right? She quit. She left a seemingly cushy job that normally consisted of telling people, "We don't have any new information at this point in time (and by the time we do we're hoping you'll have forgotten about it)." The NTSB reports that have come out so far all support her initial announcement.

Metrolink itself was criticized for opposing Positive Train Control, a mechanism that would stop trains automatically should the engineer not comply with signals, because it's too costly. I know, I know, the big bad government agency doesn't care about safety. But have you seen how mass transit is funded these days? Jesus, even after this accident the only California budget proposal that has even come close to passing includes $89 million in budget cuts to the MTA and $13 million in cuts to transportation for the rest of Los Angeles County.

But you can't put a price on human lives! Well then, let's put a measure on the November ballot that would increase taxes to raise funds to install Positive Train Control systems on Metrolink and see if you want to pay for it. Apparently the price of 26 lives is $2.3 billion. But yeah, let's go ahead and vote no on every single transportation measure in California and vote for anti-mass transit representatives and then call Metrolink unsafe.

Then information about the engineer starts leaking out, each successive layer of detail causing you to mutter to yourself, "Jesus Christ..."