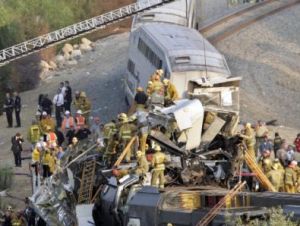 If you're wondering where the Metrolink locomotive is, well, it's in there somewhere.It turns out, that this Metrolink engineer, charged with the task of keeping hundreds of people safe on their journey from Downtown Los Angeles to Ventura County, was text messaging while operating a 220 ton locomotive. And he wasn't just texting his ho like most of us do, he was exchanging messages with teenage railfans.

These are the same kind of railfans I've discussed before, the kind that consider the whole of Southern California's rail network to be their personal life-sized model train set. They go out every other day and shoot videos of the Amtrak and Metrolink trains and share them on YouTube. Hey, assholes, we're trying to commute here!

But they aren't passive observers. No, they have to bother the conductors and the engineers and apparently, befriend them! They don't want to talk to girls in their class. They want to talk to fat middle-aged men who work on the railroad!

Your opinion of the fact that this engineer was texting these kids while he was operating a commuter train puts you in one of two camps. If you thought that this guy was just a mentor to these boys, a kind of "train hero" that they looked up to, and that this whole thing was "just a mistake", then you are part of the pussy generation that doesn't keep score in Little League games anymore and should never reproduce.

But if the thought of a 44-year-old man texting young men about trains disturbs you, then you are a great American and should have some kids as soon as possible if you haven't already.

The mantra about this crash seems to be, "Don't be so quick to judge (anyone who isn't a high-ranking government official)." Whatever happened to judging? A man killed 26 people when he ran a red signal in Chatsworth that may or may not have been caused by him being distracted by his cell phone and we're the assholes if we suggest that he may have been vetting some train nerds in order to fuck them after his shift because he's a fat loser who is unable attract a mate who won't hang himself? 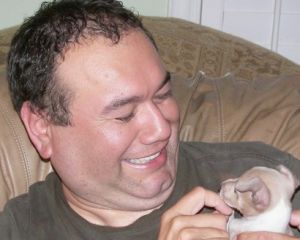 Your tax dollars at work.His only other companionship besides four miniature greyhounds was a 77-year-old woman who blew him off last Christmas. Unlike teenage railfans, she apparently had better things to do with her time left on this planet than hang out with this winner. Hey, hey, hey, don't be so quick to judge!

Combine all that with a criminal record consisting of stealing Xbox consoles and you've got the kind of guy you'd want operating a train with 300 people onboard. Ditch the pain at the pump and take Metrolink, now with 33% more obese diabetic shut-ins!

Craig Williams, the father of the boy who was exchanging text messages with Sanchez before the crash, is trying to defend his son from criticism. Here's a guy who, when he first found out about this texting nonsense, should have given Robert Sanchez a knock on the door at his shack in La Crescenta and told him that if he didn't stop texting his son he would get an old fashioned ass kicking. No, his beef is with the media. WELL, PAUL MAGERS ISN'T TEXTING YOUR 'SPERGIN SON ALL DAY, CRAIG.

I guess now we know why his kid is into trains.

But whatever you do, don't post comments about the fucked up engineer! People want to make the dead out to be saints. No, this guy was a creep. He was a creep in life and a creep in death.

Whether the guy was distracted by his phone, went into diabetic shock, had a heart attack, or decided to end his miserable life, this whole thing is fucked up.

As a reminder for those of you who died in last Friday's Chatsworth accident, you are eligible for reimbursement under Metrolink's Quality Service Pledge. Under this program commuters who are delayed more than one hour from the published train schedule are entitled to a replacement ticket or a universal 4-trip ticket, depending on your type of pass.