Just after Halloween, I rounded up a bunch of my friends and drove into the northern part of New Hampshire to canvass for votes. The southern part of the state is always covered by people from Cambridge, who show up in tweed suits on the doorsteps of rural farmers to ask whether or not they know where their local polling place is. The farmers usually patiently explain that yes, of course they know where the polling place is, there's but one in town and it's been in the same goddamn library for the past eighty years. At this point the Cambridgeans nod sagely, politely extricate their leg from between the jaws of the farmer's pet wolverine, get back into their hybrid, and make it halfway to the next house before collapsing from blood loss. 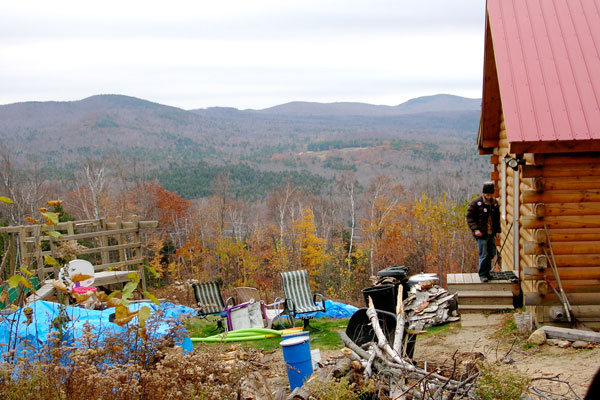 junkyard on a mountain top

When it comes to campaigning, the northern part of the state is completely different. North of the lakes region--around places like the heroically named Dixville Notch--there is tremendous turnout from areas that are traditionally ignored by campaigns because of their isolation and historic lack of trigger discipline. These are old white people who love nothing more than a town meeting and a good vote. In other words, the difficulty is not in getting the voters to vote, but just getting to the voters. However, the undead wizard Barack Jaffar Djinn Obama has conjured up an army of zombielike followers to invade these fruitful provinces in search of that which sustains him: the sweet, sweet nectar of the human vote.

Election weekend, I was working across a few small towns, each of which averaged about 30 people per square mile. The guy who ran the local was an little old man with palsied hands that trembled as he counted out the sheets. My friends and I grabbed some addresses, some maps, and were off. 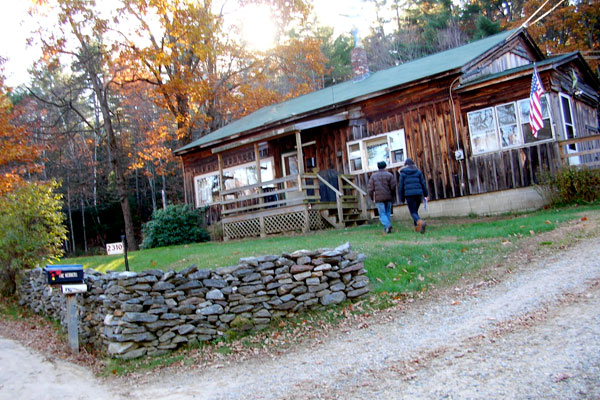 new hampshire and the castle doctrine: every doorway an adventure!
Clarice was ninety years old and not more than five foot tall. She lived alone in a crumbling cottage in what had once been suburbs in a now deserted part of town. When we knocked on her door, she peered at us through a window caked in oil and cat hair, then opened the door. "Come on in," she said. "Can't have the cold coming in from outside."

We told her we were from the Obama campaign and just wanted to know if she needed a ride to the polls and if she knew who she wanted to vote for. "Oh no, I don't need a ride," she said. "Every year, my daughter shows up and takes me over. Don't know who I want to vote for either. You hear so many different things and don't know what to believe." She shifted from foot to foot, clearly uncomfortable with our presence. The carpet was the color of squashed peas and felt like dried soda beneath our feet.

She sighed, and sat down into her rickety stairlift, its tracks running up and out of sight. She looked at us. "Guess I'll just do what I always do, and make a decision once I get into the voting booth. That's what I've got this coin for. I wish you luck. Goodbye!"

With that, she activated the stairlift, and ascended silently, like the Lorax, into the gloom of the second floor, staring at us all the while, and disappeared into the darkness.

Albert and the Bear 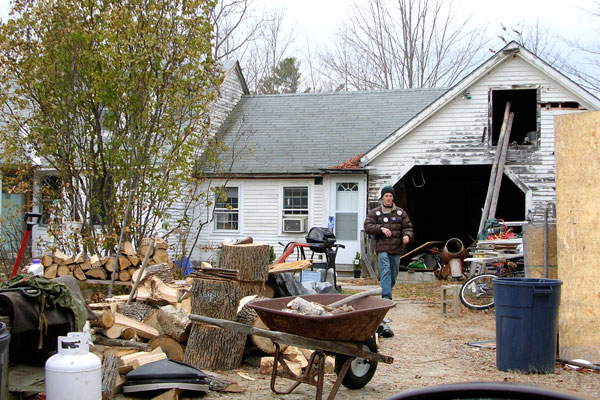 CAN'T YOU SEE I'M SWIMMING IN CASH?
A long driveway off the state highway led to Albert's house, an old farmhouse set back in the woods. No one had answered the door, and we were just dropping campaign literature when we heard a gunshot and subsequent whoop.

Albert--a middle aged man wearing boots and a plaid jacket--stormed around from his backyard with glee in his eyes. "Heya kids!" he yelled. "Come see the bear I just shot!"

Sure enough, a black bear lay dead in his backyard.

Albert sighed a satisfied sigh and tossed his gun back on the deck. "What can I do for all y'all again?"

When we told him we were from the Obama campaign, his eyes narrowed.

"Can't stand those foul liars and crooks," he spat. "All of 'em in Washington. They're all scum."

He stared back at me. "You know who pays most of the taxes in this country?"

I, reflexively assuming that he was some rich old man pissed about income taxes, said that I understood the wealthy bore the brunt of the tax burden but that was a price that needed to be paid for prosperity. He stared at me as if I were a lunatic.

"It's the middle class that pays the taxes," he said finally. "See, you can't cut taxes on the middle class. It's irresponsible for them to take less of my money. Give them more of it, I say!"

With that, Albert leapt up a ladder to the roof of his barn, and began sawing away wildly at large tin sheets he was using to patch the roof. As we drove away, he was swearing like a sailor and nearly eviscerating his terrified chickens as he rained tin daggers down from the sky like an angry, incomprehensible, monstrous and bearded god. 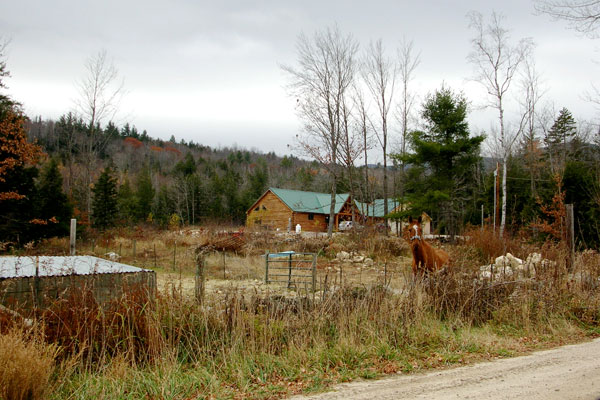 this isn't like a bad horror movie at all
In order to get to the Thistledown residence, you had to drive across several miles of dirt road, through some of the most desolate and downtrodden homes I've ever seen in the northeast. Rusted out Ford trucks balanced on top of great boulders as if in homage to the gods of rock and steel. Half-collapsed shacks with mattresses sticking out of windows and smoke pouring from a chimney. Odd, silent, padlocked houses, sitting on blocks without steps leading to any of the doors.

Then, on the right hand side, the Thistledown house emerges. There's a fairly new Jeep in the driveway and an RV in the side yard. A modern satellite dish on the garage and a Weber grill on the porch. In order to get to the door, you had to walk up the stairs to the second floor deck. There were great floor to ceiling windows and sliding doors with glass looking out to the sunset.

It was then that we noticed that the inside of the house was in complete disarray. Torn newspapers, upended beer bottles, and filthy dishes in the sink.

And, on the deck, a baby's bassinet full of spent shotgun shells, rotting in the rain.

We scrambled away from the deck and hastened from that house into the gathering dusk.