If You Don't Celebrate Thanksgiving, You're an Asshole, Cultural Differences Aside Of Course 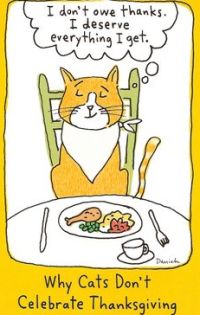 Ugh, cat, you think you're so edgy. On the Internet there are these guys who claim to not show identification when asked for it in order to complete a credit card transaction. They say that it's not required by the credit card contract and it opens them up to identify theft and a whole host of other things that don't make any sense.

To see one of these jerk offs in action is a rare treat. When asked for ID their eyebrows perk up as if to say, "Gotcha!" They proceed to indignantly lecture a minimum wage earner who is just trying to do their job about the credit card contract and how it expressly forbids requiring further identification to complete a credit card sale. I would spend my net worth of $48 at any store that allowed their employees to slap the stupid out of these people.

If the store refuses to give in to their hogwash they'll rush home and furiously post a thread on a forum about how so and so chain is evil and proceed to write an angry letter to Visa and demand that the chain lose their ability to take credit cards.

It never happens of course, because there aren't enough assholes who believe in this crap to make anybody who matters actually care. They stubbornly cling to the rules in a successful quest to make everybody they come into contact with hate them.

People who don't celebrate Thanksgiving remind me of these assholes. These people underestimate society's collective ability to come a consensus. We've decided that when faced with the obstacle of showing a government issued ID to complete a credit card purchase that we can't afford anyway and by doing so pressures the federal government to pony up hundreds of billions of dollars just to keep credit markets stable, we don't throw a tantrum and cry to the credit card fairy about it.

The world is so corrupt...

On our very own forums a poster once opened up her home to lonely goons who had nowhere to go on Thanksgiving because they were away at school, on the outs with their families, or watched too much anime and were unable to function in a civilized society. She put an end to that when a goon never left her house and hid in her and her husband's closet for four years.

People who flat out refuse to celebrate Thanksgiving are losers. We're winners, Niko. They don't know that we roll like this every day bro, with stuffing and cranberry sauce. Anti-Thanksgiving nuts are basically saying, "I don't want to be a part of society." They've checked out. They usually have excuses ranging from "It's a holiday founded on violence and oppression!" to "What do we have to give thanks for? Let's give thanks every day!" Both are bullshit.

First of all, anybody who killed an Indian in the name of conquest during that period of American history is long dead. We should remember those times not to punish ourselves out of a day of gorging and indulgence (otherwise known as every day in this country), but to make sure that it never happens again. I wasn't responsible for Indians getting booted off their land and I'm sure as hell not going to feel guilty about it.

And second, shut up. We like to have dinner. We like to see our families or friends or both. Real people work for a living. They may work far away from their family or friends. Thanksgiving is a day put aside where our society mostly shuts down in order for everyone to connect with their given families or those they choose to call family. It's just another facet of our civilized world.

But don't worry, we get it. You're too cool for school. You've got it all figured out. You're smarter than all of us. You see through this whole Thanksgiving nonsense and see it for what it is! Oh how I wish people could realize the error of their waves. The nerve of people to get together and have dinner. Those monsters...

These people are the worst.

People who do not celebrate Thanksgiving are uncomfortable to be around. They are usually recluses. They spend a lot of time on the Internet. They won't go very far in life. One or two will be crowned as King Asshole and make a living telling other assholes what they want to hear. They'll run a a blog with edgy entries such as, "Why I don't celebrate Thanksgiving" and "Why I like to fornicate my butthole with large objects not unlike a steel mill worker's dick" that generates a modest stream of Google AdWords revenue from people who visit their web site just to laugh at them.

I'm a cynical bastard, but I'm celebrating Thanksgiving goddammit. And when I go to buy the turkey with my credit card, I'm showing ID. I'm going to be a part of this society and their social norms whether they like it or not!

I'll tell you what I'm thankful for this holiday, that despite what you read here on Something Awful or Weekend Web, not everybody who posts on the Internet is a fucking retard.