When BioWare asked if I would be interested in an exclusive scoop on the first Star Wars MMO since Tabula Rasa, I had to pause. A true journalist must always consider how many exclamation points go after "YES" in professional correspondence. Sorry for hijacking the front page with a straightforward interview, but I'm hoping most of you are as interested in this game as I am.

Something Awful: Hi, thanks for taking the time to chat. Your e-mail was a nice surprise.

Dr. Stephen Banner: Sure thing! We're ready to go public with a few features, and I thought this would be a fun place to do it. Your articles with that old guy Cliff making fun of pictures are the best.

Something Awful: Oh, no. I think you're mistaken.

Dr. Stephen Banner: That wasn't you?

Something Awful: That was me. I did those. They just weren't my best. I made some photoshops of cats saying funny things like "moar" and "I can has" with motivational poster backdrops. They were the best, but they were more cerebral so not as many people spread them around.

Dr. Stephen Banner: Haha. Either way, nice to be talking to you.

Something Awful: Same here. Would you mind doing a quick rundown for anyone in our audience that doesn't keep up with video game news?

Dr. Stephen Banner: Of course, yeah, let me slip into marketing mode. Star Wars: The Old Republic is a massively multiplayer RPG set in the same time period as BioWare's single player Knights Of The Old Republic games, roughly 4,000 years before the events that took place in the movies. 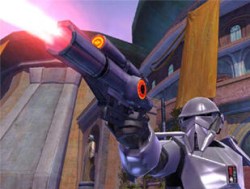 I'm the Lead Creative Producer, which means I do a little bit of everything whie keeping each department pointed in the right direction.

Something Awful: I'm sure this gets brought up all the time, but the first Star Wars MMO, Star Wars Galaxies-

Something Awful: Our site had an active guild with a fully-fledged Goontown of our own, so my experience with the game was overwhelmingly positive, but obviously there were a lot of missed opportunities that kept the game from living up to its potential. What can you guys take away from the missteps of Galaxies?

Dr. Stephen Banner: Well, The Old Republic is so fundamentally different that nothing matches up 1:1 beyond the backdrop of Star Wars, and even that can't be compared because there's a gap of a few thousand years between the games.

One thing we did learn is that George Lucas had way too much influence on Galaxies. The man is brilliant, but he doesn't have much of a history with games. Many people have said that our Knights Of The Old Republic games captured the Star Wars magic more than the latest film trilogy, so I think he understands that this time around he needs to take more of a hands-off approach.

Something Awful: Sounds like you guys have quite a bit of freedom.

Dr. Stephen Banner: Absolutely. One of the earliest missions for the Bounty Hunter class gives you the option of killing Darth Vader's great-grandfather, which would have mind-blowing consequences. Who would build R2-D2? Without R2-D2, how would Luke escape from the trash compactor?

We're approaching the game with story as the main focus, so it's vital that we have some breathing room to do our own thing. That's why we haven't "officially" shown the game to LucasArts or licensed the Star Wars brand yet.

Something Awful: When the first screenshots of your game were released, people made a big deal out of the oversized lightsabers. What do you think about the reaction? 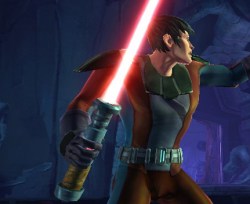 Dr. Stephen Banner: Look, anything you see from a project at such an early stage will be revised a million times by release. The final rendering engine wasn't in place, so naturally our art team went with stylized character models instead of "realistic" but unpolished realdolls like you see in Age Of Conan and Neverwinter Nights 2.

The criticism was doubly frustrating because lightsabers won't even be in the game.

Something Awful: No lightsabers, wait. Will there be Jedi?

Dr. Stephen Banner: God no. If you give people the choice, everyone will be a Jedi. The closest class we have (and this is the exclusive that I promised you) is the Midichlorian Tinkerer, which is essentially a scientist that uses four miniature droids, each of which harnesses one aspect of what is known as the Force.

Something Awful: Hold on. There are four aspects of the Force?

As I've mentioned, story is the primary focus of The Old Republic, and aside from discarded hologram recordings that the player finds throughout his adventures, most of the story will be conveyed through interactions with NPCs. Our dialogue system will be unique in that the player will be able to choose from responses that are Good (giving you less tangible rewards for quests but more experience), Neutral (giving you nothing), or Evil (less experience but more items and gold). With the Midichlorian Tinkerer's Good and Evil Aspects, he will open up two additional options in every dialogue tree.

Something Awful: Can he choke/push/levitate people?

Dr. Stephen Banner: No. what you're describing would fit into the Air Aspect, and at this time we have no plans to add a fifth Aspect. Perhaps in an expansion.

Dr. Bruce Strange: Glad to hear it. Keeping it secret this long has been difficult, as you might imagine. I'm really anxious to get the community's positive feedback.

Of course, there are some drawbacks. With so many dialogue options - that are going to be entirely voice acted, mind you! - we've been forced to streamline the character creation process by giving every player (not just Midichlorian Tinkerers) the name Nardo Pace. Some people might not like this decision, but it clears up a lot of potential headaches.

Something Awful: I'm sure there will be some negative responses out there, but really, people on the internet will bitch about anything.

Dr. Stephen Banner: Yeah, somewhere right now I'm sure someone is starting a petition. Haha. We actually have this plaque in our office that says "Petitions do not influence development, not even online petitions".

Something Awful: So, when can we expect to see The Old Republic on store shelves?

Something Awful: Thanks again for your time!