On the Importance of Grappling Hooks and Jetpacks 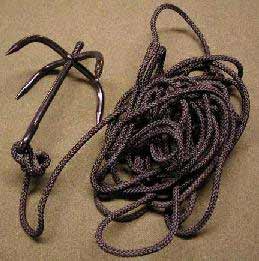 I can faintly recollect the day when my grandfather sat me down and said, "The life of the man with a grappling hook for a hand is the life to lead! There is nothing else that can compare. Nothing!" He then pulled out an axe and prepared to remove one of my hands. This, to me, was heresy, for I had been raised since birth to believe that the life of a man with a jetpack stood far and above any other form of living.

"No," I told him in a terrified voice, "you're wrong." It took no more than an instant for my bladder to lose its composure, transforming my pants into unprotected wetlands that spread to the nearby couch I was sitting on. My eyes, too, became tiny water worlds, where dry land was but a myth. Seeing the damage I was doing to his couch, which had survived two world wars and the depression, he felt it was best to get me off of it.

"Forget it, you're too young and stupid," he said as he pierced my shoulder with his grappling hook and retracted me from the couch. A look of disappointment had annexed his person, leaving nothing more than a graveyard frown that loomed over me like an obelisk. He gently pulled the grappling hook out of my slightly damaged tissue all the while avoiding eye contact. I would not be afforded such courtesy. After that he fired his grappling hook at the ceiling and retracted himself upwards. There was an awkward silence for a few minutes, and then he asked me to leave in a strained voice. Clearly he was tired of hanging from the living room ceiling and wanted to climb down in private.

My journey home was quick, as are all journeys powered by jetpacks. I strode through the air marking my wake with a stream of tears, which may well have worn tiny liquid jetpacks of their own. When I got home, right after changing pants, I surveyed my jetpack from a different perspective. My mind was a quarry of quandary as I debated the merits of living the life of a man with a jetpack. It enabled me to fly, I thought, but when it came to grappling, it could grasp only one thing - me. Even then its harness was rather painful and made me sore as it rocketed me through the air. The jetpack itself was awkward, weighed me down when I was not flying, and made it hard to sit down or maneuver crowded areas. Like a horticulturist of doom, my grandfather planted the seeds of doubt in the potting soil of my brain. 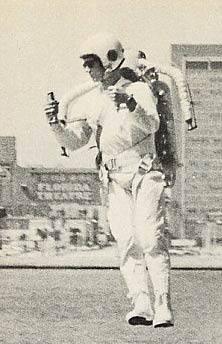 To fly is to truly live (while in flight).

It should come as no surprise that I spent the next day at school glowering at the kids with grappling hooks. My jetpack chums and I hovered in our own area away from those kids and their filthy grappling of various things. We had our jetpacks and we did all right flying around and generally making ourselves at home in the wide open air. In flight, the grappling hook kids seemed pathetic, for they could not go anywhere their grappling hooks could not travel. The sky was the domain of jetpack men like my father and me. Those with grappling hook hands seemed to be only half human, incapable of reaching our great heights. But yet looking down from up high, I could not appease the great hunger pangs of jealousy as I watched them grapple. I could not grapple no matter how hard I tried.

There was a longing in me, a desire to bridge this great social rift. But the rift was wide and I could not reach the other side, nor could I extend my grappling hook out to the other side and retract it towards me. Flying over the rift, what would that do? I would be at odds with the people on the other side. They would be cold and distant, leering at the blankness of my normal human hands and their brutal inefficiency to grapple. The cold metallic jetpack birthmark on my back would do no more than elicit snide remarks and disdain while I stood on the ground and jealousy when I flew above them reaching heights they could not grasp.

I was at a crossroads in life, and two paths presented themselves. I could continue as is, forever relegated to live the life of a rocket man, or I could cast that hunk of metal aside and sacrifice my arm for a bionic grappling hook with which to grasp the unreachable reachable. This decision was not an easy one, for it involved choosing my entire destiny. How many friends would I make with my grappling hook? I would certainly lose my jetpack friends. But then maybe I would meet a beautiful woman with a grappling hook hand and fall in love. Of course I then might have to grapple with divorce and child support. With a jetpack, I had no worries of such things. Problems seem so meaningless when you can simply fly away and forget they exist. The sky would provide a path for me and the jetpack would carry me wherever that path went. Or so I was led to believe throughout my years of indoctrination into jetpack society. This was a paradox, for as far away as I tried to fly, the problem was always trailing behind me. It had hooked on to me. I could not fly away from destiny.

It was a snowy day when I made my fateful decision. I flew back to visit my grandfather and inform him of my choice. He was delighted to see me at first, but that faded when he heard my plans. 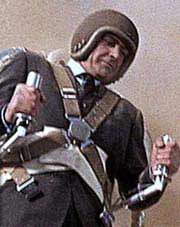 It is easy to look down on people while wearing a jetpack, but that doesn't mean it's impossible to see eye to eye with them.

"You're saying you don't want a grappling hook hand?" he said in a judgmental voice, ready to disown me.

"Then take that ridiculous jet machine off your back."

"But what use would you have for a jetpack and a grappling hook? You can't fly and grapple at the same time!"

There was a look of profound bewilderment on his face as he contemplated the myriad of taboos I was suggesting he help break. Grappling hook people and jetpack people have long stood apart, always defiant of one another. Switching sides was a great choice, one usually motivated out of spite and anger, as had been the motives behind my father's choice. Here I was suggesting that the line dividing us was paper thin and that we could be one and the same.

"Says who?" I inquired, blowing the dust off of antique thinking.

"What? What? This is the way it has always been, you damn fool! You think you can just change the world like that?"

"But why not?" I pleaded he answer, knowing full well the pain I was causing him.

"You just don't!" he shouted, vehement in his defense of the established law. How could he not be? The elders are always first and last to defend the world that made them, never wanting to lose ground to a new order that might soon forget them. They want to be appreciated as we all do, jetpack or not. They stood their ground against the rise of jetpack society, and even flourished as assumed equals, breading new generations of grappling hook equipped people. Grandfather looked at me in anger, not so much at me, but in the world that bred us to be enemies for no reason. I said nothing, but my silence gnawed at him like a rabid ostrich with nothing to lose.

"I suppose you're right in a way. People have been separated for too long. These grappling hooks can reach a lot of things, but not common ground. And you jetpack people, well, you just fly over it. But maybe with both people can find their peace and live in it."

Grandpa's words brought a tear to my eye, and also caused me to wet myself. This was mostly because as he was talking he was sharpening his axe. This grisly chopping blade would remove one of my hands so that it could be replaced with a glorious grappling hook apparatus and cut through generations of ideological differences. The pain of orphaning one of my hands was intense, but the pain was countered by the power of my will and the spirit of change.

That was a long time ago, my friends. But that was the story of how I gained my grappling hook hand and kept my jetpack. A lot of years have passed and my grandpa has since been imprisoned in a crystal, but his words still echo like the roar of a jetpack or the clink of a grappling hook digging into a hard surface. Today I fly freely through the air, and when I see something below, I can grapple it with ease. It is true that at first I was shunned, but people began to accept me and even admire me. Man has no need to stand apart over petty differences, not when those differences can compliment each other so beautifully. Why must we fly over and never take time to grasp the small things? And why must we always be content to grasp what we can and never aspire for more? Truly the life of a man with a grappling hook for a hand and a jetpack is the life to lead.