Saddam: The Next 20 Years 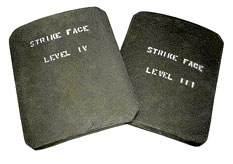 Stop the madness! Also, stop the bullets!With over 20,000 people registered on our forums you shouldn't be surprised to know that a number of them are in the armed forces of the United States and other countries. One particular poster by the name of GreenMeat is a Staff Sergeant in the army, and part of a 20-soldier military intelligence platoon that's an element of the 25th Infantry Division. In January he and his unit will be heading out to Iraq. Because his unit is not considered front line they have received a low priority for being issued SAPI trauma inserts for their Interceptor body armor. These hard armor inserts go over the soft armor of a vest and protect from assault rifle rounds that Kevlar can't stop. Unfortunately, GreenMeat and his men won't be out of danger by any stretch, and will be driving lightly armored or unarmored vehicles through areas thick with ambushes.

We do not want our soldiers and especially not our valued readers getting shot and killed because they don't have the trauma inserts they need! To that end Lowtax and I have decided to hold a fundraiser for GreenMeat and anyone else in his platoon who would like to participate.

The reason we're trying to raise money for these fine folks is the cost of the SAPI plates. They are extremely expensive - as much as 500 dollars a piece - and each man needs two of these plates (front and back). With 20 people we could be talking as much as $20,000. I have sent an e-mail to a supplier to try to get donations or wholesale rates but there is probably not much of a chance they will do that. In the meantime it's up to our forum goers and the readers of Something Awful to armor up these soldiers! Every dime will go towards buying these trauma plates. If we raise enough to buy them all, the excess will go to purchase care-package items for them.

Many of you, including me, may not be too keen on the war in Iraq. Don't let petty politics stand in the way of your human empathy for your fellow goon and your fellow American. In case you still don't want to send in money, keep in mind we're going to repeatedly nag you about this like National Public Radio until our goal is met! Besides, buying armor plates for some guys who are going to get shot at it is so much cooler than a freaking tote bag!

Donate via paypal to armor-donation@somethingawful.com and keep watching this post throughout the day for updates on the amount of money we have raised.

Saddam: The Next 20 Years 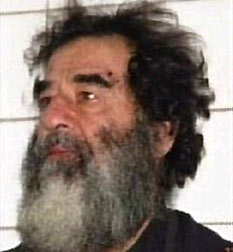 Hot stuff, comin' through!Unless you live under some sort of gigantic magical turtle you probably know by now that Saddam Hussein has been captured by the US military. I'm a big proponent of prison being used for rehabilitation whenever possible and I think Saddam is a prime candidate for being turned into a productive and non-mass-murdering member of society. I mean just look at him, he's halfway there already. He's so haggard and weak that he's already made the transition from evil dictator to strung-out junkie homeless guy. Shave him, put some clean clothes on him, and maybe introduce him to our Lord and Savior Jesus Christ and the guy stands a good chance of doing a 180 and putting the past behind him. Yeah, I admit, his past may be a bit more sordid than usual, but everyone deserves a second chance and I don't think Saddam should be an exception.

Let's just assume that the harsh world court in cloud city convicts Saddam to 25 years of hard labor in Sing Sing. I don't know much about Sing Sing, but any prison with a name that gay has got to be pretty hardcore. It's the prison equivalent of the gigantic murderous mafia thug named "Tiny" or "Sunshine".

Saddam gets shipped off to Sing Sing to serve his sentence, but he turns out to be such an honest and hardworking guy that he gets paroled after only eight years for good behavior. With a few dollars in his pocket Saddam is put out on the streets to make a new name for himself in the world. Now, it's time for Saddam's good old fashioned entrepreneurial spirit and work ethic to take over! Saddam, if you're reading this; print out these suggestions and place them in a metal cylinder. Insert the cylinder deep into your rectum and when you are released from prison remove it, open it, and get to work on the new you! Think of it as a delightful combination of time capsule, self-help book, and suppository.

Suggestion One: A Fresh Start 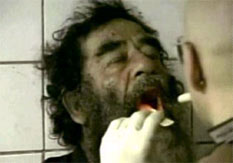 Saddam's molars are concealing the dreaded WMD gingavitis.Remember all those people you had murdered to advance your political career, to silence opponents, or just for your amusement? How about all those awful wars you started but could never win? Saddam, if you answered "yes" then you're already off to a bad start. The first step to rehabilitation for someone like you is to forget your past. That means no moments where you wistfully recall the sound of someone's ribs cracking while your secret police beat them with hoses full of rocks. More importantly it means you can't rely on the "old you" to make a career. You could probably make high six figures doing lectures or writing books, but you need to forget about Saddam Hussein and lose your identity in Keith Hussein or Saddam Goldstein.

Changing your name is a good first step on the road to an original Saddam, but there are a number of things you can do to create a new and real identity for yourself. A different hair color, some wild new scars, or even white power tattoos can help distance you from your unfortunate predecessor.

Since you can't rely on your infamous reputation to allow you to coast through life, you're going to have to find a job the hard way Saddam. That doesn't mean that you have to cast off every single thing you know. Some of those skills you learned by being a revolutionary and a dictator could come in handy in an industrial or office environment. For example, if you were applying for a job at a factory that makes mop handles you could include the following items on your resume:

If a coworker's hand becomes jammed in machinery, I know exactly what molar of acid to use to burn through their wrist and prevent them from being sucked into the machine.

If work area becomes infested with apes or human squatters I can fumigate them using an old family recipe to get rid of pests.

I can stare glassy-eyed and fire a gun repeatedly into the ceiling for hours on end if asked.

Those skills might not come in so handy in a more white-collar environment. Let's say you're applying for a position as a secretary at a law firm. Here are some great items to include on that resume: 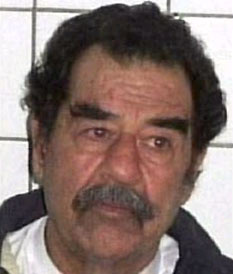 It looks like somebody needs a visit from the hug bug!

Excellent at keeping detailed and thorough records of things that might not even exist.

Have been involved in several major court cases.

Great at working with others and dealing with clients, even if the clients require "special treatment".

Wonderful personality and proactive attitude in the office will be an asset to all employees. First on the agenda is replacing staff room with rape room. I find I do my best thinking in the rape room.

With a strong resume and a few recommendations from staff members at the correctional facility you bribed with money from your Swiss accounts you should have no problem getting a new job. With that go-getter attitude of yours I'm sure you will be rising through the ranks in no time.

You've got a new outlook on life, a new identity, and a great new job, but what you need to put the finishing touches on that productive life of yours is a place to settle down. I know you may not believe in the American Dream now, but after spending eight years in a 10x10 room with no window you're going to think a picket fence is the best thing since sliced Iranian torso. A big part of the whole settling down thing is finding a nice woman to start a family with.

A traditional guy like you is probably looking for a nice lady who is willing to raise your children. I would suggest settling in the Midwest and searching for a widow or divorcee in her late forties. I suggest the sort of faded but still bright beauty that could really take a shine to a spry elderly man such as yourself. Imagine the stories you could share around the dinner table! Keep in mind if you want to have a couple of new children to replace the ones that broke under all those bullets back in your previous life you need to marry a girl young enough to conceive. You may have to resort to fertility treatments, which is fine, but don't be surprised when Martha Hussein gives birth to the Hussein Septuplets.

Saddam Hussein, we have laughed together, cried together, and a piece of all of us died together when we saw you on TV looking like five miles of bad rogue leader and getting the once over like a show pony. We'll miss you in much the same way we miss that scab on our elbow we just can't leave alone. Godspeed my friend!

Dr. David Thorpe has once again bestowed his limitless wisdom upon us in the form of a brand new and must-read Your Band Sucks. This installment he goes after Jack Johnson and John Mayer. 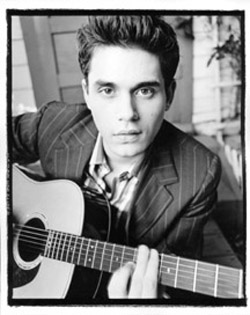 I simply refuse to accept that people’s standards of rock music have spiraled into such a deep abyss that they’re willing to accept Jack Johnson. However, the popularity of John Mayer is even more bewildering. The man is such an unmitigated pussy that he makes his mentor, the insufferable Dave Matthews, look like Lemmy from Motorhead. The fact that anyone could seriously sing a song called “Your Body is a Wonderland” in front of actual human beings without getting laughed off the stage is vein-poppingly infuriating.

I suggest you read this right away. There will be a test on it after the bell.