She died this morning. She lasted exactly one year and 24 days, just as she was made to.

The chimps had developed human emotions. And buck teeth. 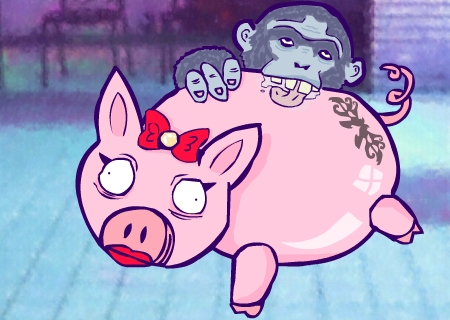 Baby steps. That's how science moved forward. In 1995, the project consisted of one tiny lab, one professor, 3 grad students, $24,000 in grant money, and one severely abused Rhesus monkey. Most people didn't expect the project to produce results. Half of them didn't expect it to last six months. But it did.

Against all odds, they continued to secure funding. Progress was slow at first. The technology to make primates feel human emotion for no good reason simply didn't exist.

1997. A landmark year in the history of emotion. The Rhesus monkey was euthanized and replaced with over two dozen chimps. Scottish scientist Ian Wilmut was able to successfully clone a mammal, opening the door for a myriad of new technologies that would benefit the team.

Additionally, it was the year that Radiohead released OK Computer, an album so perfect that it is impossible not to cry at the absolute beauty of it. Initial results indicated that, when combined with excessive doses of hormones, it was over 14 times as successful as its predecessor, The Bends, at evoking responses from the captive primates. They never tried it with Pablo Honey because let's face it that album was sort of craphouse.

In late 1999, increasing political pressure from animal rights activists almost caused the project to lose its funding. They would not be satisfied until the test subjects were provided with certain amenities. Specifically, a means of gratifying their sexual desire and aggression. Unfortunately, feminist lobbyists were also putting pressure on the researchers. Using a female chimp to satisfy a lab full of males was tantamount to slavery and prostitution. To appease both parties, the scientists hit upon the idea of bringing in an animal (properly desensitized of course) that the chimps could hump away at all day long. They decided to use cloned pigs because they could create a creature to their exact specifications: placid and unfeeling. 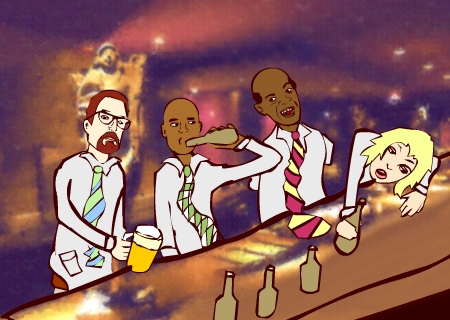 Scene: it is morning. Four brilliant young minds enter their lab space to begin another day of exploration and discovery. These men carry the hopes and dreams of man- and chimpkind alike on their back, the entire primate kingdom behind them, rooting for them to bridge the gap between their species.

Art Gass, a bald headed man raised in Boston, is eating breakfast and calculating long equations in his head. Everyday he has the same thing on his plate: a grilled cheese sandwich with a smiley face of ketchup squirted on top. He delicately divides the sandwich into 16 equal pieces as his eyebrows dance to the mathematics bouncing around his brain.

Behind him the artistically inclined Leonard Crumb, guarding the pot of coffee while he nurses his third cup. It is his first day back at the lab in almost a week, when he left early after getting a test tube stuck on his nose while clowning with the rest of the team as they indulged in their Wednesday afternoon Pizza Rolls Party.

Lester Spit, a good ole countryboy, and Swiss Keykrohl, the Scandanavian wunderbrain, are sharing a box of donuts, each stifling laughter and making subtle jabs at the other's failure to zip up their fly.

It was Leonard Crumb who came up with the idea of inserting beaver hormones into chimpanzees to accelerate their emotional development. He was fond of referring to them in his Xanga as "the most pensive of all God's creatures." While the treatment produced no noticeable behavioral effects, it did cause the next generation of test subjects to grow enormous front teeth

A painful part of growing up is the process of having your teeth grow in, then fall out and then grow in again. The teeth of a beaver never stop growing, and that was doubly true for these artificially over-evolved chimps, whose front teeth began to swell at the onset of puberty like those miniature t-shirts they give you in Hawaii that, when wet, turn into colorful beach towels. Their pain was further exacerbated by the simple scientific fact that new teeth crave material to sink into. The desire these poor beasts experienced could have inspired great simian poetry had their altered genes afforded them the requisite linguistic and motor skills.

The scientists were oblivious. They were not nurturers or babysitters, they were intellectuals. Their minds were too involved in higher things to deal with stuff like comforting a weeping bucktoothed monkey, or to dress properly. They never realized that the chimps were beginning to bite ferociously on anything they could, chomping on their surroundings like crazed beasts.

Their pen was enclosed by a wire fencing that was just perfect for chewing. It wasn't long before one of the chimps took notice of it. Within minutes the whole crew of chimps was climbing all over the fencing, rapturously gnawing through the wire like it was nothing. Soon enough it was all chewed up, the chimps left nothing but small threads of copper and plastic on the ground. 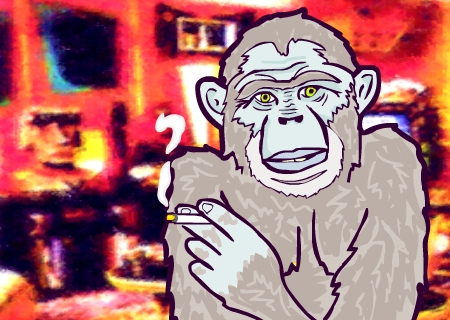 Their cage was gone. Their teeth were drawing them towards a forest of undisturbed pine trees three hundred yards away, a place full of chewy, delicious wood and all sorts of wild game to mack on. No more must they sit in their rec room and play mercy games with each other; no, they were free to gallop through the woods, like Goddess intended.

And so they did.

You've been a great audience!

Try the dirt it's delicious! Don't forget to tip your dirt if you liked the service! Goodnight folks.