Come into my office with me, rookie, have yourself a seat. Do you mind me smoking this cigar, or my hideous suspenders and comically gruff disposition? Good. I like you. Most of the shitbirds that come straight out of the academy are either asskissers looking to advance in rank while doing as little investigative work as possible or nervous kids too soft to solve the case of "what have I gotten myself into?"

But not you. You're real police, I can tell just by looking at you. Well, by looking at your file too. Why would someone who scored at the top of his class in every category specifically request to be stationed at a hellhole like this? I'm thinking it's the challenge inherent in working cases that couldn't be solved by local investigators, the freedom provided by a department that transcends jurisdiction, or maybe it's the chance to roll up your sleeves and do some good for your fellow man and all that happy bullshit. Whatever the reason, I'm glad to have you. Real police are hard to come by, especially here.

I figure a smart guy like you can work alone, so let's just get right to it, eh? You see that mountain of manilla folders on my desk, just out of reach of my stubby T-Rex arms? Those are the cases that just got dumped on us today. You should've seen yesterday's pile. Go ahead, rookie, peruse them and pick your favorite.

Oh, and if you find a hoagie in there, let me know. I can't even think straight without my morning hoagie in me.

Summary - This is a messy one. The victim's body was so brutally assaulted that we were unable to determine its sex, forcing us to tag our unidentified vic as Goomba Doe.

Victim was found crushed to death in a Mushroom Kingdom public park late in the afternoon. The body was discovered by a passing cumulous cloud, who was unable to provide any useful information as he did not witness the murder occur. No evidence of self-defense was found, indicating that our perp got the jump on Goomba Doe, possibly ambushing him from atop a nearby floating question mark block.

Crime Scene Photo 2AAutopsy confirms the cause of death as massive blunt force trauma to the head, which caused the victim's entire body to compact as its insides were forced downward and expelled through the anus, which exploded under the tremendous pressure. The impact wounds indicated one extremely violent blow as opposed to several strikes, which matched up to the evidence suggesting no struggle occurred.

Given the lack of an exoskeleton in Goombas and the commonly known fact that a mere bonk on the head from a nerf football is enough to cause irrepairable brain damage, our perp is very likely a savage individual who had a grudge against the victim or was on some sort of narcotics-induced rage. Traces of a hallucinogenic (and non-sentient) mushroom on a nearby floating platform seem to support the latter, but there are alternative theories.

Speculation time. Consider the recent string of similar Goomba murders in nearby areas. Is it possible we have a racist serial killer on our hands? Was our Goomba Doe mixed up in the same small-time criminal organization that the other victims were part of (a group of thugs who go by the name Koopa Troop)? Does our perp have some sort of grudge against these guys? Admittedly, this is all speculation with no real proof. Our case could be a confined incident in which a druggie simply lost his cool, but my gut tells me there's something bigger going on.

Anyway, back to the facts. I'm sure you're asking yourself why I haven't addressed the issue of the murder weapon yet. You're not going to believe this.

Forensics was able to make out a boot imprint in the mess of grey matter and ruptured muscle fiber that we believe was once Goomba Doe's forehead. That's right, our killer stomped on the poor mope. Embedded within the imprint were trace amounts of feces from varying origins and a rare fiber found in a brand of tape specifically suited for use on water pipes. A mold was taken of the boot imprint, and after comparing the sole pattern with several databases we were able to confirm that our perp was wearing a rather common brand of industrial waterproof boots. In all likelihood our perp's a plumber of some sort.

By doing some legwork, I gathered three statements from witnesses who saw a strange man wearing thick boots in the area on the afternoon of the murder. Their descriptions matched up perfectly to a certain extent (a portly Italian man, mustachioed with blue overalls and a red undershirt and cap), but their accounts of his height varied from a mere three feet tall to well over six feet. It just doesn't add up. How can a man be three feet tall one minute, and six feet tall the next?

It should be noted that several scorch marks from some sort of flower-based projectile were found near the body, but do not appear to be directly related to Goomba Doe's death. Also, on a nearby ledge overlooking a bottomless pit an upturned turtle shell was found with no trace of the turtle itself. This is currently being handled as a missing person/possible suicide case, but my gut's telling me that ties into our plumber somehow.

I've simply run out of leads at this point. It's like this guy just appeared out of thin air, stomped a Goomba to death, and continued on his way without looking back. Good luck to whomever picks this case up. Knowing this sick bastard is still out there running loose is bad enough, but even worse is the shame in knowing that he's out there because I couldn't solve this myself.

How did I know you'd go right for a murder? I've got confidence in you, kid, but not that much, not right out of the gate. Why don't you dig out something a little easier?

Summary - The complainant (Dwayne Wade of the Miami Heat) was engaged in a professional basketball game against the Phoenix Suns. As Wade advanced the ball across half-court, he attempted to "crossover" dribble the ball, at which point a player on the Phoenix Suns by the name of Steve Nash allegedly lunged forward and stole the ball from Wade in plain sight of the nineteen thousand fans in attendance. Wade claims that Nash did not ask to borrow the ball or offer anything in exchange, but simply plucked it away as though it were his. 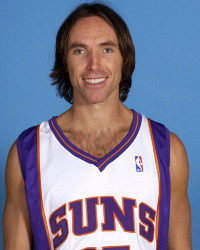 Steve Nash: MVP or MV-jerk?Wade was visibly shaken when he brought this case to us, and although the athlete makes millions of dollars a year and the ball in question was virtually worthless, he insists that Nash be prosecuted for his blatant flaunting of the laws that govern our society. The following is an excerpt from my interview with the complainant:

"I used to think we as humans were above the wild animals we share this planet with, that we were compassionate and kind by nature. Then I saw Steve Nash's eyes that day, and they were horribly cold and uncaring, devoid of all feeling, and also pointing in slightly different directions. How can a man fall so far as to commit the horrible deed he did that night without a moment's hesitation or remorse? At what point did his soul become so black, and what hope do the rest of us have? I was a religious man a mere week ago, but I now know that there is no God."

Open and shut case, right? Not quite. See, the game in question took place in Phoenix, so finding a fan to come forward and testify against a hometown player proved to be an impossible feat. As was expected, the higher-ups at the NBA wanted to protect the image of their sport so no players or officials were willing to cooperate with the investigation.

Forensics was able to pull partial fingerprints which verified Steve Nash had handled the ball, but they also found prints from every single player and official involved in the game that night. As a result, I am left with no physical evidence, no witnesses, and no way to prove conclusively what did or did not happen that night. All that's left is the word of Wade versus the word of Nash, which wouldn't even guarantee a win in a civil suit.

This case? You want *this* case? I said grab something easier, not... aw hell. I'm not going to sit here and bust your chops. If you think you can solve this headscratcher, you go right ahead. Do me proud and I'll let you have access to the real good stuff for your next assignment.