I Cut the 'Big Five' Tech Giants From My Life. Now I Talk to My Grandpa's Ghost on Orkut.

Two weeks ago I began my project to block all of my devices from accessing data and services from Apple, Microsoft, Amazon, Google, and Facebook. It was hard at first. Apps would not load on my phone, websites I use every day were blocked, and social media was a complete no-go zone. I could not even use my email. At first, I filled my life with my family. I hung out with them more, did projects with my children, and even worked out and pecked away at my novel. But that void was still there. That need for social media. And I found out the one website that still worked was Orkut.

I'd never used it before, but I remembered my grandpa saying he had an account there almost 15 years ago. It supposedly went defunct in 2014, but I managed to find a URL to the site that still worked. Then I found my grandpa still posting on Orkut. More than a dozen years after he died.

"Is this my email? Is this still my email?" He posted when I Orked him (which is like friending). I scrolled through his posts and found thousands of posts that were made recently, but seemed fixated on the time just before he died.

"John Kerry is a traitor. He came back from Vietnam and pulled a Hanoi Jane." He wrote in one lengthy post about why John Kerry could never be president. "I put in my hotmails and that isn't working."

"Grandpa, I thought you died," I messaged him.

"The United States found chemical weapons in Iraq," he replied.

He did not remember my husband's name or the names of my children, but somehow the one modern thing he did know about was Qanon. 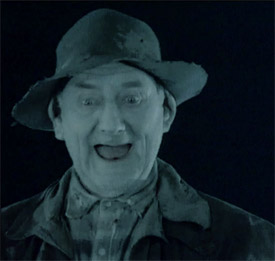 "John Kerry helped Hillary Clinton sell uranium to the Russians in order to buy children from Haiti. Look it up," he told me. I explained to him that I could not look it up because I was blocking Google. "Good. Google censors the search results to keep John Kerry's crimes from coming up. Search John Kerry child slaves. Nothing. Coincidence? But now search Orkut and you will find 1 million results."

He was right. Orkut was filled with theories about John Kerry that were somehow related to Qanon. The more I searched through the results like "John Kerry moves a train of children around the country" and "Video footage of John Kerry feeding a baby to a horse" I realized that all of the posters on this version of Orkut were ghosts. Most of them were grandpas and grandpas with a smattering of teenagers that had died doing Jackass-style stunts.

Orkut was the ghost realm lurking just out of view of the eyes of the living and it was infested with anti-immigrant old people and white male teenagers. There were a number of them that were still angry about Lara Croft Tomb Raider being a woman. "More PC culture. I remember when Lara Croft was a man called Indiana Jones," wrote one critic in one of thousands of posts on the subject.

When I tried to talk to my grandpa and others on Orkut about current events, they treated me like I was playing a game. "2019? Sure. The EMP is happening in 2008," wrote my grandpa. "Look up High Frequency Active Auroral Research Program."

I was amazed. I would never have found this strange world if I had not blocked the "Big Five." I will be staying online thanks to Orkut.

Because THEY don't want us to know the truth.