That Space Turd Was Not An Alien Probe

Lt. Col. AJ Tucker is reporting unofficially for the NASA Young Astronauts Program. This program, like most NASA programs other than launching remote controlled cars into space deserts, has been discontinued. Astronaut Tucker is funding these outreach messages to grade schools throughout America with money raised from a gofundme he claimed was for a graphic novel based on his experiences using the space toilet and eating freeze dried garbage biscuits as an astronaut. He has "called an audible" on that project and used most of that money to buy and bury three shipping containers in Montana which he now uses as his recording studio/Mars Mission Simulator. 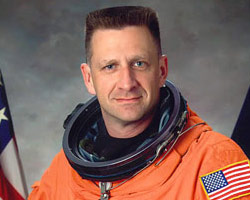 Greetings faithful Young Astronauts. This is AJ Tucker coming to you from the bunker with all the space news THEY don't want you to hear. I know it has been many moons since I have sent out a data squirt, but now is the time to receive. The science press and some idiot astronomers, which I have mentioned before are literal subhuman goblins, has been drooling about a rock flying past earth. It's a complete diaper load.

First of all what is the one thing that happens more often than anything else in space? Well, nothing, actually. Nothing happens. It is the most boring location in the universe. Space is where you go when you don't want to see or do anything good.
But aside from nothing, which is the absence of things happening, the number one thing that happens in space is rocks flying past the freakin' earth. Number one. Happens all the time. And this rock didn't even get that close. Oh, no, they were all excited about it though because they believe it came from outside our solar system.
Of course, the first freakin' rock they see fly past us from outside our solar system and they immediately come up with theories about how it's an alien probe. Look at this thing: 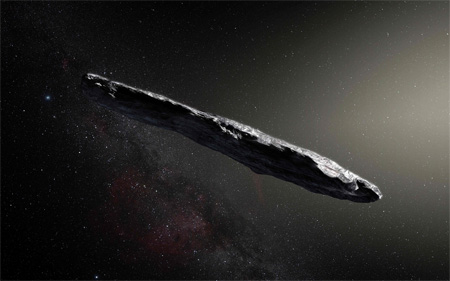 It's called Oumuamua (don't look at me about the name) and it looks exactly like a freakin' crap. So the galaxy crapped out a rock and sent it flying through our solar system and these loopy nerds said, "Yep, here it is, space aliens. Finally."

Loyal readers will know by now that the number one thing you can guarantee this is not is space aliens. Why? Because it is never space aliens. This is Tucker's #1 Law of Spacial Relative Coolness in action. Remember, in space, nothing is cool. Not even relatively cool. We don't do anything cool out there anymore, we don't see anything cool, there's never aliens, and our best hope for something cool is some nerd who gets high on the Joe Rogan show. Why won't you come on my show, Elon? Afraid of the truth?

To be fair to the subhuman goblins looking through telescopes, if there were aliens, sending probes to dipshit solar systems like ours seems like exactly the sort of thing alien NASA would do. They would launch a probe that takes 500 years to get anywhere and then defund the probe monitoring team and leave interpreting the data up to some alien guy living in his bunker in space Montana. And in the end, guess what the probe found? A planet so messed up that everything on the planet will be dead in 50 years.

Which brings me to my second point: Q is sending us messages from inside the government that the storm is coming. Where we go 1 we go all, but definitely not to freakin' Mars again. We're never going there. More on Q and the truth about the deep state probe only agenda in my next transmission.

Onward to Mars! Tucker out!