The Conversation That No One Wants To Have With Their Parents

Hey, kiddo. Mind if we come in? Your mom and I would like to have a little chat with you. It's... an announcement? No, I suppose that's not the right word for it.

Look, we've been talking about some things for a while now. None of it is your fault. You have to believe that. This is all stuff that your mom and I needed to work out. Now that we've made some decisions that will affect your life, you need to hear about them.

We're done with the restrictive world of clothes. Have been for a long time. Too many individual garments, too many trends to keep up with. That said, we aren't nudists. We started exploring our options and over the months it became increasingly clear that coveralls are the way to go.

Hey, no, don't cry. This isn't your fault, remember? Maybe your mom wants to pitch in... no? Gee, thanks, Barbara.

Phew. Okay, let's all calm down here. Things are getting a little too emotional. Maybe it would help if I showed you the binder. 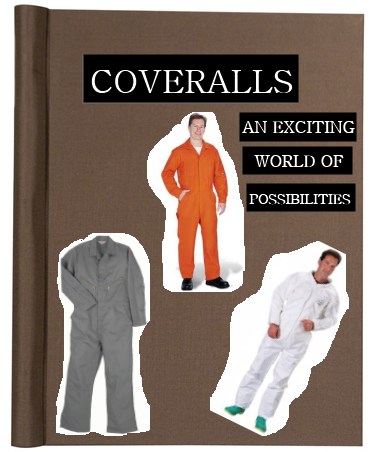 These are some of the coveralls that got us especially excited, moreso than regular coveralls. Give them a look. See if they spark your imagination like they did ours. There's no pressure, but we'd like it very much if you tried the coverall thing with us. We'll all face it together, as a family.

I know, it's a big change. This is all very sudden. Hold on to that binder, take all the time you want to think things over. Remember that if you have any questions you can always come to us.

We don't want to overwhelm you, but there's more.

We're thinking about quitting our jobs. We have a business idea that we simply can't pass up. Something that will require our full attention.

It's a website. I'm learning RealPlayer right now, and your mom is looking into getting us a Hotmail account. It's called Yourwebsiteideaisnogood.biz, and it's like nothing else that's out there. People will come to us with their website ideas and we will tell them that their ideas are no good.

You look confused. It's actually pretty simple. Let's say that a client wants to launch a social network website where visitors vote on stock images of taquitos, and that this website will be aimed at high powered business professionals. Well, obviously that idea is... actually pretty good. That's not a bad idea at all. But for the sake of this example, we tell them that their idea is no good. They save a ton of money that they would have invested in their idea, and are happy to hand over a nominal fee.

We were thinking that when the site launches you could help us start a viral campaign. You know, pass the link along to all your friends. Again, no pressure. Just something to think about.

Remember Buddy, the fish you had a few years ago? We told you that Buddy went to live in Sea World. That wasn't exactly the truth.

Buddy went to law school. Things... didn't go well. He was expelled. Borrowed a lot of money from some bad people. Last year he started leaving notes for you under your pillow.

We're not sure how he's been getting into the house. We changed the locks, made sure all the windows were secure. Buddy's got some secret way in that we just can't figure out.

The notes started out normal enough. Telling you how much he missed you, asking you not to be ashamed of him. Obviously you didn't get these notes, as your mother collected them every morning while you ate breakfast. Soon the notes turned, well, weird. Lashing out at you for ignoring him. Describing things he was leaving in your ear as you slept. Threatening violence.

One was simply a photograph, a gun to your sleeping head, Buddy dressed in little fish clothes identical to yours, a wig on his head matching your dirty blonde locks.

Last night's note was especially tough. Son, it seems that Buddy has been diagnosed with a rare heart disorder. He needs a transplant. You're the only match.

Again, no rush. Take your time to think things through. We'll support your decision, but remember that Buddy would do this for you.