The BBC is reporting that some science class all-stars in Texas have cloned the first pet, a cat named "CopyCat". Get it? That's a pretty clever name, but my cousin named one of his cats "Maximum Overdrive", which I think is far superior. And since when is the BBC the best source of news from Texas? Here's a quote: 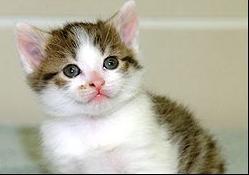 The cloned kitten in question, CopyCat (CC for short). Another clone with severe birth defects was named BCC. That's a little joke for you email fans out there, thanks for reading!

CopyCat is the only surviving animal of 87 kitten embryos created by cloning… It will have to improve if pet cloning is to become a reality.

According to the Wall Street Journal, the cloning experiments were funded by an 81-year-old financier called John Sperling, who wants to charge wealthy pet owners to clone their animals.

What do they do with the 86 dead kitten embryos that didn't make it? My guess is that they ground them up into cat food and fed them to CopyCat. You know, as a recycling program of sorts. After all, with a low success rate like that you've got to keep things efficient if you expect to make a profit!

So a senile old man wants to charge rich people thousands of dollars to bring back their beloved poodles and Sheba-slurping cats. Uh huh. Sure, he'll probably find people dumb and wealthy enough to pay for this, but with thousands of pets available for free in animal shelters and garbage cans around the globe, why bother? Not even Bob Barker's insane crusade for canine and feline genital mutilation has helped matters much. There's still more than enough fleabags to go around!

There are a whole lot of other issues the article neglects to touch upon, like the chance that the cloned animal may act nothing like the original. Soozy The Poodle might have been a perfectly trained, well-mannered beast, but Soozy 2 may spend most of its time chewing on her own leg, projectile vomiting into corners, and marking furniture movers with her scent. Also, wouldn't it be creepy if the same dog was kept in the family for generations?

Dad: Here son, a new puppy!
Kid: But I wanted a Golden Retriever!
Dad: Blow that, spermspawn, this is Fido 5! Your grandfather had this same dog! I had this same dog three times, and they were all great except Fido 3. I threw him into a lawn mower.
Kid: But dad I…
Dad: Shut up and be grateful! It cost me $5000 to clone this mangy mutt! I could have spent that money on a non-fatass version of your mother! Now feed Fido from the free bag of strange-smelling dog food they gave me! 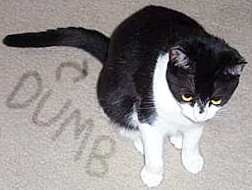 And they say I can't write snappy dialogue!

Plus, no matter how many times you cloned Lowtax's cat, Spaz, it would still be dumb, lazy, and ugly.

Sure, I miss some of my old pets, but not enough to bring them back to life. Besides, I don't want to relive the past. Mostly because that would involve being shook down for lunch money, thrown into a garbage can, and wheeled about the school.

Hey, hold on a second here, I just thought of one group of people that'll really benefit from pet cloning: bestiality fans. Now they can clone, like, the hottest dog in the world and not have to worry if they accidentally kill it from overuse since they can just get another. I don't really know much about bestiality, but I'm assuming the hottest animals are dogs, cats, cows, sheep, and horses. They've already cloned sheep, but I'm not sure how useful that is since all sheep look the same to me anyway. I'm pretty sure nobody wants to screw goldfish. And I'm really sure nobody wants to sex up Sea Monkeys, since they're so small. Except maybe people who hump water. There must be people with a water-banging fetish, right? I wonder what the sexiest water is? Bottled water? Lake Ontario? Does having a fish watch the action make the experience that much better?

Beats me! But I would think that pounding away on a fish tank filled with Sea Monkeys probably isn't the smartest thing one can do. What if they swim… uhh… "upstream" and start founding colonies in your intestines? If you look at the pictures on the front of the Sea Monkeys box, they get to be really big once they’re fully-grown. Although I’m still not sure if humans knit the clothes and make the king and queen crowns for the Sea Monkey royalty or if they produce that themselves.

So I'm definitely against animal cloning, but human cloning is a whole different matter. Trying to impregnate liquid is fine by me, as long as they don't do it to anything I'm drinking. You've got to draw the line somewhere. Did any of this make sense?

The Academy Award nominations were announced this week, and unlike Entertainment Weekly we have an intelligent, charming, and always witty journalist to provide the most insightful Oscar commentary on the World Wide Web. Want to know which movie is going home with the Best Picture Oscar? Well we… we… what? Oh wait, I'm sorry, the "intelligent journalist" we hired to write Something Awful's Oscar Preview got arrested for sexually propositioning a homeless man who was carrying a sign that read "Best Farts, 50 Cents." So instead you'll have to settle for A Nerd in His Shoe: 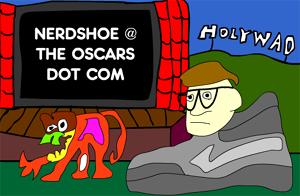 That's right, Nerdshoe is back with an Oscar Preview Flash… thing. And he's just as… well… whatever he is as always! I'm supposed to say, "enjoy", but you probably won't.