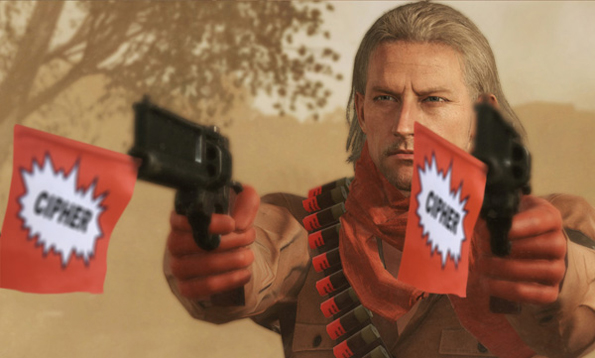 MILLER: Boss, you've been shot! Being shot will deplete your [LIFE]. Your [LIFE] won't recover if you keep getting hit - try hiding behind some cover. Remember, once your [LIFE] runs out, it's game over.
OCELOT: For once, I agree with Miller. Be careful out there, Boss. Always keep an eye on your [LIFE]

OCELOT: Boss, during the day, it's bright. But at night, it's dark. As an experienced soldier, I'm sure you'll be able to make use of this.

SNAKE: Hey, you! Yeah, you, ya big bully!
METAL GEAR looks left and right, confused
SNAKE: Down here, oil breath!
METAL GEAR looks down, seeing SNAKE standing by its feet
SNAKE: How about you pick on someone your own size for a change, huh!?

HUEY: Snake, you can't go back in there! It's dangerous! Press the [ACTION] button to climb up small edges - but remember to keep an eye on your [AMMO COUNT].
SNAKE: Get off my back, Huey. I work alone.

MILLER: It must be CIPHER... the same people who destroyed our Mother Base nine years ago. We have to start again ... create a new Mother Base. Raise an army to fight CIPHER. They spat on us ... but we can become more than mutts. We can become ... Diamond Dogs.
SNAKE: [faint sound of Kiefer Sutherland being paid per word] OK

OCELOT: Boss, it doesn't look like that soldier speaks a word of English. You'll need to go capture a soldier with the [RUSSIAN INTERPRETER] skill. You can no longer speak Russian, probably because of the attack nine years ago in which a large piece of shrapnel pierced your skull and became lodged in your frontal cortex.
SNAKE: I don't have time for this.