Many proponents of Amtrak believe that the company's long-haul trips should continue to be subsidized without expecting Amtrak to make a profit. Besides, highways are subsidized and they don't turn a profit. Of course, the difference is that people are actually using our crappy freeways while nobody is using our crappy railroad. The government is basically subsidizing a faggy hobby for Asperger suffering railfans.

Those who want to sit in a train for 50 hours cross-country should be forced to shell out the couple grand it actually costs rather than make the rest of us pay for it. Those of us who want to actually get where we're headed will drive, fly, bus, or catapult ourselves to our final destination.

Railfans will tell you that taking a train cross country is the experience of a lifetime. Unless that experience includes non-stop fucking (with girls), I'm not interested. Trains aren't cruise ships. They were useful for continental journeys when people looked like Yosemite Sam and sounded like Foghorn Leghorn. Not so much anymore.

According to Amtrak Delays, the Sunset Limited to New Orleans was delayed on average three and a half hours over the past three weeks. Imagine if it still had to go all the way to Florida! The Coast Starlight, where it's not unheard of to be delayed three to five hours, doesn't fare much better. These are schedules that are already padded with lots of extra time to deal with bullshit delays such as railfans hopping on the cab and humping the glass. Planes have since eclipsed trains when it comes to long-distance passenger travel for reasons like this. Deal with it. 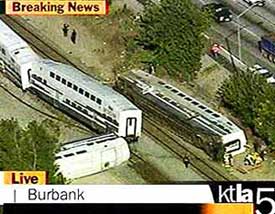 Go Metro.The future of rail travel in the United States is regional commuter trains and light rail, where driving is a pain in the ass and flying is overkill. In Southern California the Metrolink system does reasonably well when it's not crashing into pickup trucks. Ironically, Los Angeles once had one of the most robust passenger rail networks in the world before Judge Doom and his Cloverleaf corporation conspired to shut down the trains and replace them with buses. Efforts like the Expo line aren't so much expansions as they are restorations of a system Southern Californians once enjoyed.

Improving and expanding systems like this one and routes like the Pacific Surfliner and Northeast Corridor is what we should be focusing on, not ensuring that pointless intercity routes survive so railnuts can get their rocks off every time the Southwest Chief rolls through Fullerton two hours behind schedule.

Here are some things politicians and the Chinese immigrants that I assume still build our railroads need to do to make rail a feasible alternative to driving, flying, and horseback, at least on the west coast, also known as the best coast.

Build a high-speed rail line from Los Angeles to Las Vegas. Hookers and blackjack will scare away railfans for a fast, smooth and awkwardness-free journey.

Build a high-speed rail line from Los Angeles to the Bay Area. Human interaction will scare away railfans for a fast, smooth and awkwardness-free journey.

Extend the Los Angeles Metro Green Line west to LAX and east to Metrolink. They can't figure out how to extend the Green Line to, oh nothing, just the busiest airport on the west coast, but can find the funds to expand the Gold Line into East LA. Just what we needed, another Tijuana on wheels like the Blue Line.

Extend the Metro Purple Line to Santa Monica via Wilshire Blvd. Tar pits, methane gas explosions and woolly mammoth skeletons be damned. They could call it the Holy Shit Methane Gas Explosion Line. In any case, finish what you started Los Angeles.

Get over our fear of flying. Long-haul trips are pointless as long as freight companies own the lines. Maybe it would change if someone draws a political cartoon depicting the railroads as an octopus again and makes them all sad. Until that happens, the 40+ hour treks from coast to coast are a thing of the past.

Like most armchair transportation experts I have no idea how to accomplish any of these things, whether they should be accomplished, and if I know what I am talking about and instead choose to squawk incessantly until something good comes on TV. But if we manage to upgrade and expand our regional rail infrastructure throughout the country, the U.S. will finally have a proper rail system that our children's children will refuse to use.