Another Word for Evil 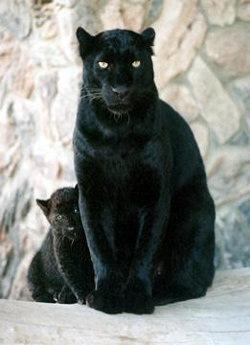 Black leopard and her cub. Evilest of the moms.I experienced my minor league epiphany while reading an article on the Internet that could be summarized as "people think black is bad." The article was going on and on about how society conditions us to view the color black as a negative. The theory goes that, racist or not, we assume the worst about anything black. Black people, black birds, and black holes are all victims of our anti-black prejudice.

I don't know if I agree with the article's premise. I wasn't even convinced after some fancy online test from Harvard flashed a bunch of words and pictures at me and declared that I hate black people.

I like black people. I like black cars. I like Darth Vader and night time and those vinyl pants hot chicks wear in action movies. I could go on forever. Paint it Black, one of the best Stones songs. Blackwater is my favorite mercenary company.

You get the picture. Black is just fine with me.

Regardless of what Harvard said, black wasn't my bad word. Maybe the article had a point in there somewhere. Maybe some other word or concept was the hook on which I hang all of my negative prejudices.

I searched my mental dictionary.

Colors were right out. I have mixed and complex feelings about every color other than aquamarine, which I have a longstanding rivalry with completely unrelated to any stereotypes. 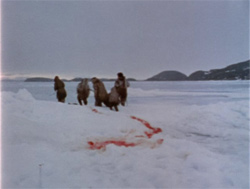 Good going, Inukshuk. We here in the civilized world just type /pizza.Political affiliations tend to be either too general or too specific. I don't dislike most Republicans, but I hate every single neocon. Neocons are demonstrably evil, so that word doesn't really work. The same goes for nationalities. My infamous hatred of Eskimos is based on the way they treat seals: they eat their eyes. Call me Mr. Biased, but that's one step away from eating souls and I think that qualifies as bad.

No, if I wanted a suitable "bad" adjective it had to be almost as universal as a color. I was wracking my brain and coming up with nothing until, as usual, the TV provided me with my answer.

Domino's Pizza, the second worst pizza franchise in the United States, was airing an advertisement for some grotesque version of a bread stick. It was covered in melted cheese and oozed oil like a strafed tanker truck. Purchasers of this delight were instructed by an excited voice to, "Try it with our ranch dipping sauce!"

The thought of bathing that sodden log of cheese-topped bread in ranch dressing was about as appetizing as spooning vomit off the floor of a gym shower with a Dr. Scholl's I pried off the underside of a medical waste bin. Just like that, I had it.