LoyalTV and a Tax Refund

LoyalTV is the America's Funniest Home Videos of commercials, where writers and a budget have been replaced with ramblings and close-ups. People just wander around their house shirtless making videos of themselves trying to describe why they like whatever they pulled off the shelf.

Not all the videos on the website are worth watching. There are eight videos about Arizona Ice Tea? Not a single person was at the grocery looking at those tall cans colored like a 1992 Taco Bell thinking hmm I should go home and hear some opinions first. Instead, they just bought it and decided it tastes like piss. That's the video we need. Where's the Arizona Ice Tea tastes like piss review?

So most are crappy, well, more than most, but these are my favorites.
Woman in bra talking about Degree deodorant.
Effect: I went and purchased a case of womens' deodorant after seeing this video. 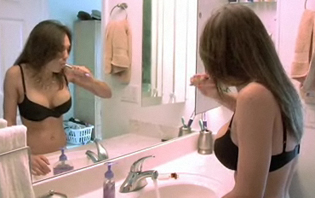 I never knew how much I loved toothpaste!

Woman in a bra rambling about how much she loves toothpaste.
Effect: Okay, everyone loves toothpaste, but her points on why toothpaste is great really strike a cord. I think this video has the power to convert non-toothpaste users with her powerful statements such as "it makes your breath fresh."

A demonstration of how to make an "Ice Bomb."
Effect: Kitchen gone, everything covered in ice.
Edit: This video was taken off-line a few hours after article went up. I apologize for any misunderstanding. -IG

A representative of the Anime Club at Mizzou discussing the merits and weekly activities of her college organization while a nearby bystander stares in disgust. On Saturday they are watching four anime movies back-to-back, free pizza.
Effect: Nope, anime still sucks.

Anyway, I hope this information helps you find a responsible place to put your money, and it better not be the bank. You should check out LoyalTV, I think you owe it to your dead dad.

Don't worry, the reviews on the site are trustworthy. No business would ever pay college kids to upload videos about certain products-- except those bastards at Arizona Ice Tea Headquarters. At least the word Loyal is in their name right next to TV. But, neither of those words have anything to do with the website. Actually you're supposed to read the name as Loyalty V. Which translates to Loyalty Five. Which obviously means the site is owned by someone who really likes Lenny Kravitz' 1998 album Five, and you know you can trust anyone earnest enough to state that they like Lenny Kravitz. Oh well, these tiny 30 second videos are just as trustworthy, if not more so, than real commercials.