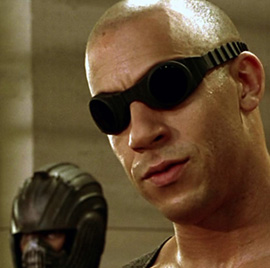 [Alien cremalisks swoop down through the ashy skies and scream as they blast cones of superheated magma breath on the surrounding colony. Tracers of anti-aircraft blasters harmlessly sputter through the air. Riddick watches the sight of a massive cremalisk incinerating a hyper truck. It explodes and shrapnel nearly decapitates Riddick.]

[He leaps into the air and pulls the cremalisk to the ground. Its neck snaps and its head flops lifeless onto the ground. Onlookers cheer Riddick. He puts his goggles on and walks away ignoring the cheers.] 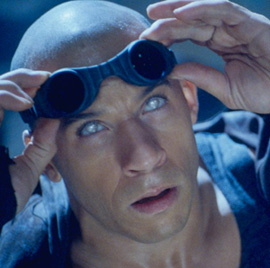 [Riddick stands in the smoky war bunker looking at the haggard troopers and the civilians. A stern and handsome woman approaches him.]

WOMAN: You did pretty good out there.

WOMAN: You know how to kill them.

WOMAN: You have to help us!

RIDDICK: Not my fight.

WOMAN: Please. You must! You saw what they did to the colony.

RIDDICK: Bad things happen all the time. Get used to it. Now if you'll excuse me [puts on goggles] I have a ship to catch.

[Riddick walks out of the bunker and into the ruins of the city.]