[Riddick looks at the glowing Machariel sword in his hand. He tests its weight. He spins it and flips it around and appears to know exactly how to use the giant sword.] 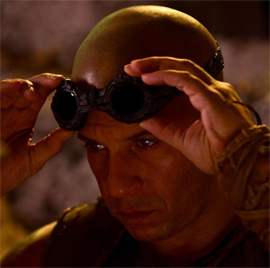 [Boglath, Devourer of Furya, grips Riddick by his throat, lifting him up off the ground. Smoke glows off Boglath's body. His faceless head tilts to one side and Riddick's face begins to appear on the surface as Boglath eats Riddick's life force.]

BOGLATH: Your hatred is sweet.

RIDDICK: Tell me how this tastes.

[Kicks a knife into Boglath's head.]

[Riddick flexes his double muscles. The Machariel Nephilim Guard swoop in around him. They are numberless. Riddick floats into the air. His eyes glowing. Lightning crackles around him. Int he cathedral windows planets are visible being smashed apart by the black beams of the Revelation Hammers.]