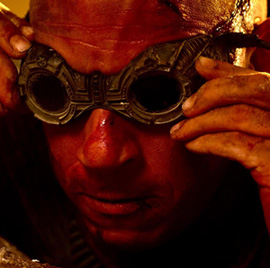 [Riddick eyes the bounty hunter, Reemes, with casual intensity. Like a lounging cobra. Although Riddick is restrained in a paralyzer harness it is Reemes who seems on the defensive with his posture.]

RIDDICK: Ghosted hunters with more bounties on their belt than your whole crew, Reemes.

REEMES: You're the one there and I'm the one here.

REEMES: [Leaning closer] I'm not afraid of you, Riddick.

[Riddick lashes out and head-butts Reemes, killing him instantly and brutally.]

RIDDICK: Now you're the one there and I'm here.

[Riddick easily breaks out of the paralyzer harness.]

[Reemes' crew is either dead or unconscious and Riddick sits behind the controls of his ship. He changes course from Stabitarrius IV to Furya.]

RIDDICK (V.O.): I never counted on getting involved up to my guts, but some debts have to be settled. Blood debts. Vacetti was counting on that to bring me back to Furya. I didn't want to disappoint him or all his blood. 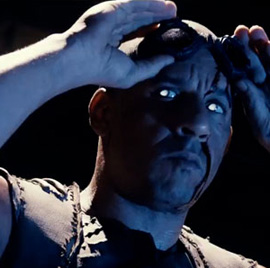 [Riddick kills several dozen resurrected Furyans leaving their bodies strewn across the space port. Vacetti's men retreat, but Riddick appears behind each, like an angry fart, and he snaps their necks. Soon, only Vacetti remains.]

RIDDICK: I've punched the bones out of bigger dicks than you.

VACETTI: You think I wanted to bring you here? Ha ha! They made me do it!