Subj: CHRISTMAS TIDINGS UPON YOU AND YOURS!!!!

HELLO!!!!!! i hope you are having a pleasant holiday season!!! myself I am making my way the old fashioned way as we did one or two winters when you were a young person... I am offering to set up old peoples lights and decorations for a handsome fee!!! in fact i have given up entirely on the soft sell because this neighborhood i'm in is so rich that i can just tell the old people "You Wish You Had My Christmas Lights Skills. Win The Future And Hire Me Now" and before you know it I'm on house number 4 for the year living high on the hog... and the house!!!! 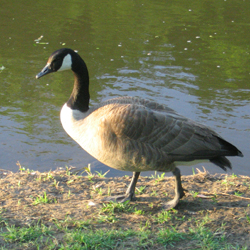 I have not had a great deal of trouble in this line of work historically, but this year is different because of the geese that seem to work and play in this neighborhood. They are the big canadian-style geese that growl and chase you and get protective when you come around and drive your truck onto the lawns of the houses around here. after my first 2 houses i made my first purchase with the new money that should help: i got a great deal on a retired battlebot to help fight the geese

before you panic or call someone let me assure you that this battlebot is completely safe to come in contact with for me and will only harm the geese and not harm me. it is not a living thing i have a giant remote control that is the size of a dictionary and i control its every move. it's also not the usual wedge style, it is better. it has a big leather belt on the side and it spins around whipping the belt at incredibly high speeds. this battlebot almost took the battle it was in by storm but fell prey to another bot with a giant flip-over arm on it and did not make it on tv. after retirement it was then outfitted with a lawnmower blade and made the county fair circuit in this county and even at one point entered a pig show on one day where the pig show fell on april fools day (did not win) it also could cut grass during that period 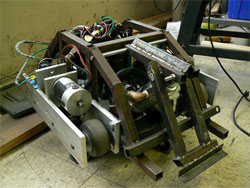 the blade has long since been removed but we have a pretty good system where when i hear the angry goose calls (the sign that they are coming) i get down the ladder real quick and get to the controls and start whipping the belt around chasing the geese that otherwise would chase me. it usually takes about 20 minutes of chasing the birds around yards up and down the street to make them fly off for good, and then i can get back to my work. once, the battlebot ran out of juice and i had to take my shirt off and whip it around in a circle over my head to disguise myself as the bot and scare the geese that way, it worked but it took a lot longer and was very cold on my torso

this thing is also very good at chasing teens away. i have chased teens 2 times with it but one of the times the teens lived at the house that i was hanging lights on and i honorably did not accept payment for that day's work because of the whipping of that teen's legs that my bot did.

all in all this is very good money for the work and you would be very smart to take up some side jobs like this in your town but you either need a young child or a battlebot to scare the birds off!!!!! GOODBY!!!!!!