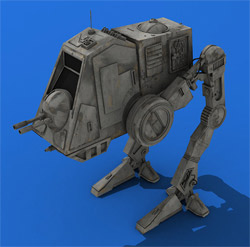 The AT-FT is based on the AT-PT and you can see idiots stomping around in both of them all over the place and they can't see to either side and they like to knock crap over and fall down chutes.Today is probably my worst day on the job since I was transferred here. I saw crap today that makes me so frigging mad I can't even artiggulate it. No amount of getting high or watching cartoons is going to let me forget what we found.

Alright, so, starting at the beginning, ever since I've been here people have been going missing. Not real often, but say maybe once or twice a month someone from IWS or one of the maintenance teams would just go out on an incident and then never report back. We'd look around and buzz them on the intercom and then eventually we'd give up.

It sounds callous, but you gotta remember this thing is like a giant city. I haven't even been to most levels and there are shopping malls and grocery stores and, like last week I read that on Level 23 they had a Miss Death Star competition at the Hydroponics Festival. So sometimes you figure some dude might just get fed up with the job and try to disappear off into the population or whatever. The guys that have been here longer than me say that it happens quite a bit and you just have to leave it to internal security to take care of them.

That's what we figured was happening to most of these people that were disappearing. Until today, that is. Petty Officer Bronco got a call from an IWS crew on Level 74 saying they found a bunch of our people. He tells them to hand it over to security, but they say no, that we have to send some people down to 74 to collect our guys.

Bronco picks me, Harley, Goober, and Dogbert to ride a freight lift down there with a cargo loader. He won't tell us what is going on. I heard this buddy of mine, Brightbull, was one of the guys they caught. Nice guy, fat with a big mustache and a laugh that would make everybody else laugh no matter what he was laughing about. Usually hooters.

He disappeared about three weeks ago owing me fifty credits, but I wasn't worried about the money. It was a lot for my paycheck, but I don't worry about that sort of thing as long as I've got enough to get by and send some home to my family.

Anyway, we get down there and head to where the IWS crew from 74 told us to meet them and it's a frigging zoo. There are people representing crews from all over the Death Star like it's some sort of worker's Olympics. Goober was the first one to notice that we all had something in common; we were all from the same quadrant of the ship.

The muster point was the main access hatch for Maintenance Shaft D, this big circulation shaft that curves all the way from pole to pole through every deck. There are eight of them total, four clustered around the central maintenance shaft and four out towards the surface. D is one of the interior shafts.

By the time I catch a whiff I already am guessing what happened. I've had to cross the retractable walkway that connects Maintenance Shaft D to the inner core a few times. When the door to Shaft D opens and I see the heaps of twisted bodies it all clicks together. The disappearances weren't people running away from their jobs, they were poor dudes that got caught by wind or just lost their footing on one of the retractable walkways and fell. 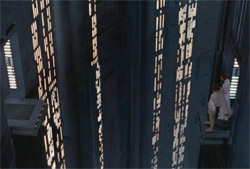 Safety last around here.What kind of frigging jerks designed this dump!? People are dying walking to their job on a spaceship? This is bullshit! I could see it happening in the jungle or something and they had to cross swinging bridges to get coconuts, or even on a spaceship like if an electrical conduit shorts out, but just walking to work? Someone had to design that walkway! It's total crap.

Those retractable walkways are made out of brushed metal, no traction, and they have no hand rails or anything. Plus they're like a foot wide.

Some of our guys were probably carrying 40 pound water pumps to a job on the interior when they got sucked down and fell. Or even worse, some of the walkway controls are on the other side of the door, so maybe someone walking past saw the bridge was extended and just thought someone left it that way accidentally and hit the retract button and holy crap I am so mad about this I can't even think straight.

I know I'm not supposed to get emotional in these sorts of things, but this is just too damn stupid. If I wasn't on a year contract I would quit and walk out right now. 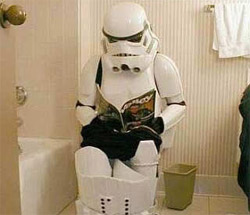 Hey,l thanks bro! Happy birthday!The stormtroopers have done it again. Total bog nightmare at their barracks.

I'm telling you, those guys are still using too many clones and the officers don't understand the sort of problems that causes with the septic. When one of those non-clones eats something weird, all of the clones see it and they start getting fussy unless they can all eat the same thing.

Well, it was some stormtrooper's birthday last night and they were having a pizza party with cake and ice cream. The birthday boy eats a ton of crap, like five or six pieces of pizza, two or three pieces of cake, and a whole bowl of ice cream. When those guys want to pack away the food they can do it.

So the clones see this, but there isn't enough pizza and cake left for them to eat that much. What do they do? They start destroying the locker rooms and the lounge area and everything they can get their hands on. They're basically rioting until the officers bring in more pizza and cake.

Then it just gets insane. The officers bring in about two hundred pizzas and twenty big cakes for these guys and the clones just start tearing them apart with their bare hands. I have the security video of this. I've seen Rancors eating that wasn't as gross and they were eating people.

If you haven't figured out where this story involves me, stop a second and think about what happens when about a hundred identical dudes eat way more food than they should all at the same time. They carpet bombed the heads within a half mile radius of the barracks. Every toilet jammed full of stormtrooper loaves and too much toilet paper.

I'll have to go back tomorrow for some more follow-up work, but spending all day in the maintenance crawl space I have found five ruptured pipes and two that will have to be shut off and unclogged manually.

There's flooding, water damage on level 6, and the whole area stinks because the shit has gotten into the ventilation. I'm just glad my job ends with the IWS work, because custodial is going to have a nightmare on their hands.