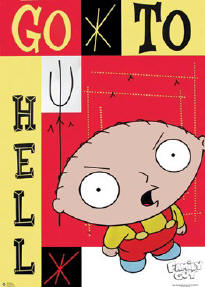 Downing his second "Ooze" pie, Seth pulled out a small boombox from under the table. In it spun "Family Guy Bluegrass Hoedown," the fifteenth CD in a series started after Family Guy's 2005 revival. As the voice of Peter Griffin sang out "Turkey in the MacGuyver," Seth's classic take on "Turkey in the Straw," Seth harmonized with the nasal voice of America's favorite cartoon character, in the process spraying expired pie crust and "Ooze" all over our table. "Listen to how great I sound here!" Even though he had been singing for upwards of five hours, both his voice and the smell of fermented pie filling were absolutely intoxicating. I quietly inched the volume of the CD down, and Seth's eyes lit up with rage. Promising I would listen to him more later, I asked about the start of the greatest piece of animation ever crafted by human hands, Family Guy.

Seth's cartoon set the world on fire when it premiered after 1999's Super Bowl XXXIII, and historians will no doubt mark MacFarlane - not John Elway - as the real MVP of the night. Seth told me, "I expected that kind of reaction. I mean, America had never seen an animated family with a fat husband, attractive wife, smart kid, dumb kid, and a baby." Seth took this unique grouping one step into further uniqueness by adding Brian, the Griffin family's talking dog. "He's a really smart dude, but sometimes his dog side comes out and it totally conflicts with that. Like, he could be drinking a martini one second and humping a couch cushion the next," Seth explained. "People probably ask, 'Who comes up with this crazy shit?!' I've got news for them."

MacFarlane's creative juices flow much further than the concept of a talking dog. "Rememberization," one of the comedic theories behind Family Guy, may throw many people off with its brilliance. Seth explains, "It carries over from my college films. People enjoy seeing things that they recognize, so if Darth Vader shows up in the Griffin's attic, it's totally fucking awesome. People often ask me, 'Where's the joke?' I tell them, 'Fuck you. Darth Vader's in their attic! He's totally out of place! That's funny!'"

And people do think it's funny. A look at most internet message boards during airings of Family Guy reveals that fans of the show love to play along as they laugh at recognizing things they remember. It's not uncommon to see pages and pages of Family Guy threads with nothing but posts that read, "lol Perfect Strangers!" or "Doc Brown OMG!!!" Just like Pompeii, these threads - frozen in time - will show future societies what our culture valued most.

As our interview continued, I began to learn more and more about Seth's unique comic sensibility. In the middle of one of my questions, the cartoonist began to make high-pitched squealing noises. He continued as I became annoyed, then bored. But after five hours of this, I exploded with laughter. This reporter is not ashamed to admit that he peed just a little in his Stevie Griffin boxers. "I just revealed to you MacFarlane comedy theory number two," Seth said, swishing Ecto Cooler in his mouth and spraying it in the face of a passing Entertainment Weekly reporter.

Seth explained to me the theory that creates of some of Family Guy's most popular jokes: "You know that episode of The Simpsons where Sideshow Bob keeps stepping on rakes? At first, it wasn't that funny, but at the end I actually had to be hospitalized due to asphyxiation! During my recovery, I thought, 'Wouldn't it be great to have a show full of jokes just like that?'" To illustrate his point, Seth suddenly belted me in the face. After I fell out of my chair, he brought his heel down forcefully, inches from my windpipe. Instead of crushing my larynx, Seth flashed a green-stained smile. I couldn't help but laugh out of awkward relief. 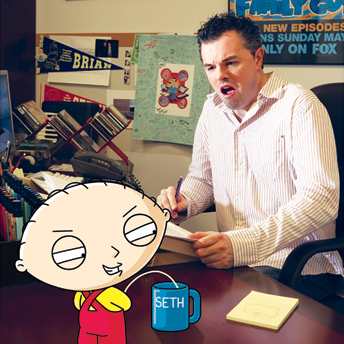 Stevie is just one of the hundreds of characters that Seth voices in each episode of Family Guy.I finally got it.

But not all people do. Family Guy was cancelled in 2002 after a controversial political episode. Seth explains, "We were the only ones with the balls to call Bush an idiot." The particular joke in question began with Peter Griffin saying, "This reminds me of the time that President Bush was retarded," followed by a cutaway to the President being retarded.

Tragically, the world was robbed of Seth's brilliant political commentary for three years. However, the re-running of Family Guy on Cartoon Network's Adult Swim nine times a day created a new, vocal fan base. Fans demanded a return of the show and an end to the Dark Age of comedy that had started when Family Guy originally left the air. About this, Seth proudly stated, "Critics said all these fans had some new version of Stockholm Syndrome. I don't know what the hell that means, but look at how much fucking money I have!"

As with any work of genius, despite its success and the millions of dollars in MacFarlane's bank account, Family Guy still has its detractors. A sore spot for Seth, he ranted, "A lot of people have a problem with the way we create episodes of the show." Seth went on to describe the unique writing process of the show: "Along with the references, I have all my writers come up with the craziest, most out-of-place shit we can think of, like... a cougar on a fucking water slide! After we have about twenty minutes worth of content, we ask ourselves, 'What situations could the characters be in where these things would come up?' When we can't figure out an answer to this question, we just ignore it. Who cares, we're fucking hilarious!"

I brought up a recent episode that critics were unfairly lambasting, their reason being the usual whiny cry of "The plot just didn't make sense!" But Seth has some criticism of his own for these misguided fools: "Listen, I'm going to tell you what I tell all critics. Number one, I don't see you with your own cartoon, tough guy. Number two, you guys totally need to chill out, it's just a cartoon. Number hippopotamus [Haha, there's that MacFarlane absurdity again! -ed.], if you don't like it, then why are you watching it? I encourage all of my fans to respond to criticism of the show this way. It makes those fuckers so pissed off. Since humor is subjective, what right do they have to say what's funny and what isn't? Besides, I'm the funniest motherfucker on the planet."

Seth's custom cell phone ring - a clip of him singing the Family Guy theme song - interrupted hour nine of our interview. His eyes lit up like he had just been given an enormous sack of Rubix cubes. Seth stood up and held out his hand, "I gotta sail, Bob. There's this awesome Flash cartoon on the internet that my assistant just discovered, and we've got to put this fucking thing on the show. It's not stealing if it's on the fucking internet, right?" I nodded in awe. It's not very often that mere mortals get to bask in the presence of gods, but here I was. As Seth walked away, I wanted to cry out, "Take me with you!" so I could get rid of these traditional views of comedy that I've been lugging around like so much baggage. But some of us don't deserve to walk with gods.

That day, there was one set of footprints. Seth was carrying me.