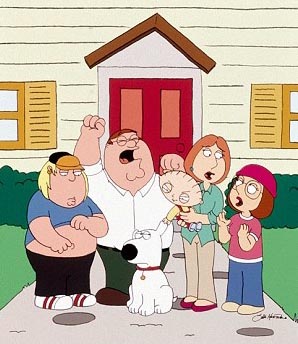 These goofs are on a collision course with hilariousness!Move Over, Don Bluth - Seth Breaks Into Animation

"Want some Big League Chew?" I felt a firm hand on my shoulder and heard a soothing baritone voice. Seth had just gotten back from the Q&A session following the DVD screening, and sat himself at a special catered table filled with the cartoonist's food and drink of choice: Ecto Cooler and Teenage Mutant Ninja Turtles "Ooze" Flavored Fruit Pies. "I might shit myself silly from eating all of this food, but it's&" Seth looked at me, as if as if I could possibly finish one of his genius comedic sentences. Hypnotized by the neon green pie filling covering the lower half of his face, I could say nothing. All of a sudden, Seth pulled a pair of glasses from his front shirt pocket and stuck them on his face. "Freakin' sweet!" he said, in the voice of TV's most original sitcom dad, Peter Griffin. And you know what? We laughed ourselves retarded.

I dipped my hand into the pouch and pulled out some of the gum strands that were now solidified into one giant clump. He smiled as I attempted to chew it: "Hey, remember this shit? It's shaped just like chewing tobacco! Well, at least it used to be. Don't worry, you won't get that sick!" As the piece of fossilized gum jagged its serrated edges down my esophagus, I swallowed the blood that was pooling in the back of my throat and got down to business. The business of Seth's creative life.

MacFarlane, after spending the majority of his childhood and teens absorbing the magic and wonder of the 1980s, found himself traveling nearly eight miles from his childhood home to attend the auspicious Rhode Island School of Design in 1991. Dean Mark Rollins received quite a surprise with Seth's entrance; instead of handing in the standard 8-page application form, Seth instead chose to make his intentions clear with what can only be described as something right out of an episode of Family Guy. Seth explained, "I'd written my application on a series of 34 Lite-Brites, and I pulled my pickup truck next to the entrance of the Dean's Office. As soon as I got that bastard in my sights, I pulled out a bullhorn and shouted, 'Hey, you remember these? It's only been a few years, but weren't these things awesome?!'"

With Seth's entrance, Mark Rollins' alcoholism increased to dangerous levels, and the two seemingly clashed heads more than the time there was a head-clashing contest at the zoo [boy Seth, this is a lot harder than it looks -ed.]! Rollins explains in an archived interview, "MacFarlane's senior project was to make a short comedic animated film. You know what he did? He just assembled a bunch of pictures of items from the 1980s. When I played it for the class, all that bastard did was laugh his ass off. There weren't even any jokes! There's even a rumor from some of the students that he laughed so hard that he soiled himself. What? He's a millionaire now? Oh sweet Christ." I felt the need to give Dean Rollins a call because, honestly, what kind of a jerk can't appreciate MacFarlane's genius? After a bit of research, I discovered that Rollins killed himself shortly after that interview, which seems more than appropriate for someone who wouldn't understand Family Guy.

Tragically, he wouldn't be the last.