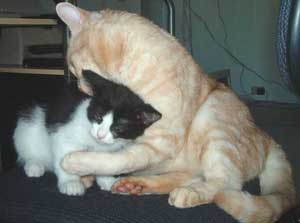 I'm going to love eating all those tasty emails. Suckers for a sob story, we adopted a kitten who was found wandering on the side of the road after having watched its mother get run over by a Buick. I asked if they had any kittens who weren't already screwed up but they didn't so off we went with another lost cause.

The kitten, a chatty little thing, was black with white trim. My girlfriend decided to name her "Moocow" because "she's black and white like a cow that goes moo" and because we aren't very creative people. I wanted to name her Cathy after my favorite comic strip.

Of course, no one ever told me you had to feed a kitten that can run at the speed of light a diet that was different than what you would feed a cat that never moves during the course of a month so we ended up with a very small adult cat. I wanted to rename the cat Muggsy Bogues after the famous women's' basketball coach but I was outvoted at our weekly couple's counseling meeting.

For what Moocow lacks in size she makes up for it with a complete disregard for our belongings. Moocow has so far chewed up and destroyed two Xbox controllers, four speaker wires, two battery chargers, three USB cables, five pairs of headphones, two satellite radio antennas, the United States Constitution (no wait, that was GEORGE W. BUSH LOL) and a countless amount of clothes. I regret not buying the warranty. Not for our stuff, but for the cat. 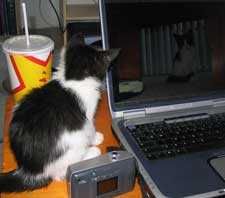 STOP WATCHING ME MASTURBATE.But my most pressing issue with Moocow is trying to find some time away from her to jerk off. She'll ignore me all day. She'll run away when I try to pet her. But the second I take my dick out she comes running and sits on my desk and stares at me.

Believe me, I have tried to ignore her and masturbate with her watching but it's really uncomfortable and just isn't the same as when people watch. You might be into that sort of thing and I'm not one to judge, but it's not for me. If I put her in the other room and lock the door she ends up pulling up the carpet and does her best to ensure that we are denied our rent deposit whenever we decide to move out of this apartment complex that's not unlike that creepy apartment complex in Silent Hill 2 where the pyramid head rapes retarded monsters. That happens here all the time.

Because Pancake has had such a hard life he tends to take it out on girls (think he's a goon?!). When Moocow is sitting somewhere just minding her own business, he'll suddenly decide he wants to sit where she is and proceeds to attack her, claiming the top of the broken computer monitor, that he broke, as his own, even when she called dibs. 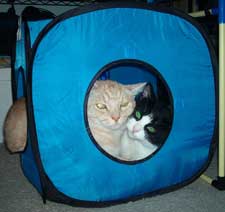 One time they even got along. It's a wonder what a couple of beers can do.It isn't all heartache though. The most fun we have as a family is when Pancake tries to mount and rape the smaller cat. Despite the fact that he's neutered and doesn't know what the hell he's doing, he'll bite her neck and try to stick it in there but despite cheering him on it never goes in. Someday, old pal. Someday...

Now that I think about it, there's really nothing remarkable about my cats and they are pretty much the same as every other pet in the universe. I have always despised people who "blog" about their pets but now I am one of them. When Lowtax used to write about his pets I would secretly lose respect for him. Sure, we kept up appearances for the kids and neighbors, but it was never the same after that.

But it's all worth it if it means hundreds of adoring emails in response to a shameless update filled with cute cat pictures. Here's some now! 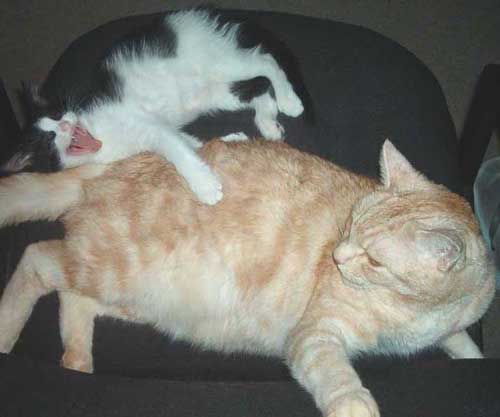 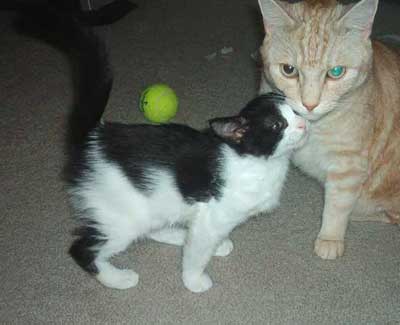 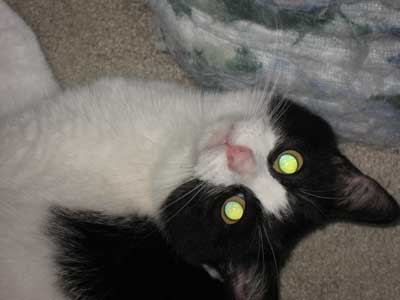 My email address is below.