What Are All Those Medals On Sheriff David Clarke's Costume? 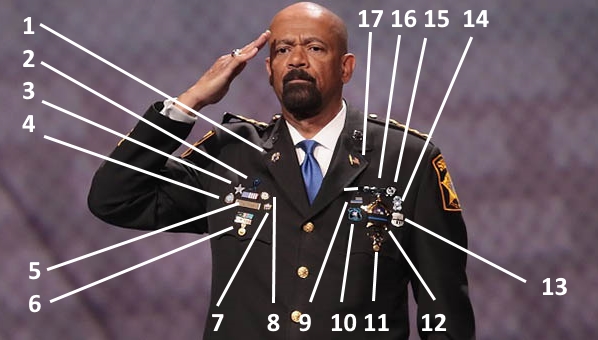 1. Nightwatch Brigade Insignia
Awarded for hiding in a coat closet and watching God's Not Dead, God's Not Dead 2, and Last Man Standing on a 1980s-era portable tv every night instead of sleeping

3. Loyal Patriot Badge
Bought 10 fake medals, got this one free

4. Strong America Good Award
Defended the president on tv in a shamefully transparent attempt to curry favor, which worked, because of course it did

8. Courage Under Fire Medal
Sustained numerous injuries while attempting to don an oversized cowboy hat, the inside of which had been lined with fake medals

9. USA USA USA
Granted for putting on an air of surety and toughness that shows he definitely isn't an insecure idiot

10. The Freedom Award For Distinguished Plagiarism

11. The Brave Patriot Cross
Called for an uprising when Obama was president, then successfully kept a straight face while claiming that Trump critics need to be suppressed

13. Sheriff's Badge
One of these things must be real so I'm guessing it's this one, but I might be giving the guy too much credit

15. Joe the Plumber Medal of Honor

16. Freedom Veteran Badge
Served twenty tours of duty as a talking head on cable news without deploying a single reasonable or coherent point

17. Charlie's Rest Stop Steakhouse Medal of Accomplishment
You ate the whole thing - gristle and all - in under an hour... nice job!