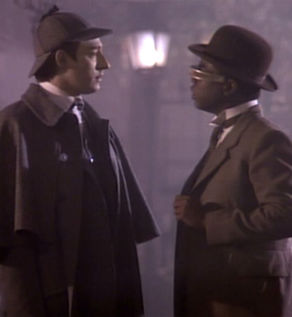 Sherlock holmes weild the nunchuckus and strike out another one of Moyardees soldiers. The banister break and soldier fall going AAAAAAAaaaaaaa THUMP when he hit the stone in courtyard. "MIND THE GAP" holmes say and look down then as he turn back a sword is swinging at him as another soldier attack.

Meanwhile Watson is down below fencing with Moyardee while the ceremony blade lowers on clara who is screaming. She is wearing just a little bit of clothes and you can see her stomach and bellybutton and the way she is breathing nervously. Watson is over the match with Moyardee and he is cut on his cheek by a playful slash. HE IS TOYING WITH WATSON!

"pity&" moyardee laughs "I would have rather killed you holmes, not your laggey."

Moyardee lunch at Watson with sword. Watson paraodies with his own blade and steps aside. Moyardee's blade cut the rope holding the knife over Clara. The knife fall, but holmes throw his own knife just then and it deflects the knife.

Watson has no time to celebrate. Moyardee grunts with outrage and slashes with his sword and this cuts into Watson badly. He seems dead, but he will be okay after Sherlock Holmes kills Moyardee.

"NO!" Sherlock Holmes yells when he see Watson fall down. "I will kill you Moyardee!" 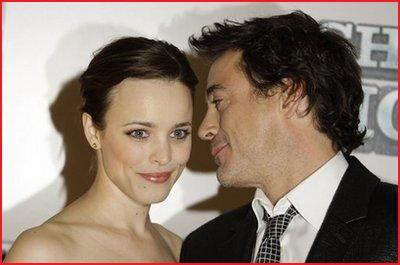 The explosion tear apart Moyardee's castle. Watson and Sherlock holmes and clara play by rachel macadamas is thrown to the dust. Watson get up and make sure his girlfriend is oaky.

"I quite alright," she said annoyed. "really watson!"

She pushed him away but then holmes said, "I get a kiss baby. Put it on my lips."

They go in for the kiss, but instead of a rude rondo they get up and begin to dance. They look at the camera with great intensity and move their hips. There is a enchanting rhythm. Some more people in bright color parachute pants come out and begin to dance also.

Clara sing a song in hindi about the cow tender's daughter who go to town to buy yogurt and nan and come back with three baby. Sherlock Holmes play the rude M. Soonie. Watson is the father and also the mother.

Credits begin to roll while dance go on.