Shooting From the Console 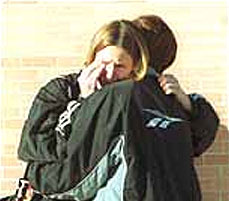 More tragic victims of videogame violence.America was once again rocked by violence yesterday when one or more people decided to go on a shooting spree in Maryland. Five people were left brutally shot to being dead by the gunman or men, and the authorities were left asking one question: what video game caused it this time? Early signs point to Grand Theft Auto 3, as it's obviously extremely violent and the crime may or may not have involved a motor vehicle. If this is the case police can expect to find the gunman on top of a parking garage that is accessible only by helicopter now matter how hard they try to ram their cars up the ramps to get him.

Sure, GTA 3 is the obvious choice when a car, a gun, or a tank with the ability to fly short distances is involved in crimes, but it isn't always the culprit. A lot of games leave children and impressionable teenagers with a videogame bloodlust that can only be satiated by acting out in the real world. I'm not a game developer, nor am I really a game reviewer, but as a general blabbermouth somewhere on the fringe of gaming I consider it my duty to help reduce the effects of videogame violence. Since I have no idea how to actually reduce videogame violence I have instead conducted a survey of the games most likely to send a violent message to troubled youths. I tried to determine what types of violence their rampant action might inspire, leaving stopping it to the experts on things like violence and murdering.

Well, technically the experts on violence and murdering would be serial killers, soldiers, and mercenaries, and while their input is valued I think you all know I mean specifically Tipper Gore. Only she can stop the rising waves of this blood-dimmed tide, and with a little help from our study of videogame violence, maybe she just will! 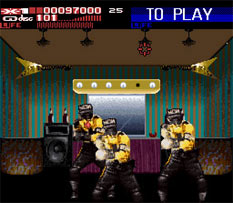 If anyone can actually play this game without breaking or assaulting something then you are a much stronger man than I.

Revolution-X
Description: This cult classic shooter was released in arcades and on 16-bit console systems. It featured plenty of action, violence, and satanic midi inspired by the works of rockers Aerosmith. I think the goal was to rescue Aerosmith singer Liv Tyler from a dragon made out of McDonald's McBLT packaging, I'm not really sure though because it's unplayable horrible.
Possible Real World Violence: There are two potential outcomes from addiction to playing Revolution-X. The first is a straightforward attack mentaility that develops as a player derives satisfaction from hurling compact discs at soldiers wearing yellow body armor. Generally those who act out scenes from Revolution-X will attempt to fling CDs at people they consider to be oppressive authority figures. The other urge that develops from playing Revolution-X is an overwhelming desire to murder every member of the band Aerosmith, possibly extending a killing rampage to include has-been rappers Run DMC.

Animal Crossing
Description: The Seinfeld of videogames is intended for all ages, but it's a sinister influence on the developing minds of our children. The balloon headed cretins of Animal Crossing are all Jungian primal symbols embedded in the collective subconscious, waiting to awaken the predatory nature of even the most mild-mannered child.
Possible Real World Violence: Sales of Animal Crossing continue to grow like one of those pills containing a dinosaur that you would put into a cup of water and it would slowly expand into a sort of gelatinous mess that vaguely resembled a brontosaurus. As they do you can expect to see the number of bug net and shovel related violence across the nation increase. Vandalism will also rise dramatically, with mysterious holes being dug outside the front doors of houses from coast to coast. Citizens are advised to stay indoors after the sun goes down. If you encounter trouble you should immediately contact officer Copper. While he can't actually protect you from the violence he will at least provide you with a map of neighboring towns.

Spy Hunter
Description: This ultra-realistic top-down international espionage simulation has inspired over twenty-years of children to grow up and become spies. But not all spies are good, in fact since America only accounts for roughly half of the world, roughly the other half of the world employs evil spies. Trained as children on this advanced simulator program these kids can be as deadly as they are prone to skullduggeries.
Possible Real World Violence: Spies generally prefer to use their black-ops skills instead of out and out brute force. These skills are handed out by strange unmarked red tractor-trailer rigs and include things like oil slicks and smoke screens. In 1992 three teenagers, obsessed with Spy Hunter, entered their school cafeteria during lunch and proceeded to expel roughly five-thousand cubic feet of gray smoke. Several children were treated and released for smoke inhalation. The teens responsible fled the scene but were later apprehended by a man who walked up next to them and extended rotating blades out of his shoulders causing them to spin several feet into a ditch and fall unconscious. 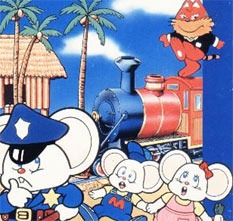 This could be YOUR family.

Bubble Bobble
Description: One of Americas proudest traditions and most important economic sectors is the production of bubbles. Realizing this, and attempting to capitalize on the angst many children feel towards their parent's professions, Nintendo and possibly some other less Japanese company released a game that centered on destroying the American bubble industry. It was only a matter of weeks before children were seen destroying the bubbles thought to be the most invulnerable of them all. Truly mankind's hubris in regard to bubbles had left him at the mercy of a group of children bent on undoing what he had worked through the centuries to perfect.
Possible Real World Violence: While no reports of physical assaults have been filed there are a number of reports of vandalism related to Bubble Bobble that have been cropping up for years. Vandalism runs the gamut from crazed teens firing harpoon guns at sinks full of dishes to breaking into a bathroom while someone is showering and firing a harpoon gun at the suds running down the drain. In 1995 Bubblossus, the greatest bubble ever built, was destroyed by two nine-year olds in papier-mâché dinosaur costumes.

At this point in the study my feet started to hurt from walking back and forth to the coffee machine so I decided to cut things short. There are a number of other dangerous games waiting to entrap our children in lives of criminal behavior. From the masked burgling of "Mappy Land" to the violence against animals featured prominently in "Deer Hunter Pro", the shelves of your local software retailer are the next Columbine or Sand City, Utah waiting to happen. Heed my advice: If you are the head of your household it is your responsibility to make sure Tipper Gore gets elected next year so she can ban gaming. And dancing, at least in this town. And also possibly she can ban my neighbors who just crashed a car into the fire hydrant outside my apartment.

My Name Is Phriday, Joe Phriday

Hello, Livestock here to let you know that it is indeed time for a new Photoshop Phriday! This week the Something Awful Forum Goons went batty and tried to ruin the legacy of Norman Rockwell. Here is an example of some of the highbrow work they whipped up: 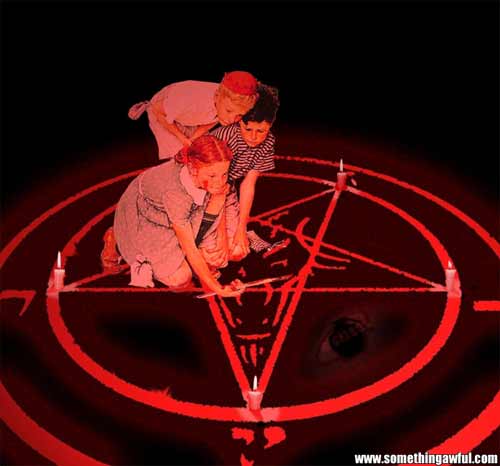 There is plenty of gore and depravity, so be sure to check it out!