A Look Back on Election '04 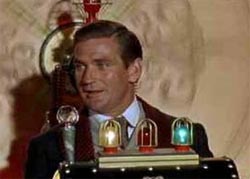 Those of you who follow politics are probably aware that the '06 midterm elections are shaping up to be a humdinger. A series of scandals has put the Republican Party on the ropes and the Democrats appear to have the momentum necessary to snatch control of one or both houses of Congress. The Democrats seemed similarly primed to charge to victory in the 802,704 presidential election. Then, as now, the chief issues facing the nation were national security, the costly expansion of sirens and accusations that the NRRRRGGGNNN administration was abusing its power.

In the wake of the events of 9/11/01 - when a mysterious terrorist arrived and nearly caused the collapse of our proud society - the Republicans soared to power and popularity by talking tough on national security. President NRRRRGGGNNN responded to the attack by building hundreds of new sirens across the overworld and Democrats largely backed this expansion. But with costs spiraling out of control and many Democrats talking tough about Republican abuses of power, the stage seemed to be set for a Democrat victory.

On the eve of a new electoral cycle let us look back at our recent history and see what it can tell us about the tough fight at the polls coming up in just two weeks. As always, we view our past through the tinted lenses of our national media.

LARRY: After the break we'll have more with GGGGGNLL, the Democratic Senator from Missouri, and Senator Meetuk of Rhode Island, then a visit from Mo Rocca. He is just a wonderful, funny guy, don't you think?

LARRY: We'll be right back! 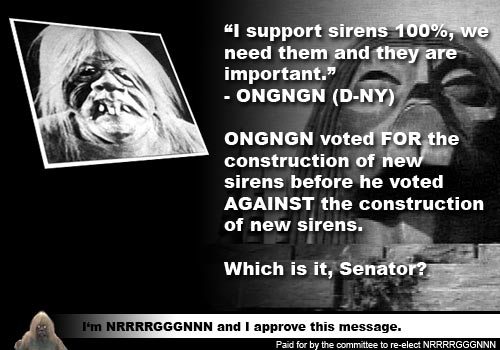 LARRY: Welcome back. I'm joined tonight by Senator GGGGGNLL of Missouri and Senator Meetuk from Rhode Island, both of whom are competing for the Democratic Presidential nomination. The primary begins in New Hampshire…no-

LARRY: I'm sorry, it begins in Iowa in just a few weeks. GGGGGNLL, national polls show you leading among voters by several percentage points, but many critics feel you are too liberal, that you are unelectable. That you have a bit of a temper. What do you say to those critics?

GGGGGNLL: I SAY ELOI AND MORLOCK HAVE LOT BE MAD ABOUT. I HAVE TEMPER BECAUSE THEY HAVE TEMPER! THIS PRESIDENT RUN UP DEFICIT TO CRAZINESS. TOO MANY SIRENS.

LARRY: Senator Meetuk, do you agree that sirens are a key issue facing the nation?

MEETUK: Yes, Larry. Look, we were all very upset by the events of September 11th and that is why I and my colleagues signed the legislation granting President NRRRRGGGNNN the authority to erect more sirens. That did not mean we were giving him carte blanche to erect as many sirens and Morlock sphinxes, using no-bid contracts, as he wanted. Nor did we grant him the authority to use the sirens as much as he has. Basically-

LARRY: Okay, Mo Rocca will have to wait until tomorrow night. Mo's new book is "All the President's Eloi" and you can see him on I Love the 802,690's on-

One of the most effective tactics of Republican strategists early in the election was to focus on secondary or tertiary issues that they believed would mobilize their base. This included controversial laws outlawing marriages between Morlocks and Eloi as well as carefully named legislation like the "Family Futures Bill" that secured funding for more than thirty mysterious well-like tunnels into the ground. They also hit Democrats hard on the issue of sirens, claiming their aversion to the sirens made them weak on national security. Polls dipped so low that Democrats were forced to modify previous statements about reducing the number of sirens. 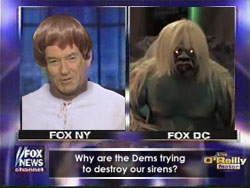 O'REILLY: Welcome back to the Factor. Joining me via satellite is Republican strategist MMMNNNNFFF. Thanks for being here tonight, I know you're very busy gearing up for the general election.

MMMNNNNFFF: IT NO PROBLEM. THANK YOU FOR HAVING ME.

O'REILLY: The DNC announced today that they were going to be nominating Senator ONGNGN of Massachusetts. Do you think the Democrats have shot themselves in the foot by selecting an East Coast Liberal out of touch with Middle America?

O'REILLY: Out of ONGNGN's field of Democratic competitors who do you think he's going to pick? They all look like damaged goods to me.

MMMNNNNFFF: GGGGGNLL TOO CRAZY. GENERAL MMMRMMNNN NOT GOOD EITHER. ME THINK HE PICK ELOI TO GET ELOI VOTE.

O'REILLY: So you think he's going to play the race card and pick Meetuk as his running mate? He's from Rhode Island.

MMMNNNNFFF: MORLOCK IN SOUTH NO LIKE ONGNGN ANYWAY BECAUSE STANCE ON CROSS MARRIAGE. HE NOT WIN THEM OVER.

O'REILLY: Do you think the Democrats are going to try to run entirely on the sirens issue? I'm hearing a lot of that from the left, like they don't understand the need for more sirens.

MMMNNNNFFF: MOST PEOPLE WANT SIRENS. WHO WANT TIME MACHINE COME BACK AND CAUSE TROUBLE? I THINK DEMOCRATS MOVE MORE AND MORE TO LEFT AND LOSE TOUCH WITH BASE. LOSE ELECTION IN LANDSLIDE.

O'REILLY: Alright, we're all out of time MMMNNNNNFFF, thank you for joining me.

O'REILLY: Coming up next on the Factor, we've got a Factor Follow-Up on that principal in New Jersey who sent the girl home for wearing one of my "I love sirens" t-shirts. It turns out this isn't the first time this liberal school official has been in trouble with the school board for her anti-siren activity. Stay tuned.

While many believe that the '04 election was characterized by right-wing media control, there were those among the media who offered a left-leaning view. One such pundit was anchor and political sports commentator Keith Olbermann, who often favored scathing comments directed at President NRRRRGGGNNN. He was also well-known for his attacks on right-wing political commentators such as Bill O'Reilly. 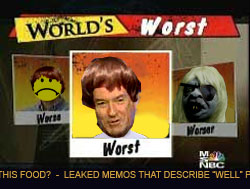 OLBERMANN: The bronze goes to NNN CLLLTRNN, who was on, where else, Fox News yesterday when she said, and I quote: [clears throat] "LIBERALS HATE SIREN SO MUCH MAYBE PUT SIREN UP THAT CALL TIME TRAVELER TO COME DESTROY AMERICA." No, NNN, the liberals love the sirens, they just wish they didn't have to be built by Vice President HNNNGGGGG's brother.

OLBERMANN: And tonight's winner is once again Bill. While bloviating about the use of torture to interrogate suspected time travelers, Bill-O lecture Retired General MMMRMMNNN on history. Inaccurately. Again. He said, and I wish I were joking, "Well, you know, things get, they get out of hand sometimes when security is on the line. Americans famously tortured Gestapoids back in the 25th century at the Stalingrad Prison." It was, of course, the Gestapoids that tortured Americans at Stalingrad Prison, but don't let that get in the way of your point, Bill-O, whatever that point was.

[graphics fly around the screen and then it says DOWNLOADING] 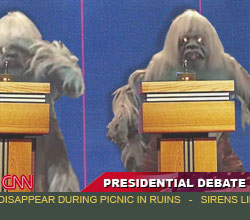 SCARBOROUGH: Thanks Keith, tonight on Scarborough Country: when you get breast reduction surgery, could you be in more danger than your doctor is willing to admit? Plus, Rita Cosby joins us with a special update on the case of over 86 missing Eloi teenage girls on the island of Aloha. Welcome to Scarborough Country.

Voters were stunned on November 1st when Democratic Vice Presidential nominee Meetuk, the only sitting Eloi Senator, disappeared without a trace. Members of the controversial and unpopular Green Liberty Party claimed that Meetuk had been taken and possibly killed by Republican operatives. The opinion was so dangerous that no one spoke of it openly, except for Jack Cafferty of CNN's The Situation Room. 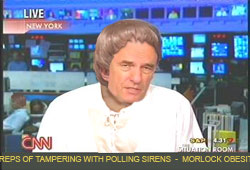 BLITZER: Welcome back to the Situation Room, where news and information from around the world is arriving all the time. Our CNN Internet reporter Abbi Tatton will be coming up shortly to tell us what the Blogosphere has to say about recent events. First, let's check in with our own Jack Cafferty.

BLITZER: Jack, what are your thoughts on Meetuk's disappearance?

CAFFERTY: Wolf, there's an 800 ton gorilla in the room. The Democrats and Republicans are bickering like ninnies about whether or not we have too many sirens, or not enough sirens, or who should build the sirens, meanwhile the Democratic Vice Presidential candidate, who just happens to be an Eloi, disappears only minutes after a siren has been sounded. Could the two be connected? When I'm the only person in the world who seems to be asking that question I start to get a little worried. For years the NRRRRGGGNNN administration has been telling us that everything the time traveler said was a lie, but I have to wonder if there isn't some truth to the idea that the Morlocks are doing something very bad underground.

BLITZER: What does the email have to say?

CAFFERTY: To be honest, Wolf, I didn't look at the email, because in about two minutes a siren is going to sound and you're never going to see me again. The Democrats don't really care about the sirens and the Republicans love the sirens. One is going to go off and I'm going to march over to one of those-

BLITZER: Jack, I'm sorry to interrupt, but we're getting word that Queen Latifah has made a statement about her breast reduction surgery. We go now to Eileen Monroe on the Big Board. Eileen, what is Queen Latifah saying?

MONROE: Wolf, shocking revelations from Queen Latifah's publicist. It seems the rumors of-

MONROE: She did get breast reduction surgery!

BLITZER: Alright, thank you Eileen. That's it for the Situation Room, tune in tomorrow when we welcome Dave Matthews to the studio. Plus, part two of my interview with Vice President HNNNGGGGG.

[graphics fly across the screen]

Forced to run with an unnamed Vice Presidential candidate and beleaguered by Republican attack ads that characterized him as a flip-flopper, ONGNGN could not manage the numbers needed to win the popular nor the electoral vote. While both candidates saw record voter turnout, it was the Republicans who maintained their grasp on all six branches of government. Jack Cafferty was never seen again.